The Fox Theater was transformed into an Electric Church on Friday for an exciting musical tribute to Jimi Hendrix.

Friday night, the Fox Theater was at capacity with a sold out show featuring various artists and their well-crafted instruments. For everyone in attendance, this exciting moment would last for three hours.

Opening up the night was the classic song “Freedom.” Billy Cox played the bass, Chris Layton was on drums, and Dweezil Zappa had his guitar at the hip. These three musicians started the night off on the right foot.

Up next, guitarist Mato Nanji joined the trio to do an incredible version of “Stone Free.” This song had the audience singing along and stomping their feet.

A round of well-deserved applause for Dweezil as he left the stage and another cool cat slid onto the stage. This time, vocalist Henri Brown stepped in and got down’ with another classic “Foxy Lady.” Henri is a natural entertainer and Friday he was on point.

As the song came to a close Henri waved some goodbyes and the stage was greeted by the amazing Ana Popovic on guitar. Ana performed a version of “House Burning Down” with Scott Nelson on bass and Dweezil Zappa on guitar. Anna also played “Can You See Me?” and was accompanied by Mato Nanji on guitar who blended in with Ana’s guitar playing style perfectly.

While Chris Layton and Scott Nelson would play out the first half of the show on their respective instruments, the stage would now be welcoming guitarist Eric Johnson, vocalists Noah Hunt and Henri Brown. This group of musicians started out with “Wait Until Tomorrow.” Noah Hunt and Henri Brown shared the vocals while Eric Johnson performed flawless note for note solos of Jimi’s licks.

With both Noah and Henri leaving the stage Eric played “One Rainy Wish” and “3rd Stone From the Sun.” Eric combined the actual guitar riffs and solos with creative inversions especially on 3rd Stone From The Sun. 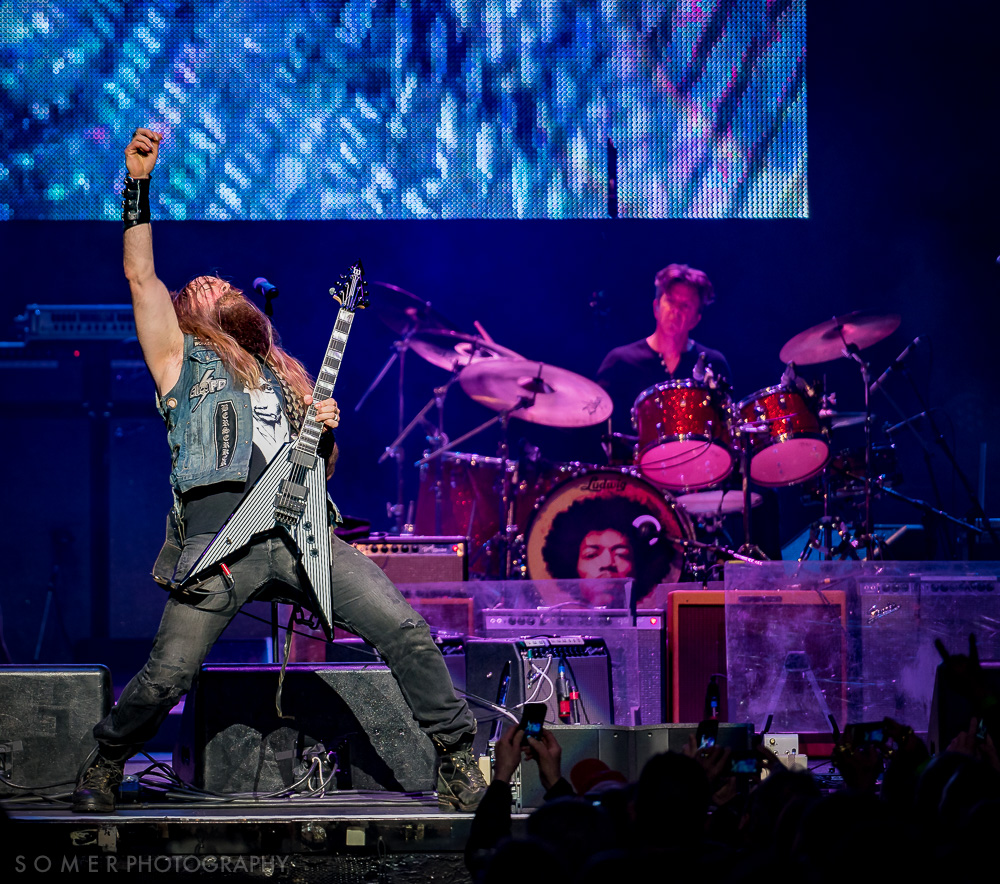 The next song would have a guest piano player that not too many people would have expected; Zakk Wylde. Yes, Zakk Wylde plays piano and does so quite well. Eric took the band straight into “Are You Experienced?” They did this anthem some justice.

Once finished Zakk stood up and gave Eric a standing ovation for his guitar work. Once the audience took their seats they were unaware that Zakk Wylde had left the piano, grabbed his guitar and was about to bring the end to the first half of the show with some style. “Manic Depression” was first up on Zakk’s list and boy was it solid. Zakk did a great job with the vocals while hammering out Jimi’s riffs.

As the lights dimmed a single spotlight came upon Zakk and the beginning of “Little Wing” started. Zakk took Jimi’s solo to a whole new level. The speed and accuracy were astounding. At one point Zakk jumped down into the center aisle and walked down 15-20 rows to give some unsuspecting fans a close up of his blazing guitar ability. Zakk closed the set and the first half of the show with Purple Haze.

Opening up the second half “Hear My Train A Comin'”, “Angel” and “Hey Gypsy Boy/Hey Baby/In From The Storm” by Doyle Bramhall II. Doyle’s guitar work and vocals complimented the original recording nicely. Doyle was a great addition to the night’s lineup and made Jimi smile with his tasteful approach to the original works of Jimi Hendrix.

Up next Johnny Lang on acoustic delivered a heartfelt version of “All Along The Watchtower.” He was joined on guitar by Mato and Zakk. Exchanging his acoustic for an electric guitar Johnny and Eric pulled off an epic twist of the song “Fire.”

Once the fire had settled, Mato paired up with Johnny for a take on “Spanish Castle Magic.” Johnny seemed to be having a great night both on guitar and vocals.

Speaking of vocals, vocalist Noah Hunt and guitarist Kenny Wayne Shepherd joined in and brought tons of energy with creative versions of “Gypsy Eyes” and “Come On” Kenny gave the audience some entertainment with the famous playing the guitar behind your head move. 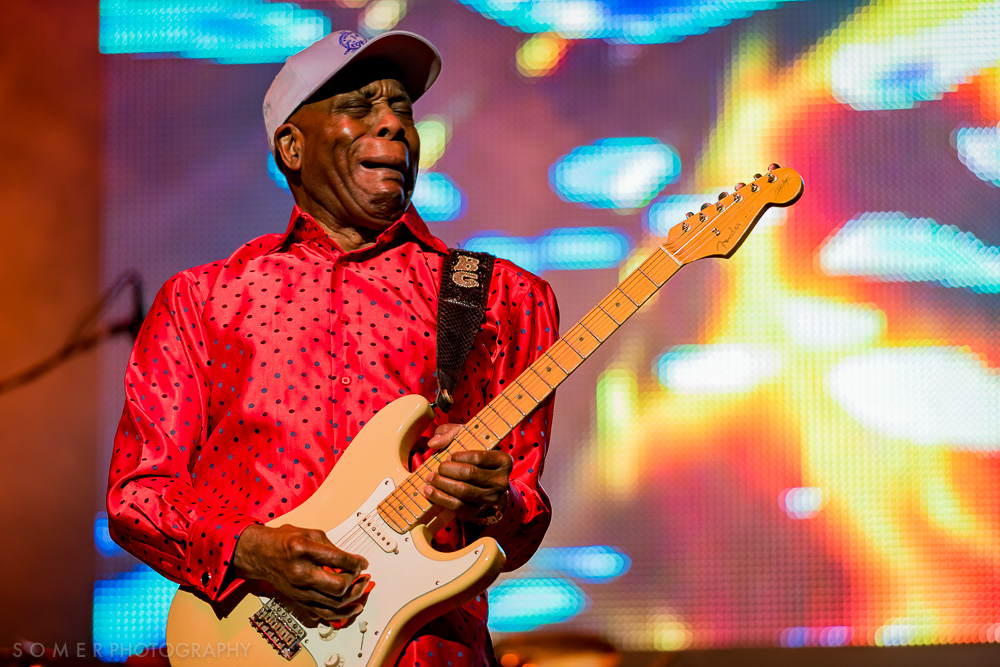 Noah brought powerful vocals to the next song, “Voodoo Child,” and Kenny’s smooth guitar work made everyone in attendance feel like they just heard Jimi.

Closing out the night was Buddy Guy and he brought his good friend, Buddy Cox, back on stage to close out the night. Buddy and his Damn Right Blues Band simply put brought the house down. The vocals in “Who Knows Fanfare” and the funky guitar work in “Louisiana Blues” sounded amazing. Buddy sang and played the guitar with such passion that it made you feel like you were a part of his show. “Hey Joe” was sung by Billy Cox and most likely everyone in the sold out show. It was loud and beautiful.

Mato and Henri came out and joined Billy and Buddy and together they played the last song for the night “Them Changes.”

The show came to a close with all the musicians standing front and center and bowing. They shouted many thanks to the audience for their support. Professional rockstars!

Once the house lights came on, Buddy Guy walked to the front of the stage and handed out guitar picks to some fans. One fan, in particular, was talking to a friend about how he hopes that Buddy will see him and get his autograph. Well, that’s exactly what happened. This fan held up a Buddy Guy album and ink marker for Buddy to sign. Buddy held the album and put his signature on it. Buddy along with all the musicians that night gave each fan at the sold out show one unbelievably cool memory to hang onto.