Embrace hit the road across the UK in support of their incredible seventh studio album Love Is A Basic Need.

Tonight the indie five-piece makes a welcome return to the North East of England whilst performing in front of a packed out crowd at the Riverside in Newcastle. This being the start of the Easter Bank Holiday break and the second night of the tour, it doesn’t take long for it to get hot and sweaty.

Embrace released their critically acclaimed new album in March and tonight they take the opportunity to showcase their latest offering. As the band hit the stage they immediately launch into one of their freshest cuts in the shape of “Wake Up Call” which is followed in quick succession by the classic “All You Good Good People”. Tonight’s flawlessly arranged setlist is the perfect blend of new and nostalgia.

Frontman Danny McNamara prowls the edge of the stage all night long, arms raised aloft as he leads the Geordie choir into many a singalong. Throughout the course of the show, Embrace performs the lion’s share of Love Is A Basic Need, with seven of the ten tracks on the record included in the set. This includes the incredibly infectious and somewhat atmospheric “Rabbit Hole” along with “Where You Sleeping” which features guitarist Richard McNamara on lead vocals.

The beauty of the band’s new material is that it sits so well alongside Embrace’s classic cuts, of which there are many. The crowd tonight are treated to a myriad of indie anthems including hits like “Come Back To What You Know”, “Someday” and an emphatic airing of “One Big Family”.

The band slow down proceedings with the thought-provoking title track of their new album. The song is delivered with such passion, belief and authority that it feels like “Love Is A Basic Need” has become the band’s mantra. Each of the new tracks in the set are well received by the Tyneside audience.

As Embrace hurtle towards the finish line, they close out their main set with a pair of old favourites in the shape of “Gravity” and “Ashes” from their 2004 album Out of Nothing. Departing the Riverside stage the crowd continue to sing the latter, which in turn creates a beautiful atmosphere inside of the room.

During Embrace’s encore, a standout moment of the evening is their beautiful rendition of “Never”, which features a spellbinding duet between Danny McNamara and opening act Eevah; this track is certainly a future classic in the making. The band also takes the opportunity to give a live debut to “Snake Oil” before bringing the night to a close with “The Good Will Out”.

With Love Is A Basic Need Embrace are back to their very best; this beautiful and eloquently crafted album truly comes to life when performed live. 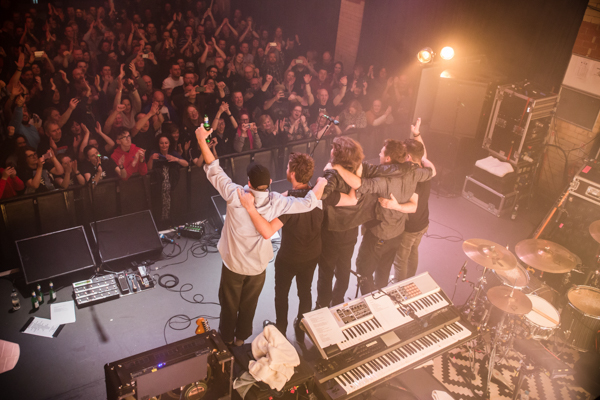