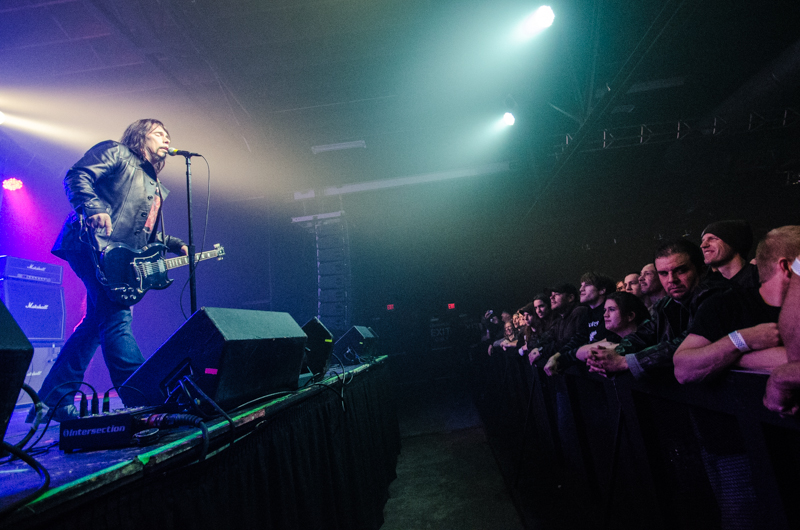 New Jersey psychedelic space rock veterans began their first U.S. Tour in 10 years last night at The Intersection in Grand Rapids, MI and what a night it was. Having seen the band on their last US tour in 2003,  I knew what to expect and the guys did not disappoint.

Dave Wyndorf and the boys rolled through classics such as “Dopes To Infinity”, “Spine Of God”, “Power Trip” and “Space Lord” as well as a couple tracks from the bands latest effort “Last Patrol”.

Last Patrol was released on 10.15.13 via Napalm Records and is the first release since 2010’s “Mastermind”.

According to Wyndorf, “Last Patrol” is “a return to our roots in terms of vibe and recording style. It’s full-on psychedelic space-rock with a ’60s garage feel, recorded almost exclusively with vintage guitars, amps and effects in our hometown of Red Bank, New Jersey”.

Here is a link for the bands latest video release “Mindless Ones”.

Direct support for Monster Magnet was provided by Atlanta, Georgia progressive power trio Royal Thunder who is touring in support of their 2012 Relapse Records release “CVI”.

CVI was recorded, produced and engineered by Joey Jones of Aria Studios with whom the band has a long standing personal and working relationship.

Founding member and guitarist Josh Weaver has a unique style and his performance was outstanding. Vocalist and bassist Mlny Parsonz captured the audience with her powerful voice and stage presence and drummer Even Diprema kept it all together.

Local rockers “Tru-Burn” and Oklahoma Metallers “Anti-Mortem” got the crowd ready and did an admirable job.

If you happened to miss the 11.14 date at The Intersection, the tour will be making a stop in Detroit tonight 11.15 at Saint Andrews Hall.

With Monster Magnet nearing the bands 25 year anniversary,I recommend you don’t miss it because who knows when your next chance will be..

Don’t miss this one.