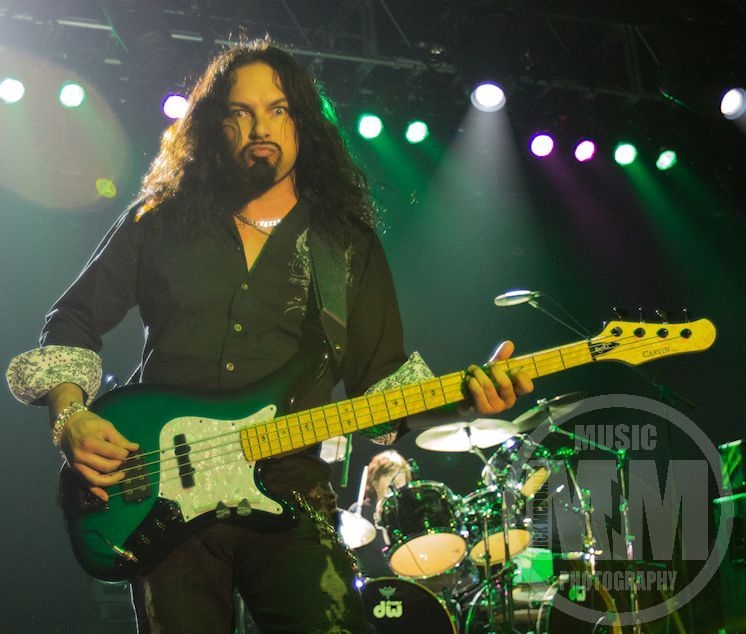 For well over 40 years, Ronnie James Dio lived and breathed to create Metal Music. Ronnie James Dio was a true metal icon and he was most certainly one of the most beloved and well respected purveyors of the Metal Genre that began in the mid 70â€™s and early 80â€™s.

His passing in 2010, seemed to signify the end of an era.  But, in the fine tradition of the genre that Ronnie helped create the DIO DISCIPLES carry the Metal torch in his honor and memory. I feel it is unfair to even call the DIO DISCIPLES a â€œtributeâ€ band as it seems to lessen the true depth of who and what this band is about. The DIO DISCIPLES are comprised of musicians and personal friends of RJD.

The lineup of musicians who have played in the DIO DISCIPLES since the formation of the band in 2011 reads like a whoâ€™s who of metal spanning (4) four generations of the genre including former members of DIOâ€™s band, Judas Priest, AC/DC, Yngwie Malmsteen, and Lynch Mob (just to name a few).

Their set list includes songs by DIO, RAINBOW and BLACK SABBATH. This is certainly far more than a tribute bandâ€¦ it is DIO himself reincarnated in the echoes of the instruments played by his former friends and bandmates. I canâ€™t even raise a horn-fisted R.I.P. for Ronnie because after attending two incredible nights of Metal that was delivered so flawlessly by the DIO DISCIPLES I know that Ronnie James Dio is not deadâ€¦ he is alive and well and lives on in the soul of his fans and in this band.

The bandâ€™s current lineup includes Tim â€œRipperâ€ Owens and Oni Logan on Vocals, Craig Goldy on Guitar, Bjorn Englen on Bass, Scott Warren on keys, and Simon Wright on drums. Throughout this tour Tim and Oni shared vocals, alternating songs, with some songs sung by Tim and some by Oni, and some songs sung together trading vocal duties back and forth. But the (2) shows I attended in Michigan Tim â€œRipperâ€  Owens carried the vocals alone as Oni was off tour briefly for some family time.

Being fully sanctioned and authorized by (no less than) three bands to perform their songs, the music catalog that DIO DISCIPLES have to choose from is immense. It is a curiosity to me as to how these guys come up with a setlist! At the Soaring Eagle Casino they were scheduled to play for an hour and a half set. Some schedule changes at the venue pushed their original set time back an hour, but they still played more than a full hour set, (about an hour and 20 minutes) with 2 encoreâ€™s.

Their set runs the gamut of top hits and a few lesser recognized tunes (except to die-hard DIO fans) from DIO, Deep Purple, and Black Sabbath, and Judas Priest. The entire bandâ€™s performance of these songs is something stellar and almost magical.

Tim â€œRipperâ€ Owens vocals carried powerful and strong throughout the long set, all the way to the double encore, a true testament to the strength of his vocal abilities and his devotion to honoring RJD. A definite highlight of the show is when Ripper stops and addresses the crowd  in between songs and shares a few anecdotes about his relationship with Ronnie, and asks the crowd of fist-pumping fansâ€¦ â€œWhy are we ALL here?â€  and the crowd answers in unisonâ€¦DIO!

The Dio Disciples are a solid unit. As I stood side-stage and watched each member of the bandâ€™s contribution I recognized the spirit of Ronnie in each of them as they closed their eyes and swayed along to the rhythm and machinations of their playing.

I recommend this show to fans of Ronnie James Dio, Tim â€œRipperâ€ Owens and to fans of every band that this supergroup of musicians have played with and/or influenced.  STAND UP and SHOUT! ~KK

SETLIST:
Killing the Dragon
Holy Diver
I
Egypt (The Chains are On)
Stargazer
Push
The Last in Line
Stand Up & Shout
Donâ€™t Talk to Strangers
Lord of the Last Day
All the Fools Sailed Away
Catch the Rainbow
Kill the King
As Long as Itâ€™s Not About Love
The Mob Rules
Long Live Rock & Roll
Man on the Silver Mountain
Heaven & Hell
This is Your Life
Rainbow in the Dark (Encore)
We Rock (Encore)