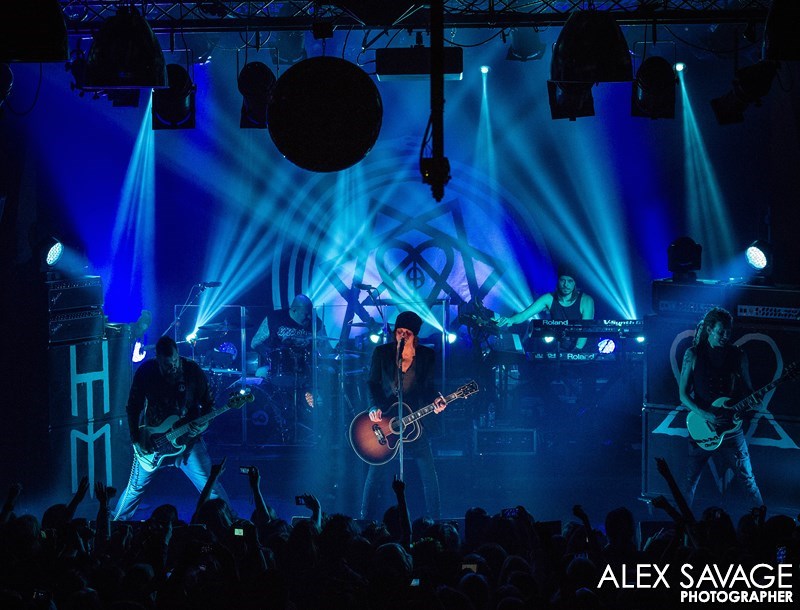 Way up north in the land of the ice and snow is a forgotten country called Finland. Â Most people are more aware of the customs and history of their neighbors of Sweden and Norway. Â With an impossible language, interesting food, and potent yet noxious beverages galore, Finland is most known for having the highest concentration of rock and metal bands in the world. Â One could say there is something in the water, or perhaps the vodka. No other band from there is more recognized, respected, and revered than their native sons, HIM.

Having formed in the mid nineties and gaining American popularity in the mid two thousands, HIM remains more of an underground anomaly whom should have been mega superstars by now, but perhaps their standing is by choice. With a twenty year career under their belt, those who may have thought HIM were a flash in the pan, reality show celebrity fan favorite are sadly mistaken. Â Having been awarded with the most dedicated fan base by Metal Hammer just last year, you think you’d hear them all over the radio by now even after dropping their latest offering,Â Tears On TapeÂ last spring.

They may not be as huge here as they are in Europe, but sold out gigs and long band signing lines prove that HIM still has a foot hold here in the USA. They toured with Volbeat, All That Remains and Airborne during the Monster Energy Rock Allegiance tour last fall gaining new fans stateside before continuing more European dates abroad and ending the year with a bang at their annual Helldone Festival in their native Finland.

Going as far back as 1992, HIM has played on New Year’s Eve at Tavastia Klubi, the club where the band got their roots and became bona fide rock stars. Since 1999 the tradition has continued by playing fourÂ gigs over the course of four days in Finland, but always ending in Helsinki back at the club where it all started.

Tavastia Klubi is now far too small to house their sound or their fans, but tradition is tradition and seeing them where the band started with tons of fans from all around the world is something special indeed. Tickets for the Helsinki NYE gig sell out in less than five minutes and I can attest to that personally. It’s a destination vacation not for the faint of heart. It’s a long flight and you never know what kind of weather you’ll end up with at the end of December south of the Arctic Circle in the fabled country of Santa Claus referred to as Joulupukki by the locals. Just so you know, they eat reindeer in Finland and it’s damnÂ tasty.

This year, HIM and their annual Helldone Festival toured the Finnish cities of Oulu, SeinÃ¤joki, Tampere and Helsinki. Helldone and its capital city of Helsinki becomes a meeting place for fans from all over the world to connect in person instead of the usual social media outlets. Â The band itself knows there’s something unique about Helldone and the celebration it brings. Â They always add something special to their set list and to their attitude when playing the festival they created so long ago.

It was my second time attending and covering Helldone for their Official Fan Club, Heartagram Team, and my first time for National Rock Review. The mood this year as opposed to last year was palpable. I was able to cover their gigs at Pakkahuone, Tampere and Tavastia, Helsinki.

For me, HIM has turned a corner in their performance. They sound better than ever live with an impressive and fun to photograph lighting show, even if Tavastia is known for being challenging to shoot in. Â Adding older songs like For You, In Joy and Sorrow, and Death Is In Love With Us to their set list sent fans in a frenzy; you were hard pressed to hear vocalist Ville Valo sing over the roar of the crowd boisterously singing along to songs they haven’t heard played live in ages.

It was only a couple of years ago when the future of the band was uncertain when drummer Gas Lipstick was afflicted with a condition that affected his arms forcing the band to take a hiatus. Â The band has been together so long and all the players are more like a band of brothers as opposed to replaceable hired guns that going on without him might not have been an option. Â As Gas healed and new material was written, HIM took up the torch again to the delight of all their dedicated fans. With new life and a foreseeable future, HIM is back in the game again and ready to score big.

HIM usually selects colorful and unknown bands as support and this year was no exception with local bandsÂ Odalisque,Â Beastmilk, andÂ Pertti Kurikan NimipÃ¤ivÃ¤t. Â I’d have to say the standout for me was Beastmilk, with their catchy melodic post punk sound. I liked what I heard and have to check them out more when I have some free time.

Most unexpected would have to be Pertti Kurikan NimipÃ¤ivÃ¤t. Seriously, don’t even try to pronounce that. They are a band composed of learning disabled rockers who kicked ass, gave the crowd plenty of piss and vinegar attitude, played in time, and sounded like a punk rock MÃ¶tÃ¶rhead. Â It’s great seeing dudes with adversities like that live life and eat it up while leaving the audience confused and bewildered as to what they just witnessed. Bravo!

Odalisque isÂ sort ofÂ a shock rock band that looked like it crawled out of a cyber goth club. HIM’s guitarist’s kid brother, Jude Natas plays drums for the band. While they were interesting and fun to watch, I sort of got lost in the theatrics of the band to the point where I wasn’t really listening to their music. By the time I snapped out of it, their set was over.

I’ve had the pleasure of breaking bread and hanging out with Mr. Valo, and he’s one of the most down to earth, intelligent, and funny people I have met in the last year. Â I’m proud to call myself a HIM fan and am grateful for getting to work with HIM and the doors they have helped open for me professionally. I will continue to cover them when they come back to the States in March for a headlining tour starting on March 7th at the House of Blues on the Sunset Strip in Los Angeles, then continuing in major US cities throughout the month before ending in South America in April. Do yourself a favor and catch one of their live shows and judge for yourself. Tickets on sale now through LiveNation/Ticketmaster.