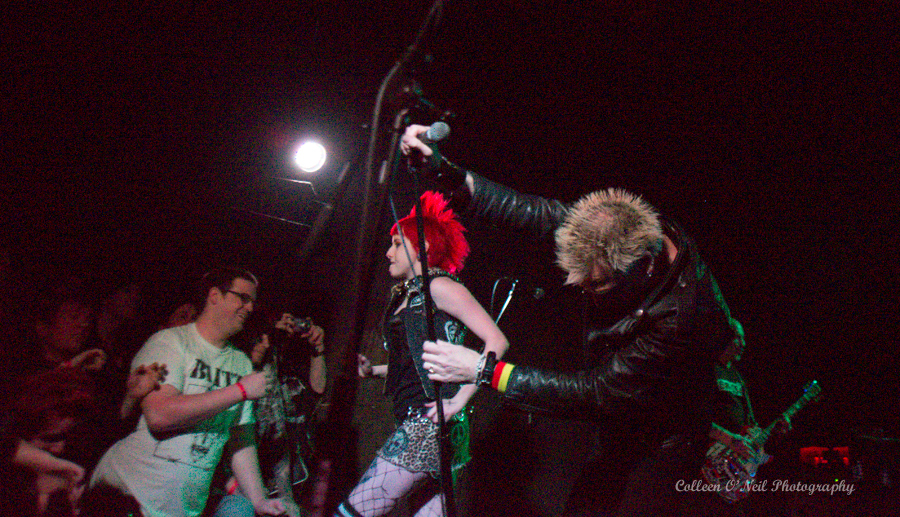 What more can I say about GBH (Grievous Bodily Harm) that hasn’t been said in the past 34-plus years? They are legendary punk icons from an era that produced a number of punk bands that went away as quickly as they appeared. Only a few survived and GBH is one of them. They are a rare gem to have continued on.

I was fortunate enough to see them when the iconic punk rockers from Birminghan, UK, made their only 2014 US appearance at Fubar in St. Louis, Missouri to celebrate fellow punk rockers Scene of Irony’s tenth anniversary.

People of all ages from all across Missouri and beyond (Wisconsin, Texas, Illinois, Kansas, and Iowa, to name a few) packed Fubar to capacity. From the front door to the back bar, it was a sea of leather, studs, piercings, mohawks, and hair color from every spectrum. Local acts Echo Morse, The Red Handed Bandits, and Opposites Attack opened the show with a steady build up of energy. They definitely got the crowd pumped for Scene of Irony and GBH.

GBH (also known as Charged GBH) formed in late 1979 and is one of the forerunners of the UK82 sound. They are fronted by vocalist Colin Abrahall, Colin “Jock” Blythe on guitar, Ross Lomas on bass, and drummer Scott Preece. The band’s energy hasn’t decreased over the past three decades. As someone who has seen them on multiple occasions, I can say they have improved with age.

As their set progressed, one person after another made it onto the stage. Some to stage dive and others to sit in front of the monitors or sing along with the accommodating Colin Abrahall. With so many years of experience, none of this phased the band in the least. They played non-stop with only a pause here and there to help a fan who requested to be allowed to exit at the side of the stage, instead of diving off.

Formed on April Fool’s Day in 2004, Scene of Irony has quickly become a St. Louis favorite. Comprised of Maurice (Moe) Holmes on vocals and guitar, bassist Shaughnessy Denney, Donnell Robinson on drums, and guitarist Shawn Combs, the foursome has played all over the immediate area and well beyond; not only a wide range of US states, but as an opening act for GBH’s UK tours.

Scene of Irony ripped through their raw and aggressive set that included their original songs as well as a powerful cover of MotÃ¶rhead’s Ace of Spades. They got the already pumped crowd into further mosh-pitting frenzy.

Earlier opening acts, Echo Morse, Red Handed Bandits, and Opposites Attack, put out solid and entertaining sets that were a perfect lead in to Scene of Irony’s 10th anniversary and the iconic and legendary GBH’s stellar performance.