It is a “cherry-filled night” as the headliners receive support from Black Stone Cherry and the Cherry Bomb Dancers.

10-May-2016: The southern rockers of Black Stone Cherry have continued to grow a strong fan base with each album released. They are out supporting their current album,Â Kentucky, but that did not stop them from playing the hits everyone knows and loves.

The band came out to the roar of the crowd as if they were the headliners. Starting off the night with “Me and Mary Jane,” they had the fans jumping, singing along, clapping their hands, and pumping fists in the air.

BSC continued to play hits such as “Blind Man”, “Blame It On The Boom Boom,” and “White Trash Millionaire” but also playing newer material like “In Our Dreams” and “Soul Machine.”

Nearing the end of their set, Black Stone Cherry performed one of their biggest and fastest hits, “Lone Train,” but that was not all she wrote. The band ended their set honoring the late passing of Motorhead frontman Lemmy Kilmister. The lights went out, and the guitar began to play “The Ace Of Spades.” The crowd followed along singing the iconic metal track with lead singer Chris Robertson. As their set ended, fans cheered as the openers left the stage.

As fans waited for Buckcherry to play, the lights went out and on came the Cherry Bomb Dancers. The dancers pride themselves on versatility, featuring high-energy dance and specialty acts such as acrobatics, fire handling, and pole dancing. They have toured with bands Saving Abel, Saliva, Jackyl, Puddle of Mudd, and more.

The Cherry Bomb Girls did everything you could imagine by playing with fire and amazing choreography in their dances when solo and in groups. They pumped up the crowd, keeping fans entertained during an extended soundcheck. 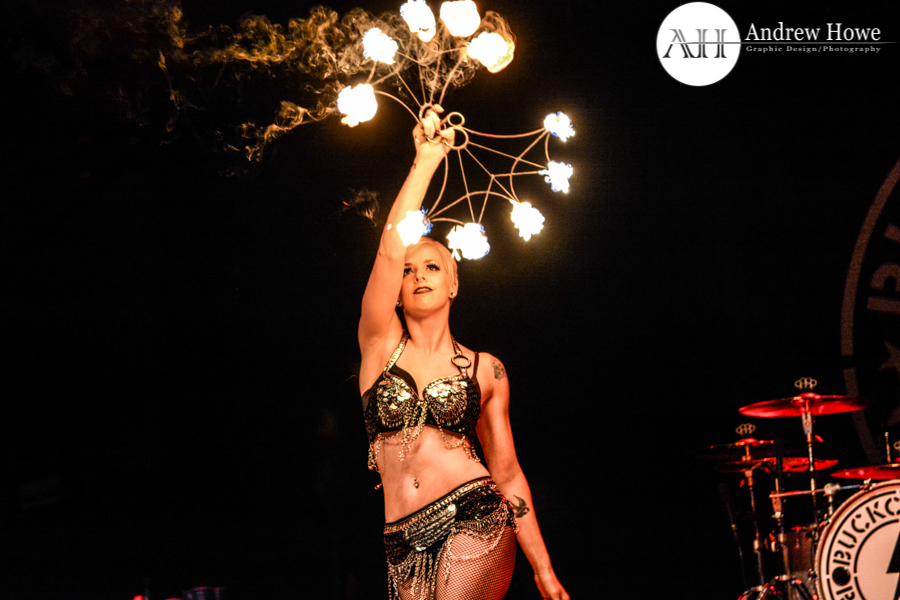 Buckcherry took the stage following the beautiful ladies and starting their show with “Lit Up.” Outside of a hiatus from 2002-2005, the LA rockers have been moving from success to success since their 1999 self-titled debut album and the Woodstock festival the same year.

The band is out supporting their latest album, Rock ‘n’ Roll, which has a different sound compared to past Buckcherry albums. Frontman Josh Todd made it clear by saying he wanted to change it up and so that each album has a distinct sound. The Rock ‘n’ Roll album has more of a dance vibe rather than hard rock.

They continued their set by playing more new material and cuts from the Fuck EP. However, Buckcherry stayed true to their roots, playing fan favorites, “Sorry” and “Crazy Bitch.”

When hearing the new material, many were unsure of how to respond. But after listening to a few songs, the fans were digging the new stuff and begging for more. Buckcherry took a huge chance in exploring a new musical direction. So far, it appears to have paid off.

Will fans ever hear another album like 15 or will they continue on the route they are going? With Buckcherry, it is hard to be certain, given their willingness to try a new path. It is surprising and keeps their sound fresh.

For their encore, Buckcherry performed their rock n’ roll cover of Icona Pop’s “Say Fuck It” from their Fuck EP and “Too Drunk” from 15.

Buckcherry will be on tour this summer. Adelitas Way provides support for the first leg of the tour and Nonpoint for the rest.