Artificial Agent and Tommy Marz Band showed the crowd at Smallâ€™s that Detroit rock nâ€™ roll can be heavy and fun, all at the same time.

Marz played an eclectic mix of old-school alt-rock tunes from his previous band, GoToZero, mixed with a litany of late-nineties alternative and grunge covers plus a brief taste of his upcoming album, Bringing Alpha. Throughout the set, Marz (guitar and vocals), Chris Alef (bass), and Jason Tucker (drums) kept the crowd jumping with surprises, medleys, and good old-fashioned rock and roll.

The set began with a brief homage to Black Sabbath before the band segued directly into Seven Mary Threeâ€™s â€œCumbersome.â€ Marz captured the gravelly voice of Jason Pollack superbly, and Tuckerâ€™s drum fills felt like the perfect marriage between Giti Khalsa and Jon Bonham.

From there, the band reminded fans of GoToZeroâ€™s debut album from 2004, The Mean Season, by launching into the staccato-rock â€œWalk Away.â€ The band whipped through the song with robotic precision, hitting every stop like clockwork. The song thundered through fast-tempo verses and into half-tempo breakdown choruses. It is unlikely anyone has seen a guitar player jump as high as Marz jumps on every one of those chorus downbeats.

The third song in the set was a cover of Pearl Jamâ€™s â€œAnimal.â€ This song has been a staple in the bandâ€™s set for over a decade. The song was executed beautifully, with tons of high-energy jumps and fills.

After that, they debuted a track, â€œCannonball,â€ from their upcoming album. The song is a dizzying compilation of kinetic guitar-riffing and soaring vocals, mixed with an amazingly musical bass line. It gave the crowd just the barest taste of whatâ€™s to come in Marzâ€™s forthcoming double-album, due later this year.

The band then played another throwback tune from The Mean Season, â€œThen The Sun.â€ Marz told the audience that this was the first time they played it live but you would never have known it, given the way the band pulled it off.

Then came one of the crowd’s favorite sections of their set. The band started out with a cover of Silverchairâ€™s â€œTomorrow,â€ which the crowd immediately recognized. Alef and Marzâ€™s guitars formed a thick, beefy riff over Tuckerâ€™s eerily precise drum rhythm, and the song just exploded with energy. The band segued directly into the title track off The Mean Season. This slow-tempo rocker was definitely a highlight of their set. Marz, Alef and Tucker truly showed that they are a live band that knows how to get the crowdâ€™s attention with this song.

The last few songs continued to grow in kinesis and power as the band covered Smashing Pumpkinsâ€™ â€œCherub Rock,â€ and segued into a brief homage to White Zombieâ€™s â€œThunder Kiss â€˜65â€ which segued into GoToZeroâ€™s fan-favorite show closer â€œWaste of My Time.â€

At the conclusion of that song, the band hit the crowd with a fantastic up-tempo cover of â€œSabotageâ€ by the Beastie Boys. The energy was amazing, the stops were precise, and Marz screamed with everything he had in his lungs. Alef just killed it when bringing the song back to life after the bridge. Pure shock and awe, and memorable like you would not believe. Smallâ€™s felt very large, indeed, as the crowd jumped with the band on this closing track. 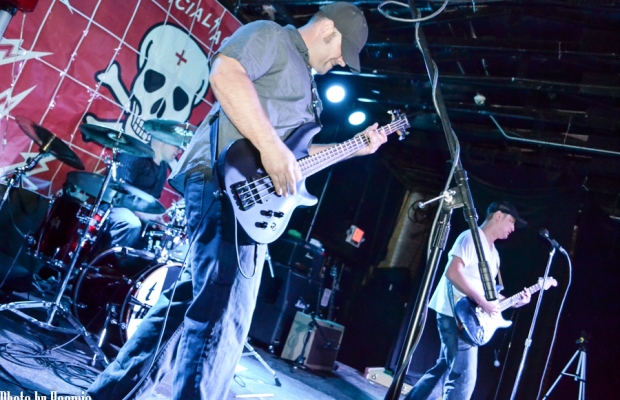 Closing out the night was hometown heavy hitters Artificial Agent. Hailing from the mean streets of Detroit, these guys are a modern-edged hard rock band with a touch of 80â€™s metal.

Artificial Agent is one hell of a powerhouse live band. Although the band likes to say they are â€œmelting glam rock with heavy metal, one note at a time,â€ you would think of it more as straight forward hard rock combining both old and new school influences to create a sound that is classic metal for a new generation.

According to an interview Brad Jendza did with Atomic Leg Drop Zine, he is a big believer that if you want something done right, you do it yourself. Jendza further stated â€œArtificial Agent is about DIY, from the production of our shows to the album productions. We customize our instruments too. Karl applies his own drum wraps. I cover my bass in rhinestones, broken glass, or metal studs. We make our own costumes or have tailors that create them from our designs we draw up. Itâ€™s all hard work, but worth it.â€

It is this attitude which has made people take notice. The band formed in the summer of 2010, and quickly made a name for themselves in the Detroit music scene and tonight Smallâ€™s was standing room only for Artificial Agent.

Already in a party mood thanks to opener Tommy Marz Band, the crowd was ready as Artificial Agent opened up their set with â€œOut Of Time.â€ The song has a modern edged sound similar to the heavier side of Papa Roach or Velvet Revolver mixed with a touch of Queens of the Stone Age. Bradâ€™s thunderous bass lines rolled along as Derekâ€™s aggressive sounding vocals were sung with such conviction.

Derek then taught the crowd â€œHow To Be Evil,â€ a track taken from their debut album Love Wonâ€™t Strangle Me. Reminiscent of an Alice Cooper song, the band hit every note with such precision showing their onstage prowess. They followed this up with â€œPsychomotor Agitation.â€ This song is a pure rocker with a catchy chorus that gets you singing along. The song is full of attitude but the chorus keeps it playful and fun.

Next up was â€œNot For The Innocent.â€ Although a cover of the classic KISS song, the guitar work is reminiscent of Dokken. Itâ€™s a good thing Artificial Agent pay homage to both KISS and Dokken as they pulled off this song flawlessly.

You could definitely feel the energy level rise as the band played â€œMaster Blaster.â€ Elgertâ€™s guitar work began with a Zakk Wylde like thump then quickly switched to a classic KISS like groove. This song has lots of attitude and some in your face guitar work making it a perfect song for the crowd to pump their fist to.

After that, the band played their Motley Crue sounding cover of â€œHelter Skelter,â€ which was originally recorded by The Beatles. They quickly followed up with the title track off their newest release, â€œBrain Grenade.â€ With its heavy groove, Grenade starts out with a classic bluesy Black Sabbath feel while Derekâ€™s vocals reminded me of the darker side of Alice In Chains.

Derek had the crowd in the palm of his hand as the band broke into â€œAnother Punch In The Face,â€ a song that hits you right in the face. Elgertâ€™s repetitive guitar intro feels like a runaway train not able to stop on the tracks. The song hits hard from the first to the last note. Bradâ€™s background vocals are a pleasant contrast to Derekâ€™s growling vocals. Derek seemed to growl more on this one, giving it an old-school mid 80â€™s Detroit hardcore vibe.

They ended their set with â€œTurbo Slutâ€ before playing their encore. The song is about your classic groupie, but Artificial Agentâ€™s female following has turned it into a sect of the bandâ€™s fans. This devoted following attend all of their shows and some might call them the bandâ€™s unofficial street team as they help spread the word around about the band.

For their encore they gave the audience their choice of hearing a Motley Crue cover or a KISS cover. The audience had a hard time deciding, so Artificial Agent decided for them. They went way back into the Crueâ€™s catalog pulling out a perfect rendition of â€œCome On And Dance,â€ which they executed every stop and start perfectly.

Artificial Agent took no prisoners this night in Hamtramck. Derek snarled and growled out the words with such vigor, he sounded happy and angry all at the same time. Elgertâ€™s guitar work reminded me of the heavy simplicity of John Christ mixed with the delicate intricacies of George Lynch. Bradâ€™s bass rhythms reminded me of some old-school Kyuss mixed with a modern flare of Velvet Revolver. And, Crafton held down the rhythm with his cool Red Sparkle 26â€ Bass Drum led Ludwig drum kit keeping the perfect back beat flowing and the band in sync with each other. This, along with outrageous soloâ€™s and killer guitar riffs made you either want to bang your head, pump your fist in the air, or play air guitar with all your might.

Artificial Agent is one of those rare bands that make their CD sound like a controlled rage and when let loose… the walls shake, the earth moves, and you know Rock nâ€™ Roll is alive and well, especially in Detroit.