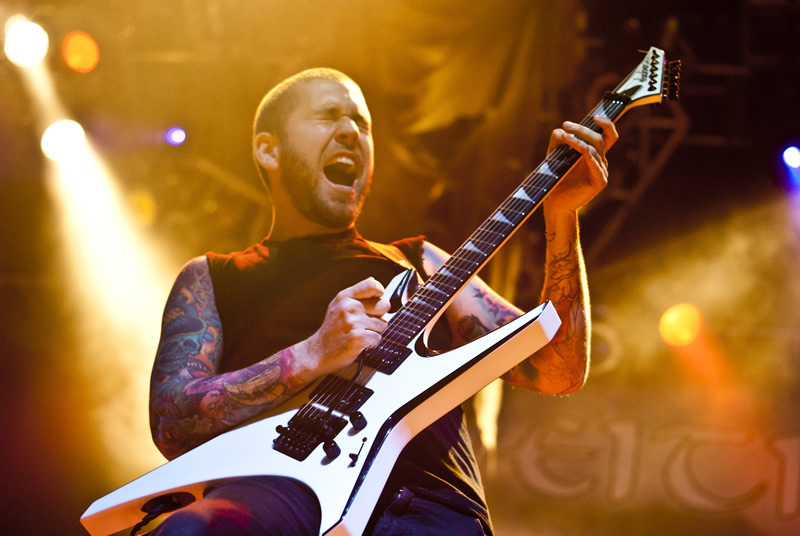 Revocation lead singer and guitarist Dave Davidson has teamed up with Guitar World for a guest column and video lesson series. The column debuts in the February issue of the magazine, which is on sale now, and will run in every issue for the foreseeable future. Video segments for each of Dave’s columns will be available at GuitarWorld.com.

Davidson is excited to be working with Guitar World: “I’ve got a new video lesson series streaming now on GuitarWorld.com. Transcriptions from the lessons will be published in the magazine starting with the February issue so head to their channel, check out the video and pick up a copy of the mag. I hope you find this ‘thrash course’ in Shredology to be informative and stimulating.”

Managing Editor Jeff Kitts adds: “Dave joins a long, illustrious list of celebrity instructors who have graced the pages of Guitar World magazine during our 34 years in publication–from Kirk Hammett, Dimebag Darrell and Tony Iommi to Mark Morton, Alex Skolnick and Alexi Laiho–and we are thrilled to have him on board. He’s an ace player and dedicated teacher, and we’re confident that our readers will find tremendous value in Dave’s offerings each month.”

Revocation’s video for the song “Fracked” which was put together by Madeline Quinn and is a visual representation of the song’s lyrics, which highlight the environmental effects of Fracking, can be viewed HERE.

Revocation’s video for the song “Invidious” which was shot by David Brodsky (Municipal Waste, Whitechapel, Kylesa) at a sold out hometown show can be seen HERE.

Revocation’s latest release, their self-titled fourth album was released last summer via Relapse Recprds. The album is now available for order in exclusive bundle packages at The Relapse Records Online Store. The album is available in a standard CD, 2xLP and Digital Formats. The album can be ordered on iTunes.

The album is streaming in full on their bandcamp page.

Revocation is available for interviews upon request. To speak with the band, please contact the relevant publicity contact listed below. Updated Revocation news and tour information will be made available at the Relapse Records website, the Revocation Facebook page.