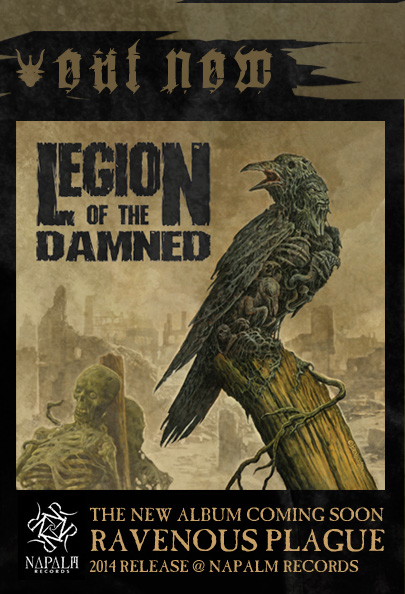 Back in 2004, when LEGION OF THE DAMNED rose from the ashes of OCCULT in the Dutch city of Venlo, where the music scene yearned for pure and brutal thrash metal. In 2005, Maurice Swinkels (vocals), Erik Fleuren (drums), Twan Fleuren (bass) and Richard Ebisch (guitar) teamed up with producer Andy Classen and entered his Stage-One-Studio (Nordrhein-Westfalen, Germany) in order to record Malevolent Rapture, a true classic of Euro-Thrash!

Eight busy and productive years later, the quartet comes full circle with the release of their latest album, Ravenous Plague, which harkens back to their phenomenal debut. Twan Van Geel took over the guitar duties from Richard Ebisch and excels on Ravenous Plague with his skills on the guitar. Hein Willekens has also joined LEGION OF THE DAMNED on stage as their second guitarist. All these changes are examples of the newly lit fire and newfound strength of the band.

2014 might prove to be yet another pivotal year for LEGION OF THE DAMNED, asRavenous Plague makes it more than clear that the evolution of the band is far from over. The return to Andy Classen as producer duties was a great move, as no one else knows the band better than Classen.  The album’s introduction was composed by Jo Blankenburg, who wrote music for blockbuster films including such as Harry Potter”, “X-Men” and “300”. Wes Benscoter, who has worked with numerous bands including Slayer, created the artwork for Ravenous Plague.  There is a storm brewing in the camp of LEGION OF THE DAMNED, and it won’t be silenced anytime soon.

The band has made one song from Ravenous Plague available for streaming.  Get a first listen to “Mountain Wolves Under a Crescent Moon” HERE.