Good news for the music scene in Detroit. Native band, Wilson, signs with label and wastes no time while the ink is drying.

Wilson is Chad Nicefield (vocals), Jason Spencer (guitar), Kyle Landry( guitar), James Lascu (bass), and Matt Puhy (drums). This five piece is known for their sense of humor, working their balls off, and been rocking the Boondocks since 2010. They are scheduled to release a new album with some high expectations. Without further ado, here’s the goods.

Begin transmission ~ (New York, NY) â€“ Razor & Tie announces the addition of the Detroit rockers Wilson to its worldwide label roster. The band recently completed work on their new album with producer Johnny Andrews (Halestorm, All That Remains, Three Days Grace) in Atlanta, GA. The album will be released later this year and the band will kick off a tour on Feb 27, 2015 in the UK/Europe with Halestorm and Nothing More.

â€œWilson is a band that is here to prove rock n roll is still alive and kicking out the jams, motherfuckers! When we thought about who would be the right label to release this monstrous record we knew that Razor & Tie was the “wham bam, thank you ma’m” home we needed! We share the same hard workin’, nose to the ground, eye to the sky mentality. With our brand spankin’ new crew set to help us take our sweet, sweet fuckery sound to the masses…we can focus on what Wilson was created to do… worldwide devastation.â€ ~ Chad Nicefield

Wilson hails from Detroit, MI and self-released one album Full Blast Fuckery in 2013. Through grass roots efforts and non-stop touring the band built a loyal following and has toured with such bands as Theory of a Deadman, All That Remains, Gwar, Jason Newsted, He Is Legend, and Sevendust. They also played a number of festivals in 2014 including Rock On The Range and Louder Than Life, playing both as the only unsigned band. Additionally they rocked the GWAR-B-Q, Earthday Birthday, Common Ground Festival, and WIIL Fest with Rob Zombie. Wilson recently played the main stage at Shiprocked 2015.

â€œThe guys in Wilson want to rule rock and so do we. We are totally psyched that they have chosen to work with us.â€ ~ Razor & Tie co-owner Cliff Chenfeld.

While the band has started their overseas tour with the above mentioned Halestorm and Nothing More, no US dates are currently available. When they do become so, National Rock Review will bring them to you. 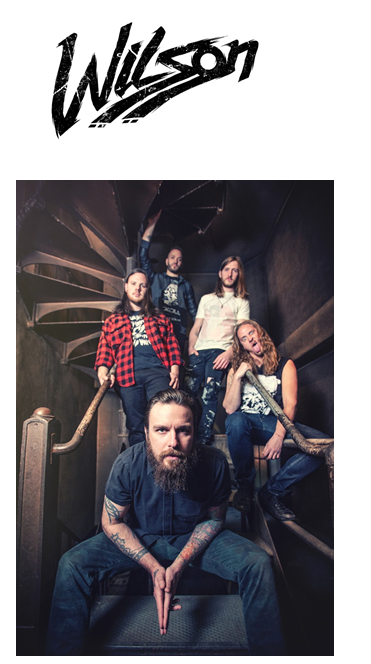