Peter Tork, bassist, singer, and co-founder of The Monkees, has died Thursday morning after a 10 year bout with cancer.

Peter Tork, bassist and singer of The Monkees, died Thursday morning at a family home in Connecticut, his family said in a statement. He was 77.

“Peter succumbed to a 10 year bout with adenoid cystic carcinoma, a rare cancer of the salivary glands,” his family announced.

“It is with beyond-heavy and broken hearts that we share the devastating news that our friend, mentor, teacher, and amazing soul, Peter Tork, has passed from this world,” begins the statement shared by ‘Peter’s friends, family and colleagues’ on his Facebook page.

“We want to thank each and every one of you for your love, dedication and support of our “boss.” Having you in our world has meant so very much to all of us. Please know that Peter was extremely appreciative of you, his Torkees, and one of his deepest joys was to be out in front of you, playing his music, and seeing you enjoy what he had to share.”

The band’s official Twitter also paid tribute to Tork with a clip of the singer.

.@TorkTweet has passed peacefully at the age of 77. We’ll be remembering him throughout the day. Share your favorite memories of Peter below. pic.twitter.com/Je57hhlXUx

Peter Halsten Thorkelson was born in Washington, DC, on February 13, 1942. A talented multi-instrumentalist, he moved to New York and became part of Greenwich Village’s famed folk scene of the early ’60s. Tork auditioned for the fictitious TV pop group, The Monkees, after his friend Stephen Stills suggested he try out for the show. Along with Davy Jones, Dolenz and Michael Nesmith, Tork would become one of the founding members of The Monkees, appearing with his bandmates on the program between 1966-1968. His lovable goofy persona on the show helped propel the band’s popularity past television. With hits including “Last Train to Clarksville,” “I’m a Believer” and “Daydream Believer,” The Monkees were one of the highest-charting acts of the late ’60s.

Tork left the bandand TV show in 1968 to strike out on his own. He team back up with Jones and Dolenz in 1986 for a successful 20th anniversary tour. In the years after, Tork largely played with his groups Peter Tork Project, The Dashboard Saints and Shoe Suede Blues. In 2016, the Monkees released Good Times!, their first album in 20 years, and their first since Davy Jones died in 2012. He also recorded several solo albums, including Step By Step in 2013 and Relax Your Mind, which was released last year. 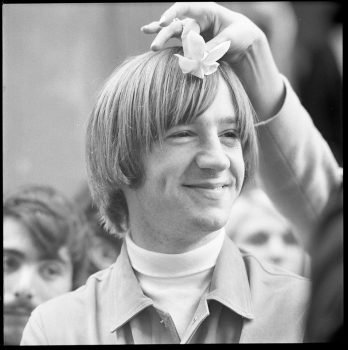 In early 2009, Tork reported on his website that he had been diagnosed with adenoid cystic carcinoma, a rare, slow-growing form of head and neck cancer. Following his cancer diagnosis, Tork wrote about his disease in a 2009 essay for The Washington Post.

“I don’t count myself as being afraid to die, but the news hit me like a fist to the chest,” he wrote, describing his decision not to cancel his live shows after undergoing surgery. “I know I’m taking a chance here, because one of the side effects of the radiation is supposed to be hoarseness,” he wrote. “The radiologist told me, ‘Well, you play guitar and you sing. Perhaps you won’t sing, but maybe you’ll play guitar a lot more.'”

Peter Tork was described by his family as a friend, father, husband, grandfather, philosopher, goofball and entertainer.