The Vikings are coming! Amon Amarth will lead a historic raid on North America with Arch Enemy, At The Gates and Grand Magus. Tickets on general sale Friday April 19th.

This September heavy metal overlords Amon Amarth will descend from the land of ice and snow to headline a history-making charge across North America with fellow Swedish warlords Arch Enemy, At The Gates and Grand Magus, and carnage is on the menu.

The Berserker World Tour, presented by The Noise will be a showcase of the riffing havoc captured on their 11th studio album, Berserker, and will treat fans to the kind of pulverising riffage and sublime, fist-in-the-air anthems the band have come to be known for, because no words are more synonymous with Amon Amarth than unrivaled songcraft and unswerving commitment to no-bullshit heavy fucking metal – and now they have a landmark tour to match.

No Viking warrior was more revered or legendary than the fearsome Berserker – the figurehead of Amon Amarth’s latest album. Like those lone shock troops who would dive into battle and hold back entire armies, Amon Amarth’s lionhearted self-belief and ferocious command of the live stage has earned them a legion of fans the world over. Spearheading an epic lineup never before seen this side of Asgard, this is one tour that’s guaranteed to slay.

According to Norse legend, thunder is the sound of the god Thor striking his mighty hammer. This fall, that thunder will be the sound of Berserker live on the stage as we celebrate with the gods of Swedish metal. Spread the word. Valhalla awaits!

Speaking on this most epic of tours, Amon Amarth say:

“Berserkers! We will lead a Swedish metal invasion of North America this September and October along with our friends Arch Enemy, At The Gates and Grand Magus. Come fight and feast with us and earn your seat in the great golden hall. This raid is pure heavy fucking metal and not to be missed!”

“Arch Enemy is very much looking forward to invading North America together with Swedish Viking kings Amon Amarth and our Metal brothers in At The Gates and Grand Magus! Miss this Swedish Heavy Metal apocalypse at your own peril!”

“I would say that epic is the most fitting word to describe this happening. It’s an honour to be part of this gathering of metal giants and we will do our damnedest to make it a memory for life for all who will bang their heads with us during this adventure!” 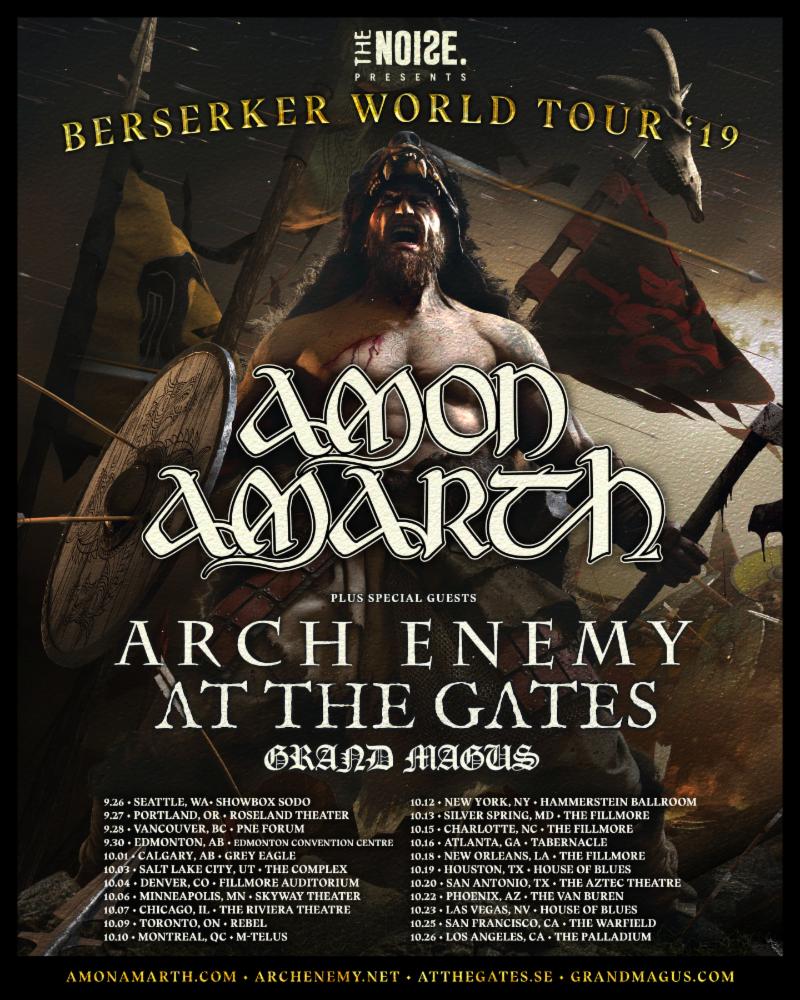 Tickets go on general sale at 10am local time on Friday 19th April from AmonAmarth.com.

A variety of limited VIP Bundles are available for the North American Berserker World Tour. These will be available from AmonAmarth.com as part of the Amon Amarth Pre Sale on Tuesday April 16th.