Today, Ryan Adams shared “Fuck The Rain” – the lead single from Big Colors, which is the first of three albums he will release in 2019.

Ryan Adams said, “Check out this song it’s cool. Or don’t- we all might die trump is president. I love you, sincerely Ryan Adams.”

Adams will embark on a UK tour which kicks off on April 2nd at London’s Royal Albert Hall.  He has partnered with CID Entertainment to offer Fan Experiences that grant access to Ryan’s Pinball Lair pre-show experience and premium seating during the show. The pre-show experience will feature a variety of pinball games, a private bar, and a specially curated Ryan Adams gallery. Ryan Adams Fan Experiences are available with the ticket pre-sale, which launched earlier today. For additional information, visit https://www.cidentertainment.com/events/ryan-adams-tour/. Tickets go on sale to the general public this Friday, January 25, at 9:00 AM. See below tour dates.

Now available for pre-order HERE, Big Colors will be released on April 19 via a partnership between Adams’ PAX-AM label and Blue Note Records. Fans who pre-order Big Colors in digital form will instantly receive “Fuck The Rain.” The album is also available for pre-order in limited edition vinyl and CD formats at Adams’ store and can be bundled with the exclusive 7” single,“Anybody Evil.” 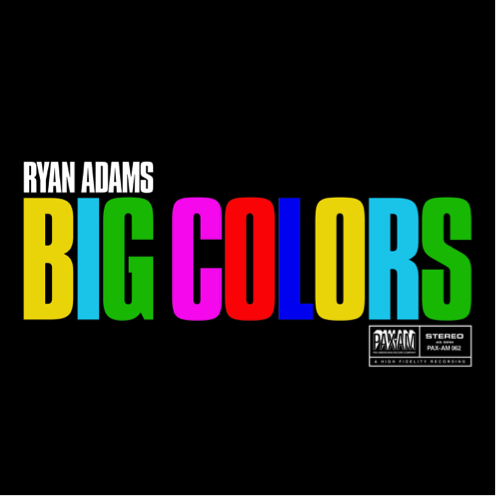 Ryan Adams, who has been hailed as “one of the most elegant singer-songwriters of his generation” by The New York Times, co-produced the album with Beatriz Artola. John Mayer,Bob Mould, Benmont Tench, Don Was and The Section Quartet are featured on Big Colors, which was recorded at Electric Lady, Capitol Studios and Adams’ own PAX-AM.

Big Colors follows Adams’ 2017 album, Prisoner, which debuted at No. 3 on in the UK album chart, his highest ever charting position in the UK. Professing his love for Manchester online around the album announce, Adams pays homage to the city that he claims shaped his life by naming a song after it. “It is at the heart of all the things I love about music, from The Smiths, Joy Division, Oasis, New Order and The Stone Roses.”
TRACK LISTING – BIG COLORS