All bands begin, get to a certain point, and then inevitably explode famously or fade away slowly. Karkaos has gone through changes and is making a comeback.

Veronica was also at the helm for the band’s first L.P., Empire, which hit shelves in March of 2014. The first video support for this album was â€œDepths of Madnessâ€ and was released in December of 2013. The band at this early stage had already been on Montrealâ€™s prestigious music television station, Musique Plus. They had also played with other bands in the Montreal scene such as Into Eternity, Enslaved, UneXpect, and Unleash the Archers.

All bands go through stages of inspiration and sometimes turmoil. After the release of Empire, the band parted ways with Veronica. Priorities of both the band and Veronica seem to be the major reason the change. After a suggestion to take a look at a local singer and a few auditions, the band came to a unanimous decision. The following announcement was made on the band’s website:

“Karkaos is very excited to announce Viky Boyer as their new lead vocalist. Viky is a well hidden gem within the Montreal metal scene and has been commonly known by many as their metal sister from another mother. Her amazing clean vocals and screams are only matched by her ability with words that will make you want to climb the highest mountain and sing your heart out. We know that she will take the stage as a monstrous beast leading us into battle but she is now also part of the family and she makes us feel right at home.”

And so the newest chapter in the Karkaos’ evolution has begun. They re-recorded their single, “Leap of Faith”, with Viky. Their first show with the new line-up will be Nov 28th, 2014 at Petit Cafe Campus with MÃ¤rchenbilder, Instanzia, and At Dawn’s Edge. Details can be found here. 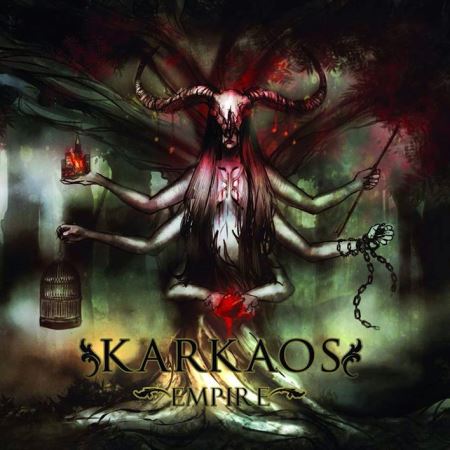 For those wondering about a Canadian/U.S. tour, Eddy Levitsky had this to say on the subject. “[We] will wait until our next album because we turned a page and we will focus on that new chapter of Karkaos.” And it doesn’t look as if that wait will be too long.

When asked if that meant there was new material or a reworking of Empire coming, the answer came quickly and with pride. There won’t be any reworked old material. Eddy gave a hint that there might be a new single with a following video from Karkaos released on the web just in time for the Christmas/New Years holiday season.