HRH, have announced the initial line-up for HRH Blues 5. A further swig from the Blues hipflask, blended from some choice artists and acts, some new, some vintage.

There’s something for every fan of the Blues and Blues/Rock in this line-up and the celebration of the genre will hit town at the O2 Academy in Sheffield, running between 13th April and 14th April, 2019.

Aynsley Lister will be headlining the event, along with another exciting, yet-to-be-announced act, who’ll be announced in the next 7 days, completing the deck. They lead a field packed with talent, chosen by the HRH community.

Aynsley Lister is a British blues-rock guitarist/singer and songwriter, known for his explosive natural talent and fiery, feeling-filled compositions. A gifted songwriter, with an impressive body of work filled with heart and soul; also a remarkable guitarist and mesmerising live performer. Music is deep-woven into Lister’s DNA and flows from his fingertips like bolts of sonic lightning. Having sold over 86,000 albums, garnered much critical acclaim, and put in years of high-profile touring, Lister’s record speaks for itself, firmly securing his position as a leading light in the resurgence of British Blues-infused music.

Other great bands announced include:

The Quireboys (Blues Set) – Pontus Snibb’s Wreck Of The Blues

Like all HRH events, HRH Blues will be a close-knit, kickass, shenanigans-rich community experience, where fans of the Blues and Blues/Rock get to meet up, quench their thirst for great live music, and party with friends old and new. Quality acts, chosen by the fans. Top notch accommodation, with hotels on the doorstep for your convenience and to keep the community buzz alive and intact. HRH Blues 2 will be a two-day event, with hotels and breakfast included, as well as entrance over the weekend.

For further info, including details of the passes and packages, check out the website at https://www.hrhblues.com. 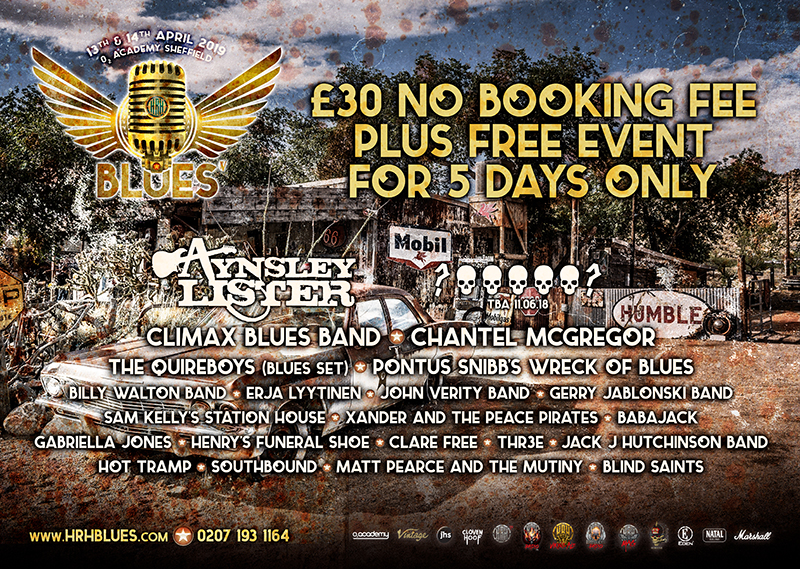