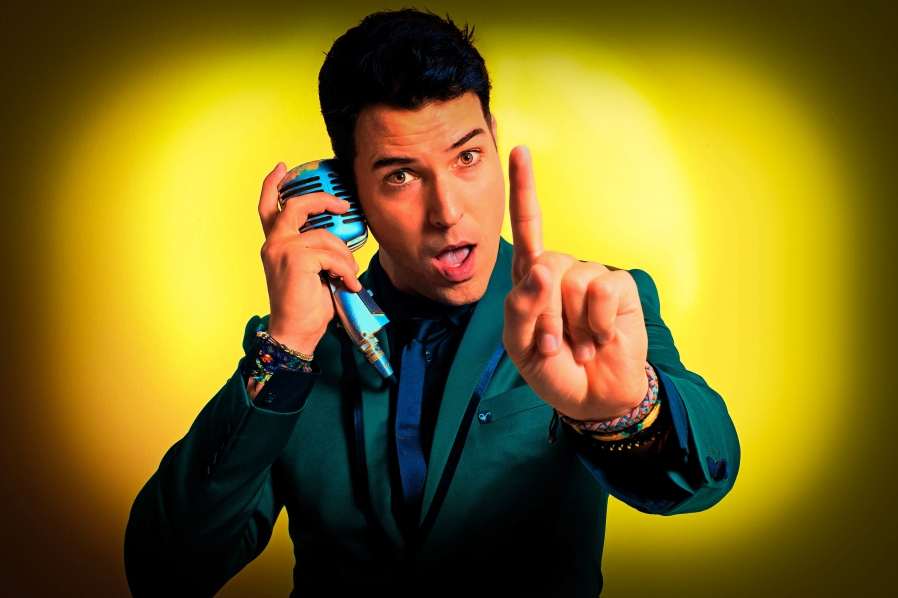 If you live in Las Vegas or are one of the many tourists that keep this city thriving, you may already know of Frankie Moreno. For everyone else hereâ€™s your chance to get acquainted.  With classic good looks and a heartwarming smile, heâ€™s got the image thing covered.  But can he play?  Ah, yes he can.

Frankiesâ€™ career boasts an impressive list of accomplishments.  Most recently these include being named 2012â€™s Las Vegas Entertainer of the Year for his long running headline show at the Stratosphere Hotel and Casino, a Billboard #1 hit covering The Beatles Eleanor Rigby with violin virtuoso Joshua Bell, and a spotlight performance of his original song Tangerine Honey on NBCâ€™s Dancing with the Stars.

But, even with a such powerful resume, Frankie is still virtually unknown outside of Las Vegas because heâ€™s never really gone out on tour as himself. This is going to change.  His show at the Stratosphere is now set up to allow time to tour.  European, as well as U.S. shows, are currently being put into place.

With a new EP in the final mixing stages and some very important, super secret, network television appearances on the horizon, it seems Frankie is finally on the cusp of what heâ€™s been working his entire career for.

I recently spoke with Frankie to get the story on where heâ€™s been, what heâ€™s doing, and what lies ahead…

Lets start with some history:

â€œI was one of those little freaks that could play piano at 3 years old.  I learned all the instruments really young. I mean I was pretty strong.  Sight reading, ear, and theory, on the piano, by about 7 or 8 years old. So, I started instantly moving into guitar, bass, and drums.  But, as I learned all the different instruments, I started getting creative and writing.â€

At 10 years old Frankie performed on Star Search and by 17 was recording his own albums on cassette at home and selling them at his shows.  When he turned 18, he moved out of Santa Cruz, Calfornia to Nashville, Tennessee and began his career as a staff writer for TV shows and working on his own sound as well.

â€œThen (when) you start writing 50â€™s or 60â€™s music, what does that become?  In the mid 90â€™s  it was country.   I wasnâ€™t really a cowboy hat, honky-tonker, but I mean the closest thing (to what I was doing) was country music . Garth Brooks had just come out and was dominating the music industry.  Country was the primary thing. I mean I was more country than I was rock.â€

And then he met Pat.  Frankie is currently working with legendary producer/engineer/musician, Pat Thrall.  Thrall has worked with everyone from Celine Dion, Rhianna, and Justin Bieber to Glenn Hughes, Meatloaf, and Pat Traverse.  He is producing, engineering, and mixing Frankieâ€™s new, yet untitled, EP, which is set to be released in March or April of this year on Frankieâ€™s own Bermuda Records.

â€œI record in my home studio.  I bring it to Pat and he does his thing.  He starts taking (the songs) and putting in a little bit more of that old Ray Charles feel.  Like if Amy Winehouse was a dude that played piano like Jerry Lee Lewis.  Weâ€™re going for that retro sound.  Like, it sounds old, but it isnâ€™t old.  What heâ€™s doing is heâ€™s taking the songs, mixing them to sound like old 1950â€™s or 60â€™s records and then remixing those to sound modern.  Really cool way of doing it.  Weâ€™re doing this five-song EP and we want this to be released just as all these television shows start hitting.â€

But, how does a child prodigy pianist whoâ€™s primarily influenced by the classical music of Beethoven and Mozart as well as the innovators of rock music such as Jerry Lee Lewis and Elvis Presley find his own sound?

He goes back to his roots.

On this newest EP Morenoâ€™s  aiming for that same sort of vibe produced by the rock and rollers of days gone by;  using his own band and recording live to achieve that looseness so prominent in the old recordings.  With Pat Thrallâ€™s help of course.  Regarding Patâ€™s producing style on this EP says Frankie, â€œI love how heâ€™s mixing it to sound vintage. Those old sounding horns.  Itâ€™s really a cool process.â€

But is it Rock-a-billy?

So now that we have history and works in progress covered, what about this amazing Stratosphere show?

â€œWeâ€™re super high energy.  Like Green Day.  If Green Day did Elvis covers.  We only do three covers and the rest is all original.  Itâ€™s edgy lyrically, but not so edgy that is turns away a certain demographic.  One of our biggest fans is Vinnie Paul (Pantera).  Vinnie Paul, DJ Ashba (Sixx:AM, Guns and Roses); those guys come to my show all the time.  We bring up all these rocker guys and they love it.  Why?  Cause it still has an edge.â€

Outside of music Frankie has a few interesting side ventures as well.  A striking line of signature suits and Swarovski Crystal embellished bottles of sparkling wine.  How did these projects come to light?

â€œI started making my own suits for stage because I needed certain things to move and to breathe better, but I wanted that cut classic 60â€™s look.  You canâ€™t just go into the store and find that.  Then a lot of the entertainers in town started asking, ‘Where are you getting that suit?’.  So we created this line called ‘Virtuoso’.  Itâ€™s on my website.  You can order them there.â€

â€œThe sparkling wine is in all the stores.  Itâ€™s called Frankie Moreno. They came to me and it was funny cause all we drank was whiskey.  But itâ€™s cool.  A cool side project.â€

All clothing and alcohol ventures aside we get back to the music. You can tell a lot about a musician by one simple question:

Hey Frankie, what are your top three concerts?  Without hesitation it goes like this: â€œBruno Mars at the MGM Grand, Paul McCartney, and Green Day on the ‘American Idiot’ tour.â€

If youâ€™d like to catch Frankie in concert, for now youâ€™ll have to book a flight to Vegas.  But, hopefully soon, he will  be visiting a venue near you. â€œItâ€™s cool being here and I like being here.  But thereâ€™s something about getting on a bus and not knowing what the stage is going to be tonight or what the crowd is going to be like tonight.â€

If you canâ€™t make it to Vegas and his tour has not yet started, look for him on a television near you.  Youâ€™ll see him.  Itâ€™s gonna be big.