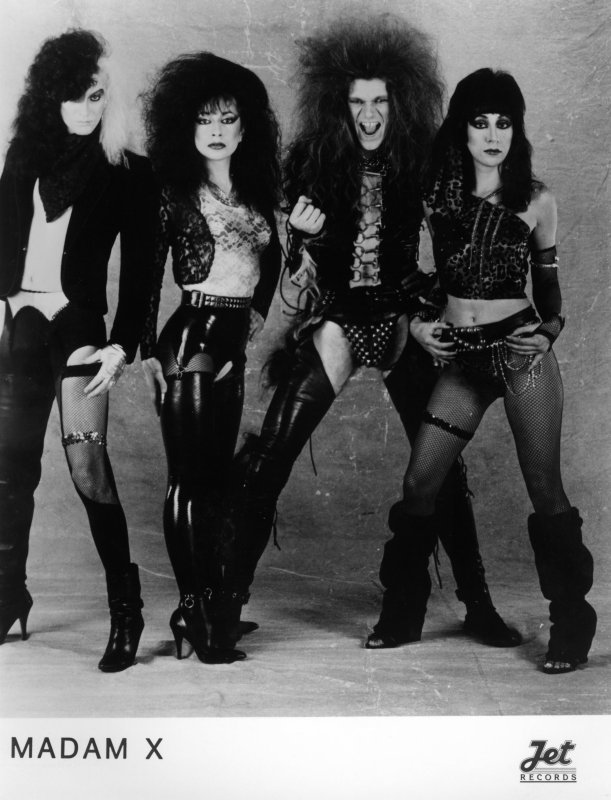 Word has spread online that Madam X is planning to release a new single, their first in decades. The new single, Another ’80s Rock Song (The Party Never Ends), was co-produced by Kevin Sharp and Greg Stryker. It was recorded at Metro 37 Studios.

Madam X originally formed in 1981 in Detroit by the Petrucci sisters. The band, like most others, experienced various lineup changes over the years. Roxy Petrucci would leave the band to join Vixen. Doliber and Kaiser also left to pursue other projects. One notable member would be a young Sebastian Bach, who played with Madam X from 1987-1988, before leaving to join Skid Row.

In 1984, Madam X released its dÃ©but album, We Reserve the Right. The album, produced by Rick Derringer, spawned the cult classic single, High in High School. The video that followed was an MTV favorite. For obvious reasons, the song resonated with the now infamous April 20th (420) observance for marijuana legalization.

The band went on hiatus from 1988 to 1991. The Petrucci sisters reformed briefly with Lenita Erickson on vocals and Irene Wohlman on bass. This incarnation of Madam X would mark its first and only time as an all female band. However, this was not to last as the band disbanded a year later.

This might have been the last we heard of Madam X, had it not been for Roxy Petrucci. According to an interview, she was performing at Firefest in England in 2013. During a meet and greet session, she noticed a lot of Madam X materials (records, pictures, etc.) coming across the table for autographs. This led her to approach her sister, Doliber, and Kaiser about reforming to release new material for the fans. This led to the invite to play Sweden Rock Festival.

Here is what others have said about Madam X:

“Madam X songs are catchier than herpes at a groupie convention.” ~ Billboard Magazine, 1984

“This song is everything I loved and miss about the â€˜80s. Very fresh in todayâ€™s scene” ~ Tony Srock, president of Full Effect Records

“Madam X has written a barnstorming anthem! A crushing sing along chorus, reminiscent of the best the â€˜80s.” ~ Gerard Talbot, Virgin Records, Astralwerks

Madam X will perform in the Detroit-area at the Diesel Concert Lounge in Chesterfield Twp on Sunday, May 4th. A VIP meet-and-greet is planned. Â Doors at 7 p.m. Admission is $10 / VIP $25. Copies of the new single will be available.