It’s been nearly 18 months since the band released their last album, Game On, and a lot has happened in that time!

The Amorettes released their previous offering in early 2015 and have since toured relentlessly supporting Thunder, Europe, Black Star Riders, and Ash to name but a few. Their hard work has earned them a large fanbase allowing the band to fund the new album through a Pledge campaign. With various offers and prices ranging from a copy of the CD to one of Gill’s guitars, they reached the 100 percent target in no time at all. By the end of the campaign, they had reached nearly 300 percent.

The result is White Hot Heat. The album is appropriately named; it’s hot! Recorded at Leeders Vale Studios, produced by Thunder’s Luke Morley, and mixed by Nick Brine (The Darkness, Bruce Springsteen), this album follows on with their no-nonsense attitude. Some have described them as a female Motorhead, and it’s easy to see why. 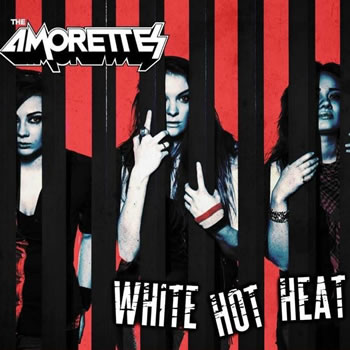 With Morley at the helm, the album is well produced. It’s ten tracks of no-thrills, ballsy rock n’ roll. Opener “Batter Up” kicks off the release full speed ahead with its punchy guitars and rumbling baseline.

“Let The Neighbours Call The Cops,” co-written with Ricky Warwick, is the first single and gives us an insight into the attitude of the band. Already getting airplay on Planet Rock, it’s a great song and should gain them more followers.

“Come And get It” has an old school 80s rock vibe to it, before “Roll” opens with Gill’s screaming hot vocal leading into a song in a hurry – one to get the heads banging for sure. The band is on fire in this one, with Hannah’s intense drum work.

Morley co-wrote three tracks on the album, including “Crusader.” The song builds upon itself starting with simple drums and simple melody. In the chorus, though, the band opens up with a big vocal punch, lots of cymbals, and lead guitar giving it the action movie soundtrack feel.

The other two are “Pervert Alert,” which has the makings of a concert anthem – catchy beat and easy-to-sing-along-to lyrics (albeit with a message), and “White Russian Roulette,” an 80s rocker full of attitude; both destined to be fan favourites.

“Eyes On The Prize” one of the heavier tracks features heavy guitar over solid bass and drums. Montgomery nails the vocals with the flair of Fast Eddie Clark.

Opening with a low, rumbling bass line, something evident throughout the song, “Man Meat” is a steady rocker built on great guitar licks over rocking rhythm – a grower of a song.

White Hot Heat is a great rocking album from start to finish. Certainly no fillers here. If there is a complaint it’s that it’s too short – another couple of tracks would have gone in nicely!

Catch the band at festivals throughout the summer, and look out for tour dates soon. Check the website for details.

The album drops on June 27 on Off Yer Rocka Recordings. It will be available on the band’s website or through Amazon and iTunes.

“Let The Neighbours Call The Cops” by The Amorettes: