Ruf Records latest signing Jeremiah Johnson gets ready to release his brand new album and label debut in the shape of Straitjacket.

It’s been two years since the release of Jeremiah’s critically acclaimed last record Blues Heart Attack and so much has happened for Midwest-based bluesman in that time. 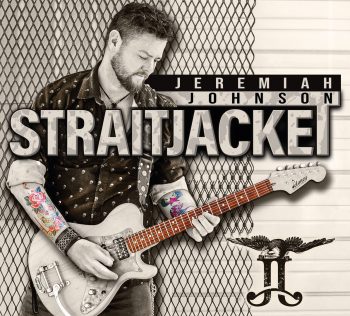 Hailing from the River City of St Louis, Missouri, Jeremiah Johnson has built up somewhat of a following in his home state during his two-decade rise. Following his recent signing to Ruf Records Johnson has broken out of the domestic market, which resulted in his first European show this summer. It just goes to show that hard work pays off in the end.

For this record, the US-based artist has teamed up with Ruf label mate/producer and fellow St Louisan Mike Zito. Collectively the pair has delivered an album that traverses the full spectrum of the blues/rock arena.

The opening/title track itself immediately grabs the listener’s attention and sets the tone for the rest of the record. “Straitjacket” is an upbeat old-school blues number with a splash of soul.

Johnson showcases his funky side with the groove-heavy “Getting Tired”, before “Blues In Her Eyes” brings down the pace momentarily with a beautiful slow blues number.

Foot stomping, upbeat numbers like “Keep On Sailing” make you want to get up and dance. Much in the same vein, Jeremiah puts his own unique stamp on the Ten Years After classic “Rock & Roll Music To The World”. Having featured on rhythm guitar throughout the record Mike Zito himself picks up lead duties during the latter, whilst simultaneously channelling the late great Alvin Lee.

Having firmly established itself as a live favourite over the years as well as being the title track to one of Jeremiah’s earlier solo records, “9th and Russell” takes centre stage once again on Straitjacket. With this track, in particular, you can’t help but be swept away with its incredibly infectious groove.

The instrumental number “Bonneville Shuffle” has a sound which would work well on a movie soundtrack. The track features prominent sax licks, over a hard-hitting rhythm from Tom Maloney (bass) and Benet Schaeffer (drums) along with searing guitar licks from Johnson. Frank Bauer’s saxophone playing adds a soulful dynamic to the record which pairs seamlessly with Johnson’s blistering fretwork throughout.

One track which stands out as being a bit different on Straitjacket is “Hold My Hand”. This beautiful and heartfelt love song is performed entirely on acoustic guitar, adding a tender touch towards the end of the album, to great effect.

With Jeremiah Johnson’s latest offering he delivers an album which is straight up, honest American blues rock music. Jeremiah’s writing is passionate and from the heart.

Jeremiah Johnson’s recent signing to Ruf Records marks a new era for St Louis based bluesman which will put him in a prime spot on the international stage, a position which he so duly deserves.

Straitjacket by Jeremiah Johnson will be released via Ruf Records on 24th August.