Even after all these years, the bands, the fads, and the many reinventions of â€˜rock music,â€™ Ace Frehley is the reason I swing an axe. The Les Paul, a simple approach to a pop hook that somehow managed to sound almost new wave, while at the same time having all the weight of what would become the Zeppelin/Sabbath wing of Heavy Metal, made Frehley a dreamerâ€™s guitar player. Where his former band mates thrived in forced sexuality, Frehley thrived in stargazing and let it happen naturally.

Frehley remains a different sort of guitar player for his generation. He seamlessly blends golden age Rock â€™n Roll influence with the bombast that came with the discovery of Overdrive, but with just a dash of the ethereal. Frehley has the sort of pop sensibility that places his work in a higher category of craftsmanship than his fellow KISS originals. He does not need Paul and Gene to make it happen.

Frehley knows what works and what does not on his few but well-crafted, American rock records. They are often subtle. The signature echo still gives me goosebumps (recall â€œI’m snowblind, I think I’m lost in space… ace… ace… ace…â€) This works as a handy device on the Space Invader album as well.

Frehleyâ€™s music swings, you can dance to it and air guitar to it. Itâ€™s pop music in the truest sense. Frehley lays bare his preference for a great pop hook. Hell, he once bravely covered ELOâ€™s, â€œDo Yaâ€ which, as a too-cool-for-school 15-year-old discovering punk and heavier forms of metal, made appreciation for such combinations accessible. . But I always liked ELO and I didnâ€™t care what Henry Rollins thought and neither did Frehley. Thatâ€™s what is important about Frehleyâ€™s work, it is completely devoid of pretense, and itâ€™s, well, fun. The manâ€™s appreciation for the pop hook, like my own, is unabashed. A wonderful thing to see after all these years, that my first guitar god always had, and retains still, his joy.

Space Invader is the latest release since 2009â€™s Anomaly, and is his third studio album in 25 years. Hard rock is a young manâ€™s game in a pop culture climate that considers age 40 to be older than dirt. It is often a challenge to listen to rock music made by people considered to be past their prime. Admittedly, Iâ€™ve grown used to chasing the newer things around town and the net in order to feel relevant, but in the post-FM radio consumer culture, one may begin to crave something that feels like home. For this kid, Frehleyâ€™s music certainly does.

The idea of swing in a pop/rock song is a subtle thing, and not easily attained without sticking to something as simple as a certain strum likely acquired in the writing process. I imagine that the swing can get lost in production, though there is a well-intentioned effort to maintain it. Just like his undeterred sense of joy, Frehley maintains the swing throughout.

In Space Invader, the classic Frehley space echo and vocal cadences that made the 1978 solo record a surprise hit are alive and heard throughout the collection.

In Gimme a Feelinâ€™, the lyrics; â€œAll night long, I canâ€™t sleep â€˜cuz Iâ€™m thinkinâ€™ bout youâ€ (right?) would be mock-worthy if uttered by anyone else, but this is Frehleyâ€™s Wheelhouse, which is why he has managed to remain an icon. His affection is wrapped in innocence that drips with sincerity.

I Wanna Hold You, Toys, Reckless, and Immortal Pleasures are crowd pleasing riff rockers, the latter being a touch more uncharacteristically acoustic in nature.

On Change, we find a more serious and reflective Frehley, who gives advice rock lyrics with urgency. To â€œpick yourself up and changeâ€ is not often an easy task, but clearly, it is possible, as Frehley is seven years sober. Personally, I like it when Ace keeps it lighter, but the introspection is forgivable.

On Inside the Vortex, there is a healthy mixture of urgency and fun riffing. The lyrics, production mixes, and the astronomical imagery we have come to associate with Frehley is in high supply. This tune seems also to be reflective of a more serious Frehley who clearly has considered the concept of time and the precious nature of it. This is a riffy song that is classic Frehley fun.

In What Every Girl Wants, the same knowledge of precious time has been directed outward to his female fans, which he promises will get what they want from him. There is no need to overcomplicate this; â€œIâ€™ll give you what every girl wants x3, Iâ€™ll give you much more than a walk in the park.â€ Itâ€™s nice to leave things to the imagination sometimes.

The serenading continues into Past the Milky Way, only here Ace has directed his affection toward Rachael, and heâ€™s a better man for it. Though Frehley has a world of fans of many ages, his first and most loyal fan base are men who as boys championed their Star Wars figure collection, their original KISS vinyl collection, and now champion their wives and their own children.

Those guys donâ€™t mind the occasional rock tune to express their love for their betrothed, especially when the content is mixed with the standard Space Imagery, which once again is utilized here, after all we are Star Wars, and Frehely, fans. These may not be the blasting metal songs we strived for as younger men, but for Frehley to have a gal he loves enough to dedicate a tune to is, well, mortal, just like us.

As for The Joker (yes, the Steve Miller Band hit), nobody doubts Frehleyâ€™s ability to pick out a worthy tune to cover, but perhaps itâ€™s my mild disdain for this perfectly good tune at this point in my life that makes me indifferent to this song. No doubt, Frehley is a fellow â€œspace cowboyâ€, which explains a lot, and he certainly makes it his own.

Starship is the final tune of this album. Itâ€™s awesome. Itâ€™s catchy. Itâ€™s a jangly seven-minute instrumental piece that reminds the listener Frehley is a light-hearted fellow who probably likes new wave and post-modern rock, rare in a musician of his generation. The song seems to frame Frehleyâ€™s guitar styling in an almost documentary fashion. Can an instrumental ever be a single these days? Probably not, but this one could. Itâ€™s a fun closer, the only vocal is a whimsical reference to George Jetson at the end of the track, accompanied by the signature Ace Frehley cackle.

Ace Frehley knows who his fans are, knows how to keep it simple and pithy, and that we do still enjoy being in his cartoonishly interstellar world from time to time because itâ€™s still just plain fun.

Space Invader by Ace Frehley is available for pre-order from Amazon: 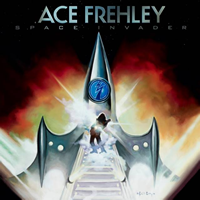