Titans of thrash Slayer have no remorse on Repentless. The album demonstrates why they are the most influential metal band of all time.

Fans of Slayer know the visceral impact of their music. It allows for catharsis with riffs that exude aggression. In their music, the listener is fearless.

With the passing of Jeff Hanneman and the less than amicable departure of Dave Lombardo, there may have been concern that Slayer would fade into history or worse become a shell of their former greatness. With the release of Repentless, Slayer has no regrets. This album burns with hostility and captures the essence of classic Slayer brutality.

Joining Tom Araya (bass) and Kerry King (guitar) are Gary Holt (guitar) and Paul Bostaph (drums). Most readers know Gary through his exemplary guitar work with Exodus and Paul Bostaph as the former drummer for the most underrated metal band of all time, Forbidden. Together, these men have crafted an album that is among the best that Slayer has produced. 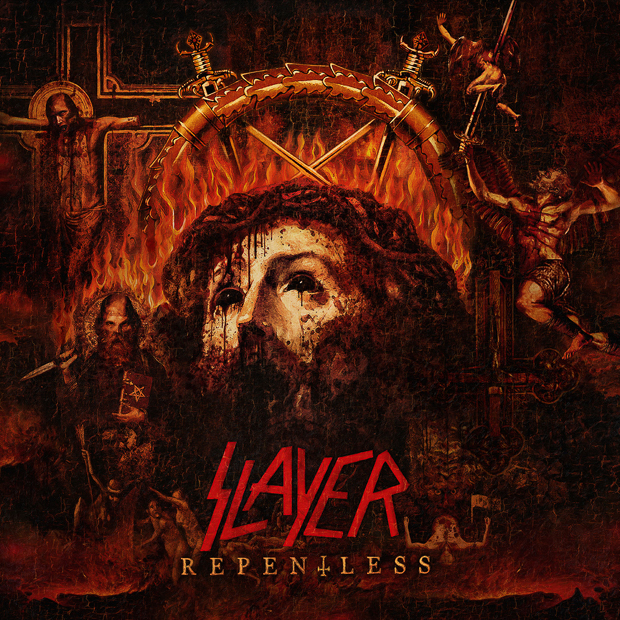 The opening salvo from Repentless is “Delusions of Saviour” with trademark Slayer minor progression and tension building major fifths pounded out with a marching cadence. This intro then unloads into “Repentless.” The title track sets the tone for the album with furious guitar riffs, popping snare encased in blistering tom rolls and double bass, and Araya’s screaming vocals. This is a fantastic ode and tribute to the Jeff Hanneman era.

The unrelenting Slayer-gasmic assault continues with the breakneck riffs of “Take Control.” You can hear a bit of Gary Holt’s influence on “Vices.” The leads by Holt and Kerry compliment each other well and the bridge riff has a nice heavy groove.

While most of Repentless is filled with ferocious music and patented Slayer anger, there are a couple of standout songs. No one crafts better tunes about the warped psychosis of a serial killer than Slayer. “When The Stillness Comes” is magnificent in its horrific portrayal of the murderer’s viewpoint. “Piano Wire” grips you with its grinding dissonance. The riffs are filled with menace.

Paul Bostaph is awe inspiring on “Atrocity Vendor.” The song rests on the frantic and chaotic pace created by his drum lines. Storming bass accented with flying crash cymbals and ridiculously fast tom rolls define the intensity of this song.

The album closes out with injury inducing speed of “You Against You” followed by the mid-paced thunder of “Pride In Prejudice” with Slayer’s take on the idiocy of racial prejudice festering within our society. You can feel the disgust in Tom Araya’s vocals as he spits “Some love to hate. Right in your face. Violence will facilitate.”

Repentless hails the rebirth of Slayer in vicious glory. The power lies in music which allows the listener to escape and release the turmoil of life. A Slaytanic hail to the band for a damn fine album.