With their new rhythm section intact, Baroness return with the next installment in their â€˜colorâ€™ series, Purple, this time self-released on their own Abraxan Hymns label.

Georgian metalers Baroness triumphantly returns with their first new music in over three years. They have titled this one Purple, following in the same tradition of naming their albums after colors. This is their fourth full-length album, following the Red Album (2007), the Blue Record (2009) and their Yellow & Green double package (2011).

The band traveled to Cassadaga, New York to record Purple with Dave Fridmann at Tarbox Road Studios and Baroness says it is the most fully realized representation of their intention as a band. Considering the amount of physical and mental energy spent writing it, they are thrilled to have accomplished something which would have seemed impossible a couple of years ago.

Right from the get-go, Baroness jumps up and detonates with fat, thick progressive sounding sludge metal on the album opener â€œMorningstar.â€ A mixture of complicated drum polyrhythms and the beefiest guitar tone youâ€™ve ever heard, this is music that can be used both to entertain and to clear large areas of vegetation with sonic destruction. The vocalist has raised his pitch on this tune, as I am more used to a lower, ‘growlier’ voice from him, but heâ€™s just as powerful as ever. I was captivated by the guitar harmonies during the choruses and the post-chorus melody, and the guitarists, seemingly knowing exactly what I love to hear, launched into an uplifting major-chord progression for a few measures making this an instant classic!

â€œShock Meâ€ is a pulsating rock tune with some really pleasing vocal harmonies throughout. I found the overcomplicated drum rhythm in the beginning of the song to be a slight distraction however soon overlooked it. I love the harmonies on the chorus, and the band, despite bringing a livelier sort of vocal melody and harmony, continued their distinct wall of thick sound. And what a bridge! I love the fuzzy distortion on the guitars. â€œShock Meâ€ has been included at number 23 on Rock Soundâ€™s top 50 releases of 2015 list.

â€œTry to Disappearâ€ goes from a rather plain opening to another huge, fat and soaring chorus melody, definitely hitting their mark on this track. After the first chorus when the verse comes back in, itâ€™s twice as fat and has a gorgeous pitch-shifted guitar glistening behind, giving the song a musical flare that is rarely found in such huge sludge. Seemingly in direct contradiction to, and yet the perfect complement of, the sludge type genre, the ultra-melodious accompaniments and breadcrumbs this band peppers their music with raises it to another level above the rest.

â€œKeroseneâ€ has a speedy intro to it reminiscent of â€œIsaacâ€ off of the Red Album. It starts with high energy while maintaining it throughout. I wasnâ€™t as captivated with the melody here as I was in the first three tracks, but nevertheless enjoyed the songâ€™s changes and evolutions, especially the prechorus with the acoustic guitar. The melody shift in the second movement of the prechorus was especially enjoyable. Once the chorus finally kicked in, my excitement for the song dwindled just a bit. After that hugely enjoyable chorus, going back to that verse was somewhat disappointing as I hoped the band wouldâ€™ve thrown in a new twist onto the melody as they so often do, but it was the same old thing until that gorgeous prechorus kicked back in again. That bass fuzz on the choruses really gives the song weight and the song outro gave me chills with the epic hits and cascading drum rolls.

â€œFugueâ€ has a haunting opening with beefy but subtle keyboards and a rim shot drum accompaniment. Decidedly smooth, yet sleazy, I found myself grinning and nodding along with the slow tempo. Then, in come the guitars for some harmonious crying and weeping, and I couldnâ€™t help but close my eyes and get carried along the melancholy riverâ€™s wave. This instrumental is beautiful and â€˜shiveringlyâ€™ creepy, however much too short.

â€œChlorine & Wineâ€ was the first single released off the album. I love the Queen sounding guitar effect during the prechorus, and once again we have a thick sludge song with higher-register vocals and more-musical-than-expected guitar accompaniment.

â€œThe Iron Bellâ€ is another up-tempo kind of song that chugs along determinedly. An average tune with good multiple rhythm, tempo and melody changes during the chorus while sounding unique and interesting with that signature Baroness girth.

â€œDesperation Burnsâ€ is easily the standout track on the album. It has everything I love about Baroness: thick but musical guitars with harmony accompaniment, complicated yet soaring riffs, and meaty vocals with just a hint of gravel. This is a song worth listening to, over and over, then over again, before continuing on to the next track!

â€œIf I Have to Wake Up (Would You Stop the Rain?)â€ is a slower tempo tune with soaring vocals and a really groovy dirty bass beneath. The song has a sort of old-west movie feel to it during the verses, and then the chorus gets higher in pitch and chord progression. I like how it kept returning to that major chord at odd times during the melody, which gave it a very sweeping sort of feel.

The album ends with â€œCrossroads of Infinityâ€ which isnâ€™t really a song at all, but a creepy distorted voice.

A tragic bus crash accident in 2012 followed by the departure of the bandâ€™s drummer and bassist left some fans wondering if the band would continue on. Luckily for us, vocalist/rhythm guitarist John Baizley and lead guitarist Peter Adams found bassist Nick Jost and drummer Sebastian Thomson. And, Iâ€™m glad they did as Baroness have crafted a progressive sounding sludge influenced metal album full of intense, heavy and sonically captivating songs which fans will love the world over. The Red Album has been revered by fans and critics alike as the band’s crowning achievement. That is, until now. Purple is a masterpiece that far surpasses any of their previous albums, while Baroness continue to evolve putting them light years ahead of their contemporaries. 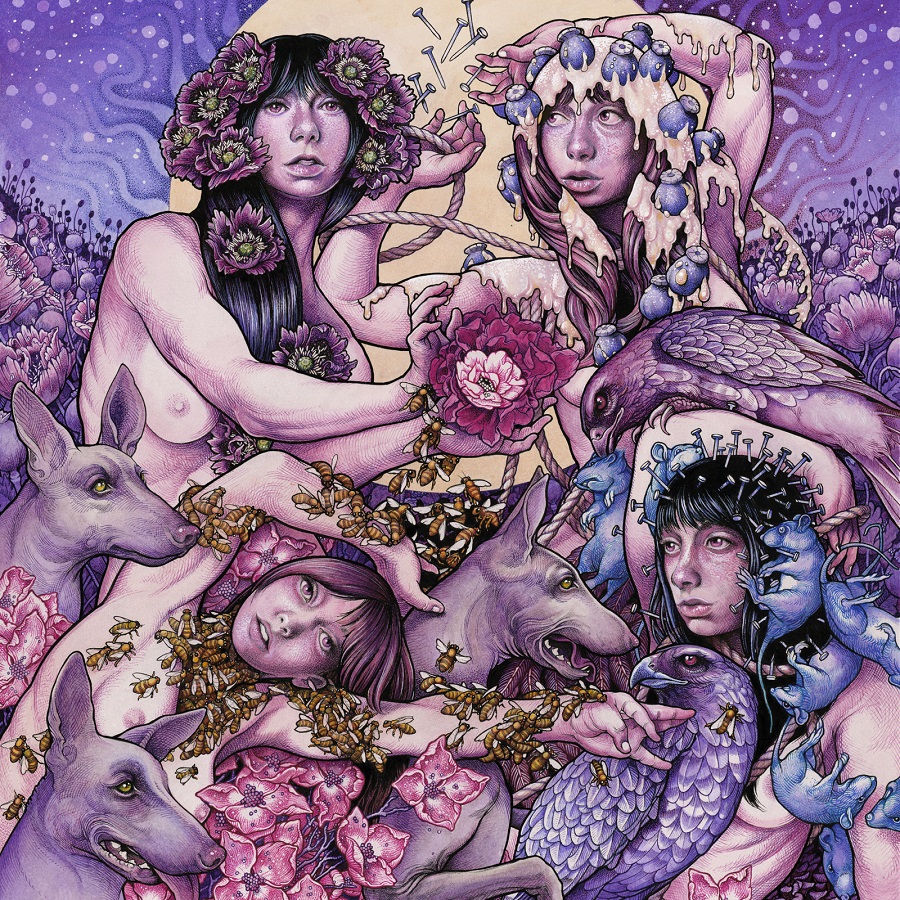