Ministry to release Last Tangle in Paris CD/DVD set (July 4 EUR, July 7 UK, July 8 US), the DVD gives light to the life and unfortunate but humble disband of Ministry.

Last Tangle In Paris CD/DVD is the live tour from Ministry in 2012. The DVD documented the DeFiBrilLaTouR with behind the scenes footage including, backstage and live footage, in-studio rehearsals, and the daily life of the band. As a longtime Ministry fan, I was eager to watch the DVD having never seen Ministry in concert. While I wish I had the chance to do so now, I must say this DVD is the next best thing.

One thing notable of the Ministry live performance is the immersive fan experience. In addition to the band on stage and the audio assault, the stage show includes an impressive visual display with the light show and large video screen behind the band adding to the effects. The concert begins with a video of Al Jourgensen high above a dark stage talking about the likes of Morrison, Hendirx, Joplin, Cobain not having to deal with the, “douche bags because they are already dead… BUT I’M NOT DEAD YET!” Suddenly the stage lights up awash in red light and the band begins playing Ghouldiggers right on queue.

A Ministry live performance is visually impressive. The video screen behind the stage is filled with synchronized imagery, reminiscent of a performance DJ such as Skrillex. Jourgensen’s powerful vocals dominate their sound, he has no problem nailing them live. One thing I enjoyed most was watching the close ups of guitarist Mike Scaccia’s fret work on his Gibson Explorer. His talent as a speed metal guitarist is obvious as his fingers fly effortlessly across the strings.

The main set list (below) focused mostly on material from the last ten years. The set list reprises a good selection of material across their career 2004 through 2012. For their encore, they dove back to the Paul Barker days with three tracks from 1992’s Psalm 69 (Psalm 69, NWO, Just One Fix) and Theives from The Mind Is a Terrible Thing to Taste (1990). However, It would have been nice to hear something such as Stigmata or Flashback off of The Land of Rape and Honey, the album that set Ministry on the industrial path and was a major influence on the industrial metal genre.

Something I found interesting about Ministry on stage, there didn’t appear to be any particular star of the show. While Jourgensen as lead vocalist certainly drew more attention than others, he didn’t hog the spot light, nor did anyone else. The key element of a Ministry is Ministry, the whole band. The production quality of the concert DVD was excellent. The details and nuances, the material covered. It is a great way to experience Ministry, whether you are a long time fan, or new to the band.

Al Jourgensen talks about how he met Mike Scaccia when seeing his band, Rigor Mortis, play at a local club. The two worked out the concept of combining industrial club music and speed metal. Thus, a genre is born. Jourgensen refers to Scaccia as being, “like his little brother.” There is a brief clip of Jourgensen describing him and Scaccia as “brothers of different mothers.” The relationship has been a fruitful as Scaccia has been a part of Ministry since joining for the 1989 tour and making his first writing and recording contribution to Psalm 69. Scaccia tells the story about the time Jourgensen has to kick Keith Richards and Ron Wood of The Rolling Stones out of his house. Amusing story… you will have to get the DVD for the details.

Sin Quirin talks about how quickly he was accepted into the band when joining in 2007. Al Jourgensen comments on Buck Owens losing Don Rich in a motorcycle accident and the down-spiral his career took following his loss. He relates this to his relationship with Mike Scaccia, which is ironic given that Scaccia died the later that year leading Jourgensen to disband Ministry.

The DVD wraps up with video of Mike Scaccia jamming in the studio, playing the solo to Jesus Built My Hotrod. It closes with engineer Sammy D’Ambruoso recounting the last thing Scaccia recorded was Side Fx Include Mikey’s Middle Finger, though it was not something beautiful and profound, but a rather harsh, raunchy, and obnoxious piece of guitar work. As it should be. Queue credits and role music… Mikey’s Middle Finger, awesome DVD.

Jourgensen has been quoted as saying of Scaccia, “there’s no Ministry without him.” I hope that isn’t true, but I understand. Rest in Peace, Mike Scaccia. You will be missed. 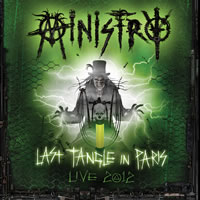