Prior to the release of the record, Bonamassa set off on a special all-acoustic tour featuring an all-star ensemble of world-class musicians, the pinnacle of which was a two-night stint at the much celebrated Carnegie Hall in New York.

This new concert live album and DVD package carries on with Bonamassa’s expansive series of live recordings from some of the grandest concert halls in the world. As a native New Yorker, Joe Bonamassa’s childhood dream was to perform at Carnegie Hall and the realisation of that milestone achievement was captured in full on the 21st and 22nd January 2016. 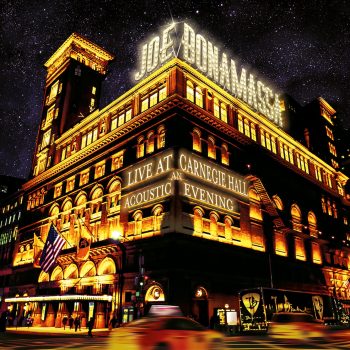 The album draws upon Joe’s whole career although it centres around Blues of Desperation, with tracks like the atmospheric “Drive”, “Livin’ Easy” and “This Train” with its up tempo rolling rhythm all featuring. Particularly in the case of the latter Joe has acoustically reworked this number and still managed to make it rock very hard.

There is still plenty of room for old favourites including a beautiful rendition of “Mountain Time”, the Celtic inspired slide fueled “Black Lung Heartache” and a foot stomping version of fan favourite “Dust Bowl”, which sounds sonically huge.

Bonamassa’s sublime performance of “Woke Up Dreaming” truly highlights his masterful playing, skill, speedy fret work and just why he is regarded as one of the greatest guitarists of his generation.

Throughout the record, each track is beautifully arranged, with Joe breathing a new lease of life to these songs, which are performed as you’ve never heard them before.

The addition of acclaimed Chinese cellist and erhuist Tina Guo, the legendary Reese Wynans on piano, Hossam Ramzy the Egyptian percussionist and composer, and a soulful troupe of backing singers (Mahalia Barnes, Juanita Tippins, and Gary Pinto) add depth, texture as well as bringing harmony to these timeless Bonamassa classics.

Joe Bonamassa continues to push the boundaries of blues music to keep things fresh for both himself and the listener. This particular recording highlights the versatility of Joe’s playing with a dominant acoustic performance and one of his most adventurous outings to date.

We look forward to more of what is to come from Joe Bonamassa with both the impending release of Black Country Communion IV and his extensive UK tour in 2018.

Tickets for Joe Bonamassa’s forthcoming UK tour are on sale now via a 24 hour ticket hotline on 0844 844 0444 as well as both www.ticketmaster.co.uk and www.jbonamassa.com/tour-dates.