Sometimes, we’ll go back and look at our pile of mail, here at the National Rock Review compound. Boy did we miss this one.

We’re normally better than this on reviews. We whiffed on It’s Time To Get Weird since our talking to Michael not all that long ago. It was released Oct 30, 2015, on Bloody Bat Records. For those that don’t remember, the guys from Long Beach, CA are Michael Del Pizzo (vocals), Jaboo (guitar), Jamie Teissere (guitar), Leighton “Lats” Kearns (bass), Jimmy Schultz (drums). The band is about to be very busy going out on the road with the likes of â€ªAvatarâ€¬, â€ªWilsonâ€¬, â€ªHellyeah, â€ªEscape The Fateâ€¬, â€ªIn This Moment, â€ªShamans Harvestâ€¬, and Nonpoint. 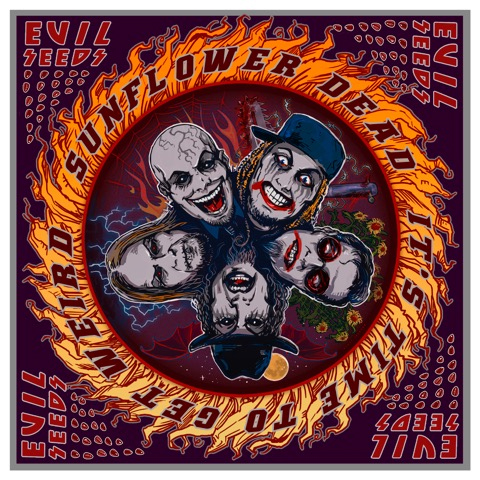 Track Listing for It’s Time To Get Weird

Even though this is only their sophomore effort, it is a fantastic release from start to finish. It has all the elements you want on a CD you’ll play on repeat for hours on end. The only drawback is waiting the first time for it to repeat before the ghosts scare you into staying awake for a few more minutes there at the end.

There is quite a range of styles on this record. Track six is “Nothing.” It is the soul of a power ballad in the Sunflower Dead face paint. It showcases Michael’s voice highlighting its purity without screaming, and without effects.

“Dance With Death” has a very Mushroomhead/Slipknot feel to it but with the evil seeds spin to it. The guitar work between Jaboo and Jamie on this song, and all of the album really, is smooth like a bottle of The Classic Cask Rare Scotch Whisky Single Batch 40. And much like the need of something to put the taste buds over the edge into ecstasy, Lats adds just enough of that funky-ness of his bass play to the batch that won’t disappoint your musical palate.

Jimmy does a wonderful job of his duties on “The Rain.” He allows the guys to play together in time and with a purpose. His strike patterns aren’t simply, but his delivery of them makes it seem so if you’re not focused singly on them. That bobbing of your head to the song is all his work. No one bleeds over anyone else instrumentally and his ability shouldn’t be overlooked by all of the talent in front of him on stage.

If you haven’t grabbed this album, take a listen to the video above. If you dig the single, go get the album and don’t be a cheapskate. Spend a few duckets and let the guys know you dig the music. Follow the links below to get the digital copy. Then head over to our Facebook or Twitter and let us know what you thought about it.