The road to stardom in rock can be fast, hard, and seldom enjoyed for any long duration of time. Randy Rhoads is a perfect example.

The description from the record label about Randy Rhoads sums up things pretty handily. “A lover of classical music, Rhoads had taken initial steps into rock nâ€™ roll as a 16-year-old when he formed a band, that soon became Quiet Riot. Rhoads was vaulted to the limelight in 1979 when Ozzy Osbourne chose the relatively unknown guitarist to help shape a new future for him via his band, Blizzard of Oz. The result saw Rhoads co-script two of the most famous albums in hard rock history, Blizzard Of Oz and Diary of A Madman, and rapidly ascended the stairway of fame and recognition for his virtuoso playing and writing. Famed for the way he fused classical flavors with technically-excellent hard rock, Rhoads became one of the most influential lead guitarists in rock.”

For those that don’t know or might have forgotten, Rhoads died in Mar 19, 1982 in a plane accident. Rhoads was only 25 years old. This release hit shelves in the US on Mar 03, 2015 on the UDR Music label. The album was produced and compiled by the Grammy-award winning guitarist and producer Bob Kulick at his own studio. The compilation is also available in double vinyl gatefold and digital formats. 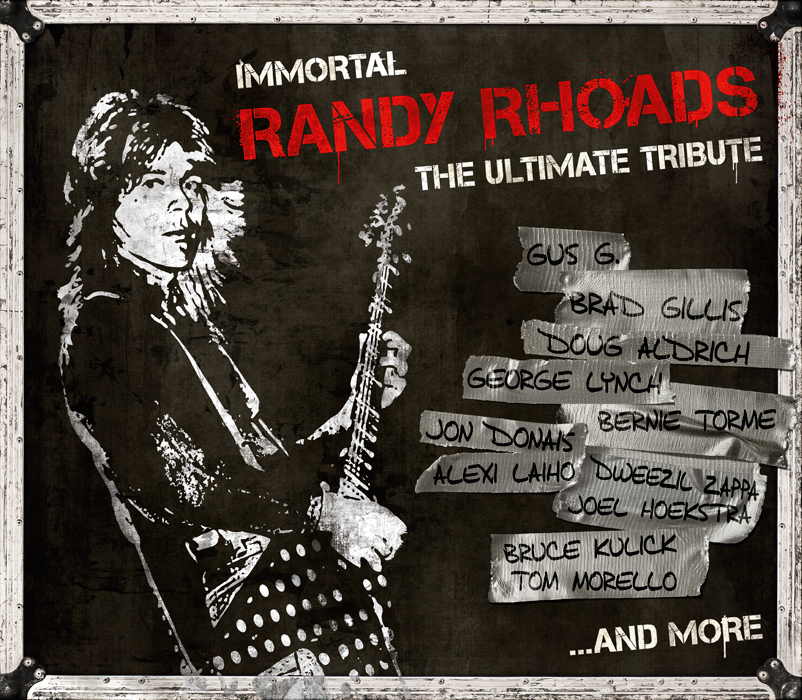 “Back To The Coast” features Randy’s brother on vocals who runs Musonia School of Music, a teaching school in North Hollywood, CA, set up by Randyâ€™s mother. “Crazy Train” gives us Serj’s take on the Ozzy favorite. And, George Lynch shows us he may be the busiest man in music by grabbing the lead duties on “I Don’t Know.” Overall, this CD and DVD set wasn’t meant to redefine who or what Randy was. It gives a tip of the hat to both his writing and his playing. Old school Ozzy or Quiet Riot fans expecting this to be better then the originals will be disappointed. While some may think it’s a gloried attempt to honor the man with a cover band and adding a few big names to sell the record, the fact that Rhoads left such an impact on guitar players and music lovers even today is remarkable.

If you’re a fan of Randy, then get a copy of the album. If you’re a fan of the classic tracks and have the originals, there won’t be any new or or unreleased cuts. For you, the DVD may be the better of the two discs that come in this package. Either way, if you pick it up, we’d love to hear what you think of the compilation.