Stryper is back with their most controversial, heaviest, and most positive album that they have ever made.

After decades of making amazing music with a positive message, Stryper are back with their brand new album God Damn Evil, which is arguably one of the band’s heaviest albums to date. Stryper manage to change their sound every album with the listener still being able to identify the elements of the band that they love. It’s a modern twist on 80s hair metal that could reach and grab anyone.

“Take It To the Cross” is the very first song on the album and it sets the overall tone of this quite heavy album. The intro is a little lengthy, but necessary as the build-up allows the listener to get situated for what God Damn Evil is going to deliver. The song even has a special appearance from a member of Act of Defiance and Shadows Fall, Matt Buchand, to take on the growls in the song, which is a little bit different to be included into their sound. This is why Stryper remain relevant because they continue to throw curve balls and change things up to gain new fans and to keep the longtime fans happy.

The music isn’t the only amazing thing about God Damn Evil. Despite its controversial title and album art, judging a book by its cover is not recommended for this album, as the message on the inside is all about beauty, love, hate, and everything that we humans go through. Stryper have always managed to deliver a positive message and the new album continues on with this trend. Songs like “Sorry” and “Beautiful” focus on things like forgiveness and always loving yourself despite what people think or believe. The title track of the album God Damn Evil focuses on removing all the evil and what is bad in the world and making a place where we could all live as one. It’s a brutally honest song that talks about how bad the world has become and that the human race could look to a higher light or power and work together to get rid of the evil in this world. 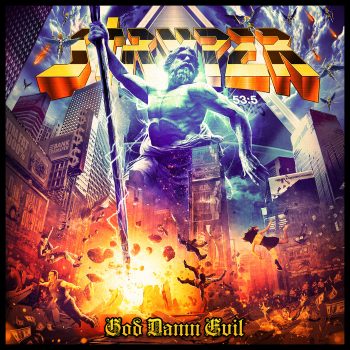 Musically, this album is everything a hair metal or modern day metal head could wish for. From the first track to the last track, the writing is amazing and the listener could tell the guys took major time in writing the record. Everything on this album compliments one another. Michael Sweet’s vocals harmonize with the bass, guitar, and drums finely like a puzzle piece. All the elements in this album are evidence that these guys have a 30+ year career and continue to show why they are veterans in the industry.

God Damn Evil is an instant classic in every way from start to finish. The lyrical writing is amazing, the songs are perfectly written and are shown by what all their fans and new fans will hear. They will hear that Stryper works hard and are definitely perfectionists in every sense of the word. The message of the entire album is uplifting and the music could pump anyone up. Stryper have made it clear that they are here to stay and do not plan on slowing down anytime soon.