You always find the best things buried, like a diamond in the rough per se. Emissary Echo is just that, a rising band from Bismarck, North Dakota. Their musical foundation is concrete and they have the potential to grow and solidify their music. Their debut album Erasing The Negatives is set to release January 10 on Amazon and iTunes.

Unfortunately, five days before their album release, the band posted to their Facebook page vocalist Korey Lee had left the band.

â€œThis past Monday January 5th we received the phone call all bands do not want to have to face. We learned that due to reasons beyond his or our control our singer Korey Lee made the decision to leave the group. As you can imagine this could not have come at a worse time for us. We are committed to still playing the next three CD release shows and our bassist Mark has stepped forward to perform vocal duties so they can still go forward as plannedâ€¦â€

However, they are seeking a new vocalist and can be contacted through their Facebook page and Emissaryecho@gmail.com. While itâ€™s not the ideal way to launch a record, Emissary Echo continues on with Preston McKay (rhythm guitar), Justin â€œSteenâ€ Kraft (lead guitar), Mark Kuntz (bass), and Cory Zimmer (drums).

Their album Erasing the Negatives was recorded in their personal studio and was mixed by Sam Hughes (Buried as Thieves). The title speaks for itself, about battling your inner demons and erasing the negatives within and around you.

The reason this album speaks and reciprocates so well is the sound. The simple melodies takes the listener through an emotional experience. Reminiscent of the early albums from Trapt and Adema, Erasing the Negatives is bringing back the feel from the early days of real alternative rock. 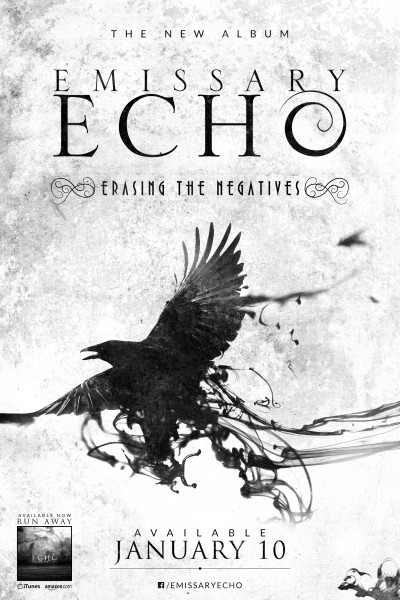 â€œPushed Downâ€ opens the record at full force. The chorus is beautifully catchy and will sound great live. The break is hammered down on guitar, bass, and drums, and then eases off into verse two. Overall, a good opening track.

â€œRun Awayâ€ is their first single off the record, radio friendly and catchy, the rhythm from drummer Cory Zimmer keeps the track progressing. The beginning has a syncopated tempo, it catches you off guard but then brings to a recognizable tempo there after. One thing about this track is how clearly you can hear each contribution from the musicians, important and yet unique.

â€œInfectedâ€ is darker, but also fun at the same time. After the upbeat opening, the first verse brings the tempo to almost a complete stance. The bridge builds into this brilliant chorus shouting â€œHey! Hey! Hey!â€ and gets any listener going.

â€œFrailâ€ is the track that begins to ascent to the climax of the record. Itâ€™s a track anyone can relate to, which is important because most of us have been in a position where we have felt frail. Itâ€™s fluid, one of those sit back and think tracks.

â€œVengeanceâ€ is the full scale of music, from top to bottom. The creativeness of this track is refreshing. Itâ€™s not predictable, and the listener doesnâ€™t know where itâ€™s going. But, after a few spins of the track, it becomes more of an anthem. The growling vocals blend well with the grinding notes in the chorus.

â€œFace Meâ€ is full on alternative rock track. The vocals are a little too close to vocalist Chris Brown (Trapt), and you have to double-check what band youâ€™re listening to. The lyrical content is inspiring… â€œbreak me, give me closure, break me, give me your word, so I can forget this.â€

â€œErasedâ€ begins with a deep opening, and truly defines this band. They speak through their music and force the listener to feel. In todayâ€™s popular music, there are songs that make you feel, but the musician rarely makes the connection with its audience. This track makes that connection. A staccato guitar riff accentuates the verses, which is transitioned to the legato chorus, via the crafty cymbal work. You feel apart of this song.

â€œDefendâ€ is so simple and yet so intricate. The tempo could be slightly faster on this track, only because the theme is defensive. The last half of the track brings out Emissary Echoâ€™s acoustic side with a break down, reinforcing the band’s talent.

â€œLet Goâ€ is the last track on this album brings the listeners journey to a close. Itâ€™s uplifting and inspiring and, like â€œDefendâ€ showcases the acoustic side throughout the song. It brings the album to a full completion and leaves you wanting more.

Overall, the album far exceeds anything a typical year-old band would release. Itâ€™s well put together and definitely can hang with the bigger guys in the rock industry. There are high hopes for Emissary Echo. Itâ€™ll be exciting to see what their future holds. â€œCan you feel, can you hear me?â€