Not too hard, not too soft, Laugh at the Fakes walks the perfect path between multiple music genres to a unique sound worth listening to.

Laughing at the Fakes, or LATF, is another promising band from north of the border. This four-piece from Toronto, Ontario formed in 2011, and consists of Everett Mason (vocals), Galen Weir (bass), Kevin Daliri (guitar), and Chris Avalos (drums). Dethrone The Crown is the second release from LATF with their 2011 EP, One Night Only, giving a good six-song preview of what was to come from this group.

The album was produced by Greg Dawson and mastered by Andy VanDette, giving this second effort a very smooth and polished feel. It is also a self-released project from the band. To give a short description of the musical influences heard on this album is close to impossible. There are, however, strong reminiscences from Iron Maiden, Megadeth, or Mastadon. One song, “And I,” would even fit into the glorious era of 80’s hair metal. 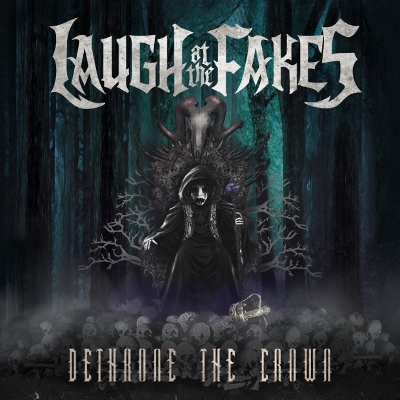 Laugh At The Fakes –
Dethrone The Crown:

“Got No Regrets” has an infectious chorus and massive display of Avalos’ drum playing. The lyrics are also quite introspective for society as a whole. Mason’s vocals on “Harmonica Playing Man” shows a nice range to his voice and truly makes the song what it is. Not enough good things can be said for Weir’s and Daliri’s playing on this release. The solo’s are just right and the low’s on the bass hit at just the right times to give the cuts just a little more than what would be expected on a sophomore offering.

On “Not Like Me,” Mason’s writing ability can be seen. The lyrics go as follows: “I got a funny feeling that you’re not that special / It took so goddamn long for me to open my eyes / I can’t believe the lies that I let you sell me / It all seemed so real when I was high as a kite.”

Having played with others in the scene like The Glorious Sons, Blaze Bayley, Warmachine, Slyde, and Blind Race, it’s no wonder LATF has a great fan base in Canada. Fresh riffs, great lyrics, deft drum work, and no cookie cutter songs all add up to one fine new album.

“Killing Time” by Laugh At The Fakes (with Lyrics)

The guys in LATF have one scheduled show coming in the next few weeks. If you’re in the area, it’s sure to be a great show with The Waxmen, Stuck On Planet Earth, and Run With The Kittens. The information is below: