Iconic metal vocalist, Udo Dirkschneider, is back with a new album showing the world more than 35 years later, he still has the voice for metal.

While those outside of metal circles might not be familiar with Udo Dirkschneider, anyone can recall rock radio in the 1980s, a harsh and powerful voice telling us to get our “balls to the wall.” Udo, of course, gained notoriety as the lead vocalist for German metal band, Accept, before later branching off with his own band, simply known as U.D.O.

Since 1987, U.D.O. has release 15 studio albums, the latest Decadent set for release on Feb. 3 in the US through AFM Records. Their previous album, Steelhammer, was released in 2013. Fans of U.D.O. will be happy to know this album will make a solid addition to their catalog.

The album consists of 12 tracks, opening with “Speeder,” a heavy driving tune in which Udo is really pushing his vocals. The song is an up tempo, fast guitar chugging piece, reminiscent of classic 80s metal, which pulls the listener in to the album. As the first track, it sets the stage nicely for the tracks to follow. 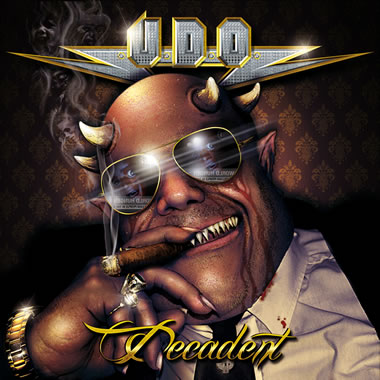 There are many standout tracks on Decadent, including “House of Fake.” A fast track, and a real headbanger verse with a more melodic chorus, and some interesting chord progressions. There is a socio-political aspect to the lyrics, which is nothing new for Udo. Interesting lyrical concept combined with varied musical structure makes this one most compelling tracks on the album.

The title track, “Decadent,” has a great potential for commercial success. The main rhythm line is an old school metal style march beat. The chorus is melodic and the vocals straightforward. To lyric are a commentary on social injustice as is evident in the music video, release in December 2014. The bridge is driven by steady bass and alternates with guitars and Udo’s vocals. It has flair of a classic Accept song, but updated for today.

Midway through the album, “Secrets In Paradise” pauses the pace to slow things down with an emotional ballad. It begins with an acoustic piece, which gives way to melodic guitars. The subtle emotion of the medley contrast nicely with Udo’s raspy vocals. The heavy pace of the rest of Decadent, “Secrets” offers a much needed break.

“Pain” is a great song, and a fun one to listen to. It has all the elements of a classic metal anthem, its solid beat, up beat chorus, and guitar solo. Think “Love Child” from Accept.

One criticism leveled at U.D.O. is their albums all sound alike. While this is an overly simplified generalization, there is some truth to it. The Sound U.D.O. has created over the past 20 plus years has stayed relatively consistent, and its not necessarily a bad thing. Fans of Udo from his days in accept and the nearly three decades of U.D.O. like the sound he has created and been faithful to.

Decadent also remains faithful to that sound. That being said, there are songs on this release which depart, though not greatly, from this classic sound adding interest making this one of U.D.O. stronger albums in sometime.