Margaret Young (vocals), Dave Adams (guitar), Jeremy Sparta (guitar/vocals), and Jason Delismon (drums) make up this four piece, A.D.D., based out of the Windy City. Starting out in 2007, they have amassed a loyal following in the Mid-west on word of mouth and live performances. As their bio reads, “the band has sold 6,000 CD’s independently and have amassed over 4,000 paid downloads.” This is impressive and speaks well to their efforts going into the sophomore effort, Core. The pedigree on the release will also please the audiophiles with the new album having been mixed by Tadpole (previously worked with Disturbed, 3 Doors Down, Staind) and mastered by Grammy Award winner Trevor Sadler. 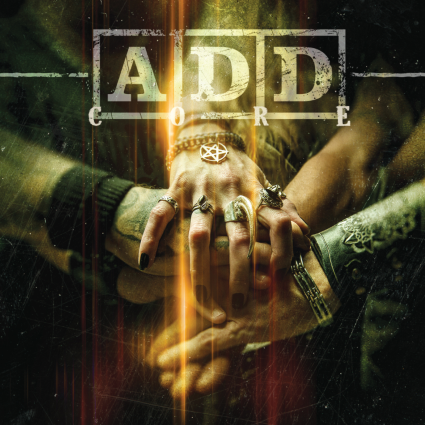 The record will drop Mar 24, 2015 on Pavement Entertainment records. There are ten songs on the album all together. Nine are originals with one cover being from Sevendust’s catalog, “Black.” There are no frills or extras on this CD. Voices, guitars, drums, and flat out, kick your ass, rock are all you get. While there are two very capable vocalists in the band, the duties are well divided and there isn’t a need to have dirty and clean titles given to ease bruised egos. “Was My Life” features Jeremy on the mic. His singing gives a nice counterpoint to Matilda’s more husky sound. Her vocals especially shine on “Damn Thing,” with all of the attitude that makes her a fearless singer. Jason’s nonstop, crazy percussion scheme on this song is truly missed to a degree unless you have a great ear or better headphones. He doesn’t have any time to spare or room to mishit during this song. When Jeremy is solely on guitars with Dave, the ease in which the two play together shows the level of comfort the two have with each others’ skills, such as on “So The Pain.”

It’s no wonder they have played with KORN, Chevelle, Halestorm, and Sevendust. If you want great vocals, instrumentals, and a fine touch in mixing the two together, give this one a try. They may be more regional for the time being, but this CD gives them a good shot at being much more attractive and intriguing to those outside of the Great Lakes area. Upcoming show dates are below. If you happen to see the band live at any of the shows, I’m curious to hear what you thought.

“The album shows the diversity of influences we all have. The title Core comes from our singer, myself, Jeremy, and Dave being the core four of the band. [It] shows our tight bond of brotherhood and sisterhood. Stay true to what you believe in and follow your dreams.” ~ Jason Delismon on what the album means to the band