With members spread across Europe and Asia, the all-female, hard rock five-piece, Dorja, has been making major waves online.

Slowly over the last week, information has begun to surface online about Dorja, which in turn has created quite a buzz about the group. With no weak links in the band, the members of the internationally based five-piece have all respectively performed at the highest level.

Lead vocalist Aiym Almas has received much attention on the L.A music scene, whilst guitarists Rosie Botterill and Holly Henderson until recently were two-fifths of The Sex Pissed Dolls.

Becky Baldwin is one of Bristol’s most established bass players having toured and recorded with the likes of iDestroy, Control The Storm, and Triaxis, to name but a few. Meanwhile, Belgian drummer Anna Mylee is currently based in Los Angeles under the mentorship of the legendary Kenny Aronoff and Mark Schulman.

National Rock Review recently got a sneak preview of Dorja’s impressive debut single, “Fire.” What can we say? The track has an infectious melody which immediately grabs your attention. The raw sound and energy is how we can only imagine Lzzy Hale fronting an “Appetite For Destruction” era Guns N’ Roses might have sounded.

“Fire” is full of powerful guitar riffs laid down by the formidable partnership of Henderson and Botterill, who easily play off each other. The rhythm section of Baldwin and Mylee lay down a tight groove, which is full of driving bass and snappy drums. Almas demonstrates her impressive vocal range. 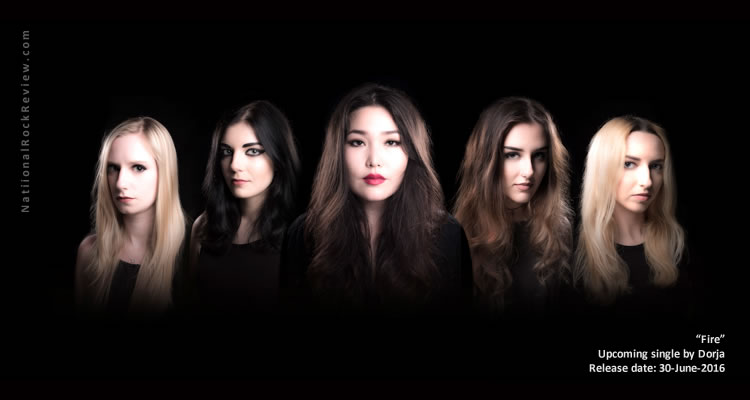 With “Fire,” Dorja have taken their classic rock influences and brought them up to date, to produce a fresh sounding, exciting, contemporary hard rock number, the likes of which we’ve not heard in recent times.

To coincide with the release of their first single, Dorja is also getting ready to play their debut UK shows, with dates already confirmed in Watford on Thursday, July 21st, and Birmingham on Friday, July 22nd.

“Fire” is available for download on iTunes and Amazon, and streaming via Soundcloud from June 30th.

We look forward to more of what is to come from this exciting new project.