They are celebrating 30 years of music with a double album of re-recorded Bonfire classics, including collaboration with a symphony ensemble, via UDR/Warner released on March 25, 2016.

Some of the German metal bands that come readily to mind are the Scorpions, Warlock, and Accept. The other is Bonfire. Though popular in their home country, Europe, and Asia, they have more of a â€œcultâ€ following in the US.

Bonfire was original known as Cacumen, a band which formed in Bavaria in 1979 and released four albums. 1986 saw the band change the name to Bonfire and release their first album, em>Donâ€™t Touch The Light. In the 25 years since, the band released a dozen more studio albums, including its 25th-anniversary album, Branded, in 2011.

With the new lineup in hand, Bonfire has announced a 30th-anniversary double album, Pearls, released March 18, 2016, via UDR/Warner. 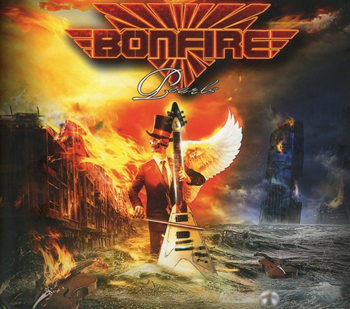 The production quality for the songs on the Rock disc reintroduces fans to classic Bonfire with a bigger, fuller sound than the original. The disc includes favorites, such as “Strike Back,” “Sweet Obsession,” and “America Nights.” It also includes a rocked up version of “Sweet Home Alabama” from Lynyrd Skynyrd, Hans Ziller’s favorite US band.

The Classic disc offers orchestrated versions Bonfire tracks, which give them a fresh sound especially for the ballads as “Give It a Try” and “If It Wasn’t For You.”

Overall, the album gives new life to their songs making the Pearls double album the perfect addition for a long time Bonfire fan or those looking to experience the band for the first time. The release does the band justice, and their music still sounds great!