One of the leading blues groups in the Midwest, The Jeremiah Johnson Band, are back with their new studio album, Blues Heart Attack.

Hailing from the River City of St Louis, Missouri, The Jeremiah Johnson Band has built up somewhat of a following in their home state. The group has undergone some changes in recent times, losing their horn section, The Sliders, for a more traditional blues power trio format. The JJB’s 2015 critically acclaimed album, Grind, was produced by fellow St Louis native Devon Allman (Royal Southern Brotherhood, Honeytribe). 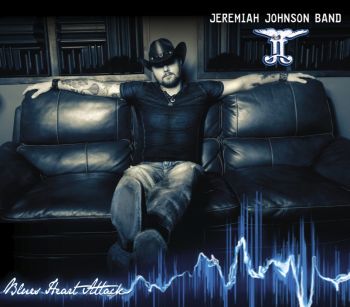 Blues Heart Attack opens with “Mind Reader” and it’s immediately apparent that the band’s sound has matured and evolved since the release of Grind. The recording includes special guests Nathen Hershey on Hammond B3, Wurlitzer, and Piano and Frank Bauer on Sax. The pair proves to be the perfect foil for the well-oiled machine that is the JJB.

The addition of Hershey and Bauer give the band a more soulful sound; they add a nice texture to the band’s powerful blues groove characterised by the driving rhythm section of Jeff Giradier (bass) and Benet Schaeffer (drums). Add in the incredible guitar work and vocal prowess of Jeremiah Johnson and all of the working elements come together to produce a rather distinctive sound.

Tracks like “Room Full of Fools” is blues rock with attitude and features a sublime solo by Johnson, which demonstrates his appreciation of space. On the other hand, “Flatline Blues Heart Attack” is a jazzy blues number in the vein of Robben Ford.

The band changes up the pace with “Get In The Middle,” an old school rock n’ roll number with undertones of fellow St Louis legend, Chuck Berry, which features a great Honky Tonk piano solo from Hershey.

In contrast to the previously mentioned songs, Blues Heart Attack is interspersed with slow, soulful blues numbers such as “Summertime” and the heartfelt “Here We Go Again.”

The up-tempo “Skip That Stone” has an Allman Brothers-esque quality with the guitar riff and superb tone, reminiscent of the Brothers classic, “Jessica.” The track also features some great blues harp playing from Tom “Papa” Ray, who can often be found sitting in with the band whilst performing in St Louis.

“Talk Too Much” is a dirty blues number, whereby the band let’s go, with each member taking the spotlight from the tight bass groove of Giradier, the sublime Hammond playing of Hershey, who seems to be channelling Booker T Jones, and Bauer, who lets loose on sax.

“Sun Shines Through” adds some funk into the equation before the band reworks one of their more familiar songs, “Southern Drawl,” originally featured on their album, Brand Spank’n Blue.

The album closes with “It’s Been Hard,” one of the standout tracks on the album, which highlights Johnson’s powerful vocals.

The Jeremiah Johnson Band are the real deal; they encapsulate blues rock at its best. This album will hopefully prove to be a springboard to take them out of their native St Louis and establish the band on the international blues circuit, a place worthy of a group with such talent.

Photo: Â© Angela Allen / When I Grow Up Photography