The ‘Queen of the Slide Guitar’ Erja Lyytinen returns with the eagerly anticipated follow up to her 2017 album Stolen Hearts. 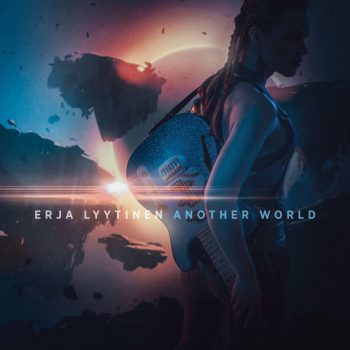 Since the release of the aforementioned record, Erja Lyytinen has been far from resting on her laurels. Over the last two years, Lyytinen has featured on Finnish national TV as part of the Stars Stars TV series, shared the stage with guitar legend Carlos Santana, played in front of a crowd of 80,000 people in her hometown of Helsinki as well as performing in excess of 100 shows per year. These are impressive additions to Lyytinen’s already glowing resume, to say the least.

For Erja Lyytinen’s latest offering she recruited a whole raft of her esteemed friends and colleagues to feature on the record including slide guitar master Sonny Landreth and former Michael Jackson guitarist Jennifer Batten.

Lyrically the songs are some of the finest Erja has written. With tracks on the record at times very personal and raw, you really find yourself drawn into the song lyrics. Likewise, the track listing and the way the album is sequenced clearly illustrates the underlying theme or story to the record. Like a completed jigsaw puzzle it all just fits together so well together, this in turn perfectly compliments the overall flow of the album.

Another World gets underway with the rather funky “Snake In The Grass”. The song’s heavy groove and reptilian context give guest guitarist Jennifer Batten the opportunity to showcase her slide guitar skills by emulating the sound of a serpent slithering around throughout the chorus. Collectively the pair comes together with some blistering twin part guitar harmonies. This being just a taste of what is to come when Erja and Jennifer hit the road together in April on the forthcoming ‘Monstress of Guitar’ tour in Finland.

Lyytinen changes gears, quite literally, with the jazzy sounds of the epic “Cherry Overdrive”. The songs catchy hooks, sultry tones, dreamy breakdowns and intoxicating melody simply sweeps you away. As Erja’s fans would want and expect there are guitar solos aplenty throughout Another World, but the solo on this track, in particular, is a fitting centrepiece of the song and it’s definitely otherworldly.

Again, “Hard As Stone” is lyrically quite deep grappling with the subject of feelings of loneliness and oversensitivity, and as a result, there is a lot of raw emotion feeding into the song. This, in particular, is really highlighted in the guitar solo in the latter stages of the track which is full of fiery playing from Erja.

On the other hand, “Wedding Day” takes the sound on the record in a slightly different direction. The song is an incredibly infectious foot stomping, slide-fueled blues-rock number that tackles the subject of an eager bride in waiting and infidelity within a relationship. The song also features some sublime slide play from guitar hero Sonny Landreth.

One of the stand out tracks on the record is the lyrically and musically emotive number “Miracle”. This being the Finnish guitar goddesses’ tribute to her twin boys, and the song even features a brief appearance from the boys themselves. The passionate guitar solo during the song’s breakdown is one of the many highlights of the album.

Lyytinen really pushes her creative boundaries with the heartfelt ballad “Torn”. Well renowned for her slide guitar play, this track features something a bit different with a rare performance of Erja playing the violin. This, in turn, adds texture to the song and perfectly complements the Celtic feel to the number.

Of course, prior to the release of the record, Lyytinen released two tracks from the album including the sci-fi tinged progressive-rock title track and a bitter-sweet bonus song “Without You”, which both feature and certainly hit the spot. Another World comes to its conclusion with the poignant and somewhat heartbreaking ballad “Break My Heart Gently”.

Not only has this record challenged Erja Lyytinen from a music and lyrical point of view but also in terms of production. This is due to the fact that Another World marks the first studio album which the Finnish singer/songwriter and guitarist has self-produced, and the end result is astounding. What can we say, Erja Lyytinen’s new album is simply out of this world.

Another World by Erja Lyytinen will be released in the UK on Friday 26th April via Tuohi Records. The Finnish slide-guitarist returns to the UK for a nationwide 12-date tour including dates in Glasgow (March 23), London (March 26) and Birmingham (March 28). Tickets for all dates are available now via www.solidentertainments.com or from the Box Office (no booking fee): 01472 349 222 (Mon-Fr: 9am-5pm).