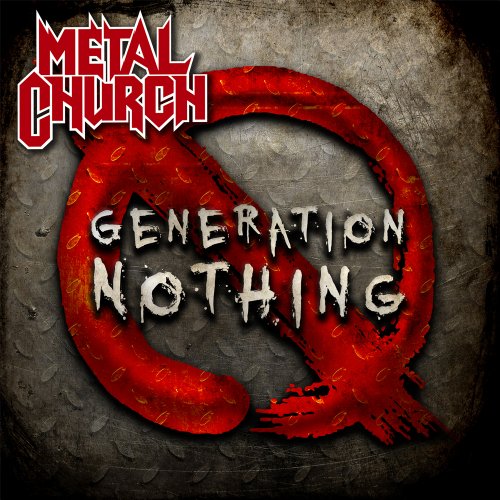 Generation Nothing is the 10th studio release from the early pioneering thrash metal band Metal Church. Not often mentioned with bands like Metallica, Testament and Exodus, they were in fact there from the beginning of the thrash movement, even touring with Metallica. Metal Church is widely known and respected for their contributions to metal, especially with the first two of their studio albums.

The band has had 2 reunionsÂ and a list of different band members with KurdtÂ VanderhoofÂ being the sole remaining member of the “classic” line up of those first few releases. It should be known that Kurdt formed the band from the very beginning.

The band states that this new release has a lot in common with the first two releases. After listing to the CD I can say this is fairly true. When an old band makes claims that their new material is in the same lines as their older and highly praised records, it always raises a red flag. The problem with this is the overall sound of the albums in general. The musicians see a more direct line of sight into the music whereas the average listener hears the whole package. Albums released in the 80’s typically had a certain type of sound. There tended to be a lot of reverb, the mixes were thick and the instruments tended to blend more together. There was also a generally warmer feel. With today’s recording technology and techniques, it simply does not sound the same.

I think that this new release fromÂ  Metal Church is very good. The songs are good, they are arranged well and they draw interest. The album opens with Bulletproof, then into Dead City and right into Generation Nothing before the gears are shifted. It is really cool how these three songs all have what I call that “rolling effect”. This means the songs cruise along at a fairly moderate tempo, they have the feel of movement but they are not blazing. The feel of the album in general is a really good one. The songs are the type to make you want to move, more so that standard head banging. The song Noises In The Wall changes the pace with a slow build up intro into a cool bass groove. The song actually reminded me of Krokus’ Screaming In The Night, however Krokus it certainly is not.

Suiciety is quite familiar if you’re a fan of the first self titled album. The vocals on the whole are very good for this band in that voice of Ronnie Munroe has the familiar Metal Church sound though at times his voice does sound a bit strained.Â  All of the music is extremely well executed, very tight and precise in the tradition of thrash metal.Â  Credit is due to Rick Van Zandt on guitar, Jeff Plate on drums and Steve Unger on bass for really making this a Metal Church album as we the fans would hope to have.

I am somewhat surprised to find that the album was produced by Kurt. I personally do not like the overall sound of the album. It sounds thin and somewhat flat. The guitars are distorted, but they lack an impact, that oomphÂ that really kicks your ass. It seems just too tame a sound for these songs. I’m pretty sure this was done digitally which can make any band sound this way. I really can’tÂ knock KurdtÂ for this, it’s nothing that the most successful bands out there aren’t doing. I can say that if this wasn’t the case regarding the aforementioned, this album would sound as good as it really is and connect more with their early and in my opinion best material.

That said, a great album, great songs and a really good job with the comeback of Metal Church!