Vintage Trouble starts 2015 with a bang, as they enter into the studio to record the follow up to their debut album The Bomb Shelter Sessions, before embarking upon an extensive UK tour.

Vintage Trouble formed in L.A. back in 2010, and are managed by the legendary Doc McGhee (Kiss, Bon Jovi, MÃ¶tley CrÃ¼e). Vintage Trouble is, Ty Taylor (vocals), Nalle Colt (guitar), Rick Barrio Dill (bass), and Richard Danielson (drums). Their 2011 release The Bomb Shelter Sessions has been well received around the globe, as a result of which, the band has been in constant demand for the last four years.

As we enter the New Year, so now starts a new chapter for the band. Following on from last summer’s â€˜Swing House Acoustic Sessionsâ€™ EP, the band has been writing new material for their eagerly anticipated second album. The untitled project will be the bandâ€™s first album release since they formed a union between, Vintage Trouble records and Blue Note, under the leadership of Don Was early last year. Having never been a band to shy away from playing new material as part of their live shows, the track listing on the new album has been a subject of much speculation and debate from the bandâ€™s loyal â€œTroubleMakerâ€ community.

Last year saw Vintage Trouble tour across Europe, North America, and Japan, as well as appearances at some of the worldâ€™s most prestigious festivals like, Glastonbury, Summer Sonic, and the Montreal Jazz Festival to name but a few. VT also made high profile TV appearances, performing live on the likes of, The Tonight Show with Jay Leno and The View with Whoopi Goldberg.

Now with several successful UK tours under their belt since arriving in the UK back in 2011, including shows with The Who and The Rolling Stones, the band returned to their second home in March. Vintage Trouble will reunite with Paloma Faith as support on her prestigious UK arena tour, before embarking upon a seven date UK headline tour. The tour will visit York, Bristol, Norwich, London, Manchester, and Holmfirth, before finishing the run with a return to the O2 ABC Glasgow, a venue which has a lot of great memories for them, it was featured on their â€œ80 Shows 100 Days/Live from Glasgowâ€ DVD.

National Rock Review recently caught up with Vintage Trouble to get an insight into their upcoming album, the UK tour, the TroubleMaker community, and their plans for 2015. 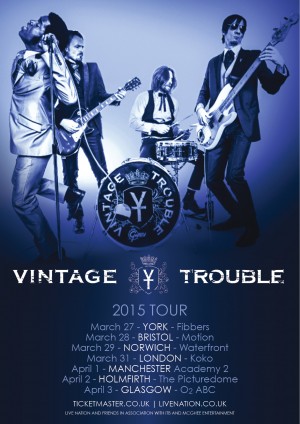