New England metal band Vattnet Viskar talked with NRR about their history, music, and fans while they tour the northeastern states.

In the world of metal, you have all the stereotypes you could dream of. You have the bands that scare mothers at every tour stop, the bands that push the stage show to the limits, and even then bands youâ€™d swear made a record deal with Lucifer himself.

The guys in Vattnet Viskar will surprise you. The music is the driving force for their sound and the energy from the crowds at shows. Even with the admission from one of the guys about seeing a Phil Collins show at a young age, or how down to earth the guys are, the sound of Vattnet Viskar is still heavy and deep and worth a listen to.

NRR: What does the band name mean?
Chris: Itâ€™s Swedish it translates to the â€œwater is whispering.â€ But the origin story is not so epic. So, we were, Chris and I when we started this we were writing some black metalish stuff, we were just kinda of looking for a black metalish sounding band name. We didnâ€™t know at this point if it was going to do anything and one of his exâ€™s had a screen name years ago that was Vattnet Viskar.
NRR: Are you guys all the original members?
Nick: Chris and I are.
Chris: Seamus has been in for quite a while now. Joeyâ€™s been off and on, like a back up. Bassists, we kinda ofâ€¦ hit, hit a little bit of a situation with our bassist. They keep dying!
NRR: So, if you had to narrow it down to one element of how you guys play music, what do you guys love the most?
Seamus: Fast.
Nick: I like the dynamics; I think is our strongest thing going for us. I hope the simplicity, like this, up and down sorta ofâ€¦ you know real soft into the real heavy parts makes it stand out.
NRR: Any notable influences from other bands or other sounds that might have made your sound, yours; and if thereâ€™s one that stands out, who?
Chris: I would say for me and I probably speak for most of us, Neurosis & IceSis are big influences on us. Not so much like, musically as much, but more longevity and kind of how theyâ€™ve sustained stuff like that. â€¦And taking that and putting it towards black metal. It makes us a little more unique, you know standard satanic stuff.
NRR: Has this always been your sound or has it evolved into that?
Chris: In a way, I think itâ€™s always been there, we just kinda of reluctantly…. When we first started doing it, â€œwe need to be like Wolves in the Throne Room, or gasospheric black metal. We canâ€™t have these types part here and there, we kinda of have to stick to this.â€ And then, I think we just kinda of let our hard core, metal core, influences from our teens and twenties just like, peak inâ€¦ and that kinda defines it a little bit more.
NRR: What two songs would you want everyone to hear off the newest release and why?
Seamus: I would want to have people hear Breath of the Almighty and Apex. Because those are the only two song titles I remember. (Insert way too much laughter) No, really, those are my two favorite songs off the album. I really like Apex, itâ€™s my favorite song.
NRR: Do all four of you claim writing credit? Or is the majority of the writing done by one person?
Chris: We all kinda have writing credit, you know.
Seamus: They start the riffs. (Seamus pointing to the guitar players)
Chris: The arrangement and how things go is like a group effort.
Nick: And a lot of tweaking in practice.
NRR: Why should people come see your show?
Chris: To get off their ass. To get off of Netflix for five minutes. We move around more then most metal bands.
Seamus: I think weâ€™re a good live metal band.
Chris: Iâ€™d rather people see us live then find us on CD.
Nick: I definitely like the raw sound more.
Joey: Itâ€™s more of an experience.
NRR: If you were trying to get a message out to your fans or the masses, is there a message?
Nick: The lyrics are the last thing that gets written. Itâ€™s not like thereâ€™s no meaning behind them, but thereâ€™s a very vague meaning behind them. Or, itâ€™s just a lot of mental imagery and stuff like that. The last song on the album, Apex, is my favorite song to play live and probably the most meaningless lyrics to me. But somehow the song is the most emotional one to me.
NRR: So, in the 3 and 1/2 years that you have been together, whatâ€™s been the biggest crowd? And what was the vibe like on stage?
Band: Probably like a thousand-ish. Super awesome. They were, like, waving their flags. Itâ€™s weird for us playing shows that big. Itâ€™s cool, itâ€™s just weird.
NRR: So if you could get on any tour/festival, which one(s) would it be?
Seamus: Warp tour. We definitely want to play Warp Tour for some reason. Because, I mean, no one else is going to do it. So we might as well do it. It would be weird as fuckâ€¦ just because. Mayhem Fest or we were talking earlier, I would do the Gathering of the Juggalos in a heartbeat, a fucking heartbeat. And I would even wear the paint.
Chris: We like weird line-ups.
NRR: Most awesome band youâ€™ve played with so far? 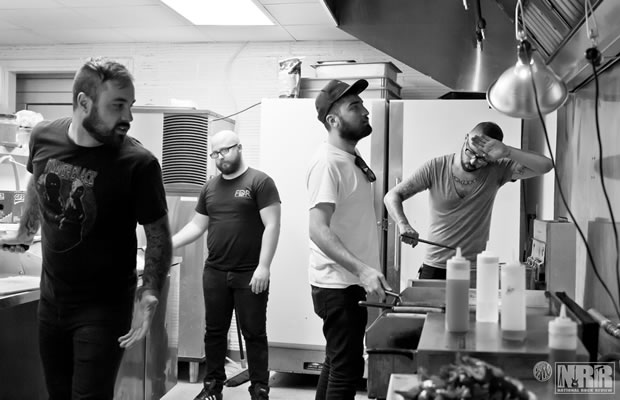 If the gigs don’t keep coming…