Willie from the Simpsons, the guy on the grass commercials, the best secret agent in the Queen’s service, and now comes Terry McDermott at you.

Terry McDermott, Peter Klett, Island Styles, Mark Mattrey, and Ehssan Karimi make up the band known as Lotus Crush. The music experience within the band is nothing to laugh at. With a new album, Rabbit Hole, on Cavigold Records and one leg of the current tour over, the guys are in the middle of many busy things. We managed to get Terry to give us a few minutes to talk to us at National Rock Review about all of that and more. Please enjoy the piece, and is it just us, or would he have won if there had been a kilt involved?

“There’s a new element of freedom here I wanted to write songs that encompass my view of the world we live in. It can be a fairly oppressive place, and it’s a difficult landscape for a kid to grow up in or a man and woman to live in. We’re pushed and pulled in all different directions by media, politics, and an ever bleaker-looking future. There’s a perpetual conveyor belt of elements trying to get into our heads for attention. It’s a battle for our hearts and minds. That’s what the song is about.” ~ Terry McDermott

NRR: Thanks for taking a few minutes to talk to National Rock Review. You guys are getting ready for some big things. What’s been going on with the band in the last six to twelve months?
Terry McDermott: Thanks for talking to us. We’ve been touring a lot. We played a European tour back in May/June through Poland, Belgium, Czech Republic, England, and Scotland which was an incredible experience. We’ve since been shooting a music video for “All The Same”, cutting a track at Robert Lang Studios for C. Thomas Howell’s charity project, This Time Tomorrow Foundation, and lastly, we just completed a coast to coast tour of the US. So yeah… we’ve been kinda busy. 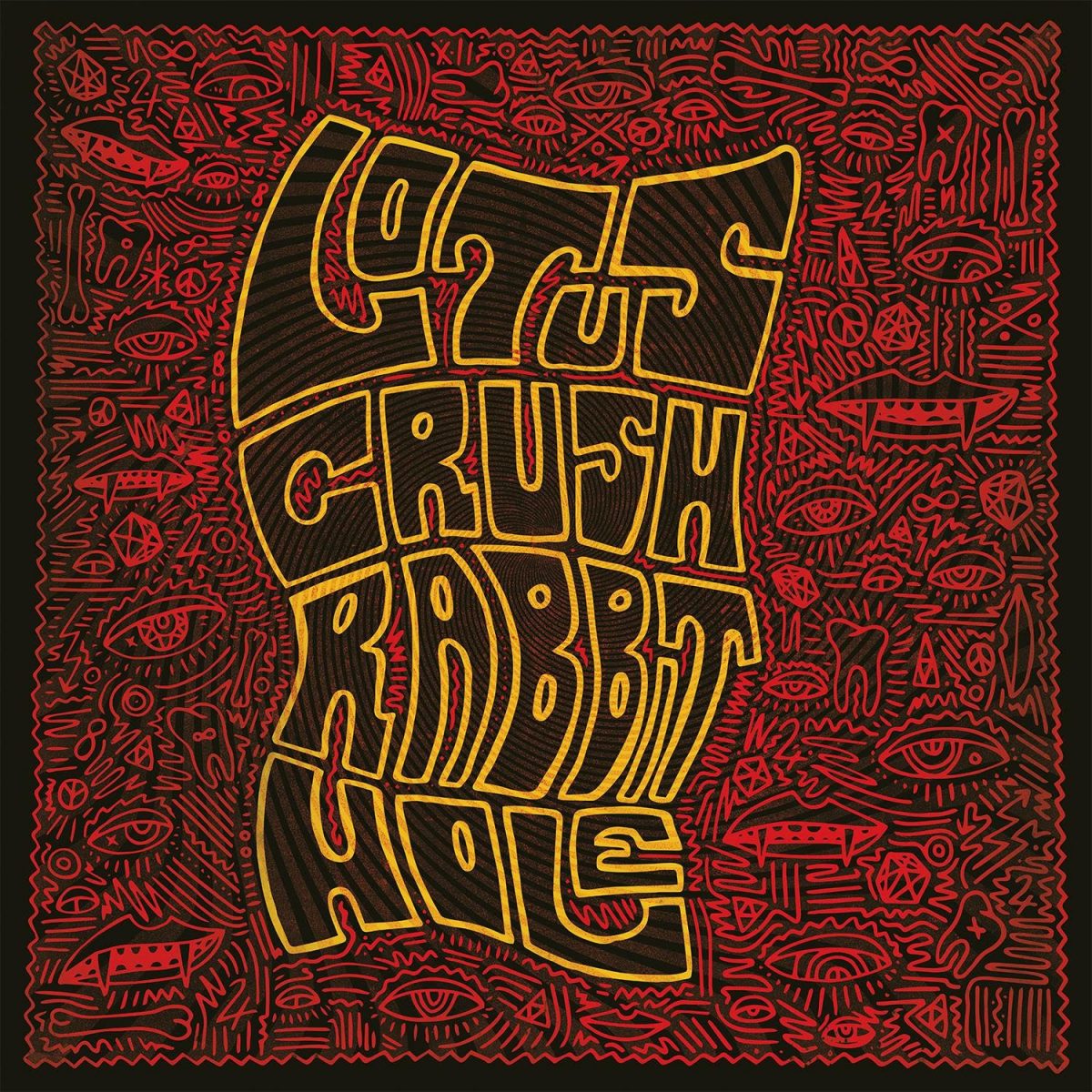 NRR: You released, Rabbit Hole, in April of 2015 if I remember correctly. What on that release makes the record special for Lotus Crush?
Terry McDermott: Itâ€™s not easy with a major label deal to find the kind of record label willing to really back its bands and Cavigold has given us the time and tools to make the kind of record that we wanted to make. We got to make the kind of evolution from our debut record that we wanted to see. I know we certainly hear that listening to the record.
NRR: The first single off of the new album looks to be “Hearts and Minds.” What was is about this song that reached out and said it should go out first?
Terry McDermott: â€œHearts And Mindsâ€ typify the messages of the record. Our world is a fairly oppressive and sinister place to live and more than ever, the dystopian social predictions of Aldus Huxley and George Orwell have grown eerily close to our lives. The song has the immediacy to step up and say, “hey… this is what the fuck is going on”.
NRR: How was the experience of signing with the new record label, CaviGold Records, and what happened to lead up to that deal that you liked them enough to sign up and get to record number two?
Terry McDermott: We were tricked, (laughing)! Scott McKinley from Cavigold Records photographed Lotus Crush back in an earlier incarnation around the time of our debut, Half Light Morning. He really liked what we did back then, and he asked us to reform for the one-off celebration of 40 years of Robert Lang Studios in Seattle in 2014. We flew up and played the show and he kind of burst in on us like a label ninja and said, “Iâ€™m actually signing you to do a second record.” Once we grasped how very serious and dedicated to the idea he was, we got to work.
NRR: What is a typical writing session like for you guys, is it one person does the lion’s share and everyone else fills in or is it a group project from start to finish?
Terry McDermott: Peter Klett and I wrote the first record, and for the second, we added my friend and producer, Todd Burman, to the team. We did it old school with the producer helping shape the record. It was a no-brainer for me, as I already had written with Todd on my solo stuff, and we’d had some chart success. It was a great fit.
NRR: A little bit of the background was that a fateful tour between Candlebox and Driveblind in 2006 lead to Lotus Crush. Was it really that simple or was there more to how you guys came together for the band?
Terry McDermott: The seed was definitely that meeting but after Driveblind broke up, I went off and took shifts singing in Bourbon Street bands in New Orleans to pay the bills, and Pete went back to touring with Candlebox, so we both had a bit of living to do before the seed grew I guess. We worked up demos in 2009, I think, which was three years after that first meeting.
NRR: You come from a city with a great musical legacy. How would you describe the band’s vibe as if you were talking to a new fan about to see you live for the first time on stage?
Terry McDermott: We’re super melodic British/American indie pop rock. I think you can hear the bands Seattle origins in the sound, as I like to think we follow in the tradition of great live North-West bands but with an accent from Aberdeen, Scotland in places.
NRR: I see you’re out on tour in support of the new album. Who are you out with and how have things been so far out on the road for you?
Terry McDermott: We just wrapped the tour two days ago, and it was a great run with now-label mate, Craig John Davidson, from my hometown in Scotland, who will be releasing with Cavigold. The tour turned the record into a greasy mean live show, so it was a great success.

NRR: You’re not a DIY band in the sense of the phrase. Is merchandise sales at shows as important to you having label support or is it still as vital for expenses and fan interaction as a new band on their first tour?
Terry McDermott: Itâ€™s utterly vital! We have a label with teeth, but itâ€™s not a major. We’re still an indie band on an indie label, living in a difficult climate for musicians so we really do see the benefit of fans buying merch and coming out and talking to us.
NRR: You’ve been around the block a few times by now, is there a moment that even now at any of the stops you’ve been at band-wise, when it gets brought up, you can’t help but laugh about it unabashed? A Spinal Tap moment if you will that you’d be willing to share with us?
Terry McDermott: We’ve played some incredible shows to big crowds on this run but I can’t even begin to explain the sense of irony floating around the bus when we’re all sitting watching Spinal Tap and quoting endlessly only to bump into one strange gig on this tour which was effectively at an Italian restaurant in the middle of nowhere. The looks on faces were priceless, but the sound system was somewhat… lacking. We definitely saw the bizarre “Tap-ness” of it. The pasta was exceptional, though, and the owner was a Gent.
NRR: I’m sure you’ve been asked this before but, what’s the story with the name of the band and what’s it mean for you?
Terry McDermott: In a nutshell, itâ€™s a reference to the Lotus Eaters of Greek mythology. When making the first record we kinda joked we were like the Lotus Eaters, except our endless state of bliss, hauling us off from reality, was our apparent addiction to music and not seeds.
NRR: Do you as a band find that the prior stops with other bands and the musical experiences gained from them have helped to smooth out the road for Lotus Crush or have their been growing pains even for you guys?
Terry McDermott: Itâ€™s a massive help. Pete and I often vocalized our desire to use a lot of the mistakes made or lessons learned in our previous bands to help avoid the icebergs. And we remain pretty conscious of making that important. All the rest of the guys are just great blokes, so we have a good solid care and respect for each other. There’s a sense of pride in what we do.
NRR: You have to be truthful answering this one, what is the earliest record, artist, song that you can think back liking as a child that might get you teased by the other guys in the band now? And we promise not to tell them anything…
Terry McDermott: For me the earliest itâ€™s either “Water Of Love” by Dire Straits or maybe “Desperado” by The Eagles. But the one that might get me teased would be “Manic Monday” by The Bangles. Still love it!