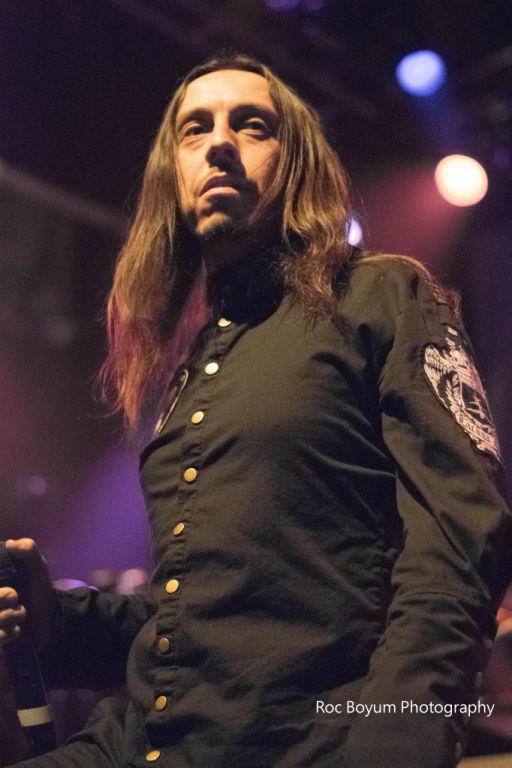 To launch the release of Broken Crown Halo in the US, Lacuna Coil, will have their CD Release show right here in Los Angeles, at the famous Roxy Theater in West Hollywood, California. The CD Release Show at the Roxy will coincide with the same day release of the new CD Broken Crown Halo for Lacuna Coil Fans nationwide, so the Los Angeles fans get an extra special treat! To get into this special CD Release show, just buy the new CD at the door and you get into the Roxy show for FREE!!

Lacuna Coil exploded into Los Angeles for the Hottest Chicks In Hard Rock tour on March 19 at the House Of Blues. Cristina Scabbia undeniably one of the Hottest Chicks in Hard Rock and Metal today, shared the evening with Emma Anzai from the Sick Puppies, Sisters Alexia and Anissa Rodriguez from Eyes Set To Kill, and Uliana from Cilver. The great thing about these ladies is that they are all about the music and they can shred your face off â€“ more about this show later.

We were extremely fortunate to be granted an exclusive LIVE video interview with Andrea Ferro of Lacuna Coil prior to the House of Blues show, so we dashed across town on another beautiful Southern California Day, 80 degrees in March, to set up our equipment prior to their show.

We set everything up outside upstairs in the back of the House of Blues, with the Los Angeles skyline in view, it seemed a perfect setting to talk about the release of the new Lacuna Coil CD Broken Crown Halo in the US on April 1st. Realizing that this was one of the last nights of the Hottest Chicks in Hard Rock Tour, it would end the very next night at the House of Blues in Anaheim, we were anxious to find out what was next for Lacuna Coil!
Andrea met us upstairs and we started talking about everything that was going on with Lacuna Coil.

With the much-anticipated release of their new CD Broken Crown Halo April 1st on Century Media Records, there is a combination of both excitement and sadness. This will be the last CD with guitarist Cristiano ‘Pizza’ Migliore and drummer Cristiano ‘Criz’ Mozzati.

After 16 years, Migliore and Mozzati decided to retire from the band citing personal reasons and wanting to make a change in their lives. It was a totally friendly split with no drama and mainly because they didnâ€™t want the touring life anymore.

They gave the word to Lacuna Coil last November while the band was busy planning their intense upcoming 2014 tour, and they decided that after 16 years of recording and touring with Lacuna Coil, they wanted to stay home and spend more time with their families. â€œIt was the right thing for them to do at this point in their lifeâ€, said Andrea, â€œand we were happy to support their decision. There was no drama just friendship. We are sad to see them leave, but excited about our next adventure.â€

With all the drama surrounding other bands and their member changes, it was really nice to see so much friendship and support. Andrea jokingly said, â€œMaybe we would have received more press, with more drama!â€

The drummer that is filling Crizâ€™s spot is Ryan Folden. Ryan was Crizâ€™s drum tech and has toured with Lacuna Coil as a fill in drummer for the last year because Criz was home with a newborn baby girl. â€œWe knew Ryan already and it was the most natural choiceâ€, says Andrea, â€œand we decided to go with one guitar and the response has been really good.â€

The new CD, Broken Crown Halo, began in Italy when Marco was recovering from an arm injury and was watching Italian Horror films. He was inspired by the gothic films and began writing the music that would become Broken Crown Halo. Andrea and Cristina worked with Marco in his home studio and the magic began. There is truly a gothic feel to the new CD inspired by the Horror Films and realigning Lacuna Coil back to their Dark Gothic roots. The first single, Nothing Stands in Our Way, was released on February 7 and the follow-up single, Die and Rise, was released on February 18. On February 20, Lacuna Coil released the lyric video for Nothing Stands in Our Way, which is an anthem of overcoming darkness and finding your way through dark times, a theme we can all relate to.

The entire package from the cover artwork (a Gothic drawing of a crown for a King and Queen done by Marco and made into a 3D image by the graphic artist at the record company) to the haunting melodies, aggressive music, and vocals and the very personal content that covers the scope of intense feelings over the last year make this a passionate and beautifully dark CD.

Andrea talked to us about how it feels to be surrounded by all the Hottest Chicks in Hard Rock, as well as the plans for the upcoming Lacuna Coil headline tour. He also talks about working with our very own award-winning Los Angeles Producer Jay Baumgardner from NRG Studios and how the recording and songwriting process has changed. He also has some advice for everyone starting their own band and starting out in this crazy business.

After the interview, we went inside to a packed House of Blues with people ready to see the Hottest Chicks in Hard Rock Tour and ready to see all these bands rip this club apart. Cilver and Eyes Set To Kill tore up the stage (more on them later), but everyone in the audience seemed to be waiting for the incredible Metal Firestorm from Italy! As each member of Lacuna Coil walked out, the eyes of audience were fixated on the stage. Then, when Andrea and Cristina walked out on stage, the audience erupted into a frenzy. From the first note of Trip The Darkness to the last note of Our Truth, it was an incredible set of Master Italian Metal only Lacuna Coil can deliver.

The set was a little shorter due to the time constraints for four bands. But I guarantee that Tuesday Night, April 1st, Lacuna Coil will deliver a full night of Italian Gothic Metal. With the release of their new CD, Broken Crown Halo on that very same day, the Sunset Strip in Los Angeles and the Roxy Theater will explode with the amazing Italian Metal Masters. You do not want to miss this show!

Be sure to check out the Exclusive Live Video interview below with Andrea of Lacuna Coil as he explains in-depth everything I touched on in this article. Also check out the photos from Lacuna Coilâ€™s set from House Of Blues show in Los Angeles.

Be sure to be a part of history as Lacuna Coil hits the stage at the Roxy Theater in LA on April 1!