When you learn egos kill your band and hard work will save it, you’ve gotten one step on the pack. Kelly of NoMara certainly does.

John LeCompt (guitar), Kelly Burdge (vocals), Thad Ables (bass), Josh Grissom (guitar), and Jack Larson (drums) are the epitome of hard work and sincerity, or NoMara for fans of theirs. Originally formed in 2009, they took some time off and reformed in 2012. Now touring to support their new EP, â€¦And So It Begins, the band is looking to get away from previous band member stops in bands, like Evanescence and Machina, to reinforce their brand and sound in the rock world.

We managed to track down Kelly to ask him some questions about the band, his experiences with Tesla, and brewery networking strategies. Get a tall, cold one and have fun with this conversation.

NRR: Thanks for taking some time out to answer some questions for National Rock Review. What’s been going on with the band, NoMara, in 2015?
Kelly Burdge: On behalf of the band, you are welcome and we appreciate it! This has been a great year for us. We hit the ground running in January going on a run of shows with Tesla and have been hitting the road on and off ever since. 2015 for us is strictly about getting our music to the people and developing those critical relationships with new fans. We released a five song EP titled, â€¦And So It Begins, as a precursor to the full-length record due out early 2016. We also shot three videos to support the EP. We are very proud of this upcoming record; hope rock fans get the chance to hear it. In order for that to happen, we need to get out there and rock their faces off!
NRR: Your recently released EP album is â€¦And So It Begins if my memory isn’t horribly fried. How was recording with John doing guitar and producing on this album?
Kelly Burdge: John is an incredibly talented musician. At every level from player to producer, to engineer he has to be one of the best out there. When people ask me what itâ€™s like working with John, I keep coming back to the same response, â€œsurreal.â€ He can be very demanding and there have been many times I have just wanted to pack up and go home. When he is in producer mode, the best thing for me to do is stay out of the way and wait for instructions. One of the cool things about the two of us writing songs is he is able to get things done quick, very little wishy washy, what should I do here stuffâ€¦ very organic and instinctual. 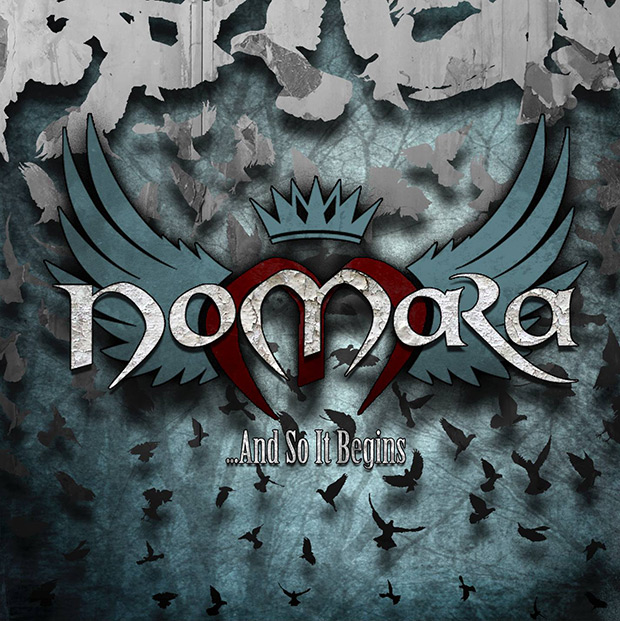 NRR: It’s very cool you guys are giving the digital version of the EP for free to your fans. Will you walk me through how that came to be and how many accountants hyperventilated because of that decision?
Kelly Burdge: From a business standpoint most CFOâ€™s would agree that a company that gives away its product will not be around very long and in most instances that is the case. Unfortunately, the music industry is up in the air when it comes to which formula works. For a newer band like us getting heard is the most important thing we need. Expecting people to download your music and pay for it when they have never heard of you is unrealistic especially when they are being bombarded by crappy ads millions of song choices. We did sell the EP for the first half of the year for only $5.00, which people find very reasonable, but even then hundreds may have left the show without one. We decided to give the download away and a hard copy at the shows for the rest of the year. We believe that it will pay off next time we come through. Hopefully those folks rocked it, loved it, shared with friends, learned all the words, and will be front row next time!
NRR: How did you settle on the name, NoMara? Buddhist Demons are pretty metal, especially lords of destruction, so what hooked you about it?
Kelly Burdge: All of us have our demons and temptations to deal with but in regards to how it applies to the band name, NoMara is about not taking out your personal problems on the people closest to you. Many of us have a tendency to verbally attack one another in a manner that resembles throwing darts at a pool hall. Just one or two stabs here and there wonâ€™t bring you down but over time those darts take a toll that leads to complete destruction. In this instance, â€œMaraâ€ is the evil one inside us, â€œNoMaraâ€ is when we accept personal responsibility and recognize our loved ones are not the devil, they are not the fight. The fight should be internalâ€¦ NoMara.
NRR: You guys, as a band, were around in 2009, took a break and got together again in 2012 or so. Was the need for a hiatus due to other projects and what caused the desire to reform and write new material exactly?
Kelly Burdge: The first record could best be described as a demo in the sense it was the first time I had attempted to write and sing. I spent a good amount of time collaborating with other songwriters on the first record to assist me with learning the art of writing melodic lyrics. The actual music on that record is incredible. We literally wrote the music for the track â€œStrippedâ€ just weeks after John had departed from Evanescence. I can sense all his feelings and moods at the time every time I listen to the record. Vocally, my performance just was not on point as it needed to be. Live the band had not yet settled on members. At the time John was unavailable to tour so we relied on searching the countryside for the right guys and it just never worked out. I regrouped and went on an inward gut check journey on what to do next. No matter what, I knew I needed to keep writing songs. Several tracks surfaced as singles over the next couple years: “Empty Soldiers”, “Rise Immortal Rise”, and “All Along”. I loved those tracks, but the fire inside was still burning to make another record. John and I had several conversations on what we wanted the record to feel like, and we went to work. Two years later here we are with what I think will be one of the best cover to cover rock records of 2016.
NRR: I know you have already played with a big name trailblazer with Tesla, some true road warriors. Have you gotten any good advice from them or picked up some good habits from watching them while opening for them?
Kelly Burdge: Just try and imagine what it was like for those guys back when they first hit the seen. Money, drugs, alcohol, woman and inflated egos running wild made the odds of long-term survival almost seem impossible. Yet they stuck together through thick and thin, made decisions as a group, and, as a result, are still here today just as strong as ever. The backstage area of Tesla says it all. What used to be bottles on top of bottles is now replaced with juicing machines and healthy snacks. The message that sends to newer bands speaks volumes to those willing to learn. You will not get anywhere in music business today by drinking every night and being irresponsible. On a personal level, earlier this year I was talking to JK (Tesla frontman) about our new record and how I thought we definitely had a few chart-worthy songs. He looked at me and said, â€œKelly, we write songs for the hearts, not the charts.â€
NRR: Since the Tesla boys have gotten mentioned, what was the experience like filming a music video at a tour stop opening for the fellas?
Kelly Burdge: Filming our song â€œTeslaâ€ while opening for Tesla in front of a sold out Hobart Arena crowd was one of those moments in life you never want to end. While writing the song, I always envisioned the video being done exactly the way it turned out. The crowd was amazing and responded very well especially since it was the first time most of them had ever heard it. If you watch the video, you can feel the authenticity. Tesla has the most loyal, respectful and supportive fans in the business.
NoMara – Tesla official music video