Josh Key took a few minutes to sit down with Erich Morse of National Rock Review to discuss the new album, beer, and well, tacos.

NRR: Obvious question(s) to start: How did the song for Bruce Campbell come about?
Josh Key: First of all, I have to say that Bruce Campbell has actually heard and APPROVES of this song. He tweeted about it. This fills me with a joy that I feel is going to burst out of my chest like an alien from Aliens.
It’s a song we had thought about doing for a long time but it just never happened. Then, for a our last album, we did an Indiegogo fundraiser to build a recording studio for recording Revenge of the Vengeance. One of the perks people could get was that we wrote a song about whatever you wanted. Someone bought the perk and requested a Bruce Campbell song. It was like, “Oh, it’s ON now!” Felt like destiny.

NRR: I’ve seen a few descriptions of your style, but in your own words give me how you see your style of comedy metal/hardcore?
Josh Key: We are the Double Decker taco of metal. The crunchy, meaty taco inside is the metal, and the flour tortilla slathered in refried beans is the fun. The fun doesn’t take away from the metal, it adds to [it]! And now this interview has made me hungry, two questions in. Thanks a lot.
NRR: Have you found it hard to get booked to play tradition metal scene venues or have you actually found it easier to book because of the difference you guys can provide to a night’s billing?
Josh Key: …Usually we get compared to System of a Down or Dethklok! Regardless, venues aren’t a problem because we’ve toured so long, but there’s definitely some hesitance to book us on metal tours, although we’re slowly proving that we belong on those bills. For example, we played Noktis Metalfest in Calgary, Canada with Venom and Pig Destroyer a couple of years ago, and it went over well. In general, if you do something too different, it’s difficult to get booked.
NRR: I have to ask what is the preferred beer of the band and why hasn’t there been a self-labeled brand yet?
Josh Key: I think I can confidently say that Breckenridge Vanilla Porter is universally approved of by all in our camp. No one will ever turn down one of those. As for self-labeled beer, a great question, which I will answer with another question… How do you know we aren’t working on it right now?
NRR: Tell me about the new album, “Revenge of the Vengeance”. Being that you are now a Chicago based group, what would you want a new fan to take away from the album more then anything else? 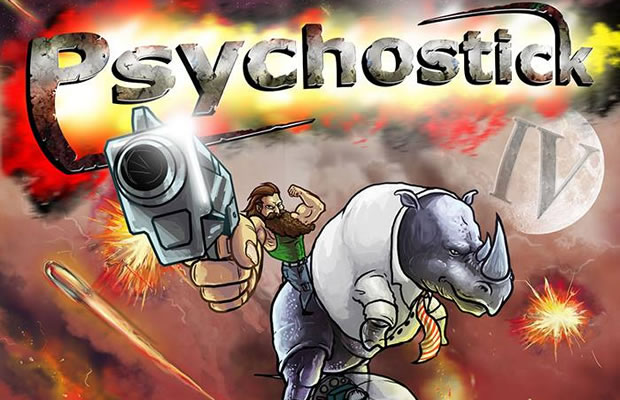 Josh Key: That we have fine-tuned the art of making a Psychostick record. We wanted this to be solid from beginning to end, good pacing with no fluff. We took out repetitive parts, and trimmed space out of our skits so that nothing drags. Everything was thought out, tested, argued over, then thought out again until all of us were just like, “Yes. This is good shit.”
NRR: You’re big enough to headline a tour without a doubt. What band would you want your manager to call up and say, “Hey, the group wants you to open a US tour with them”, and see them drop everything for it happen?
Josh Key: Vomitron. The coolest video game metal cover band I’ve ever heard, I came across them on Spotify. Unfortunately, I don’t think they tour or even do live shows, it’s a studio project.
NRR: You guys have played many already, but summer festival season isn’t too far away. A lot like the last question, which festival would you love to be on a stage with or what festival do you think would be the best for the band, and be fun to do as well, that you haven’t already played?
Josh Key: Mayhemfest, of course. We’ve actually played a couple of those as a Jagermeister band opening up, and did great. We stick out in a good way on a metal festival like that, it changes things up. [We] want to do the full tour and be somewhere in the middle of the lineup.
NRR: You’ve been together since 2000 from your bio as a group, give me the best Spinal Tap moment or other experience that still makes you laugh or shake your head when it gets brought up.
Josh Key: We once played a show at a venue called the “Catastrophe”… and the show was totally a catastrophe. There were neighbors behind the club that kept calling the cops and making noise complaints. We had to turn our amps down in the middle of our set. [And] then again. Then the band after us had to turn down. [And] then again. [And] then again. Then finally, the guitarist’s amp was so low that it almost wasn’t making sound. It was like trying to put on a metal show while Mom was trying to sleep upstairs.
NRR: You have to love music to be in a band and still enjoy the process. If it wasn’t for the love of the music and the band, what would be your day job(s) in place of the pursuit of the rock dream?
Josh Key: Rob and I were both web designers before we started touring. I was getting into programming, and wanted to program video games. I love sitting in front of a computer and creating. Now I just do that in the recording studio… I took up audio engineering [to] record and mix our records. I LOVE SOUND!

“A bit ironic, the ‘serious subject matter’ band was the fun side project, and Psychostick, with silly subject matter, is the serious project.” ~ Josh Key

NRR: How important are the bandcamp’s, Facebook’s, YouTube’s of the world not only to get the music out there but also to stay in touch with your fans?
Josh Key: Extremely. We actually got our start because the Beer song video went viral before viral was even a term. When social media came out (MySpace being the first), it gave us a way to communicate with fans who had discovered us. The downside to social media is that people don’t check out websites as much anymore because they expect everything to come to them in their feed. But then you are competing to get seen against everything else in their feed. It can get pretty goofy, too… sometimes we’ve gotten as many likes from posting funny pictures as we have from music videos in the past.
NRR: On the road day in and day out can be a grind, what do you guys do to stay occupied traveling to the next show?
Josh Key: Sleep. Then you wake up, and then you sleep some more. Unless it’s your turn to drive. Then you sleep. Then you wake up at the venue.
NRR: You guys are all accomplished musicians, has there ever been a thought to do a non-comedic album?
Josh Key: We have, it’s called Evacuate Chicago. It’s Rob on vocals, Alex on drums, and myself on guitar and bass. It was well received, but Psychostick is still our priority. A bit ironic, the “serious subject matter” band was the fun side project, and Psychostick, with silly subject matter, is the serious project.
NRR: I have been where “Blue Screen” takes a listener and “So. Heavy.” pokes fun in an appropriately metal way at itself. But I have to ask if “NSFW” was an attempt to have a song that could never be played on over the air stations in the States?
Josh Key: I really can’t remember how the idea came, started with the idea of a couple of lines being nothing but the word “Fuck”, which got taken to the ultimate extreme of being an entire song filled with nothing but the word “Fuck”.
NRR: Is there a favorite track off of the newest release that won’t get old after playing it 100 plus times out on tour?
Josh Key: So far, “Bruce Campbell” is always a fun one to hit. Every time that song comes up in the set-list I’m like, “YEAH!” It always goes over well and isn’t super high energy like the others, so it’s a chance to catch our breath. 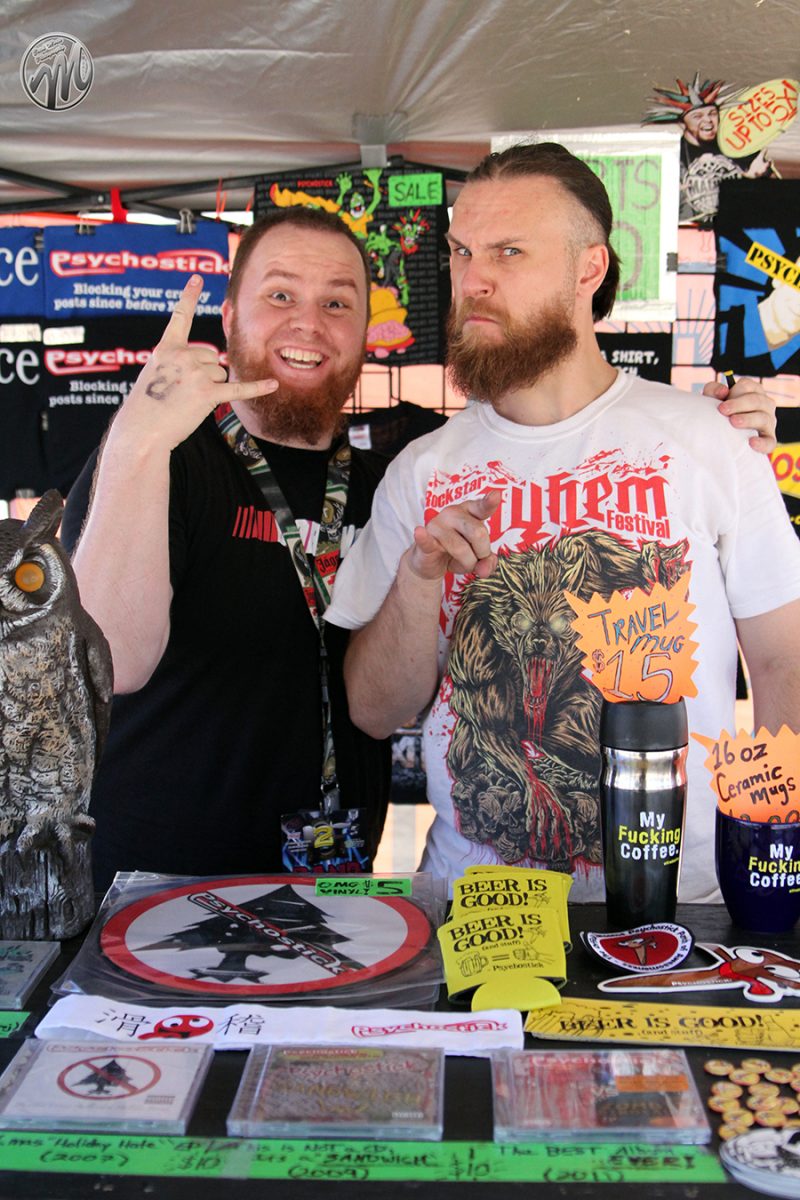 If you’re curious as to the newest release, Revenge of the Vengeance, check out the National Rock Review write up of it here.

A few dates for the Revenge of the Vengeance CD Release Tour Part 2 with Downtown Brown and Urizen are listed below. Check the guys out and feel free to let us know what you thought of the show.