Howie D. from Hard Edge Radio and National Rock Review recently spoke with Hank Shermann from Mercyful Fate and Denner/Shermann. They talked about the early days, his first guitar and what got him into music, the new project Denner/Shermann with fellow original Mercyful Fate guitarist Michael Denner, how he feels it’s finally alright to be older and play heavy metal in this day and age, why he doesn’t plan on giving music up anytime soon, and more.

Hank Shermann started playing guitar back in the late 70’s thanks to being heavily influenced by KISS and guitarist Ace Frehley. He’s been going steady since that day and has many credits to his name including; Mercyful Fate, touring with Volbeat, several solo projects and the latest project with ex-Mercyful Fate guitarist Michael Denner. Denner/Shermann have just released their debut EP, Satan’s Tomb (Metal Blade Records), and are currently in the process of writing more songs for a full-length release in the near future. Hank also mentioned that while a Mercyful Fate reunion would be nice, his main priority at this time is this new project with Michael Denner.

The interview with Hank Shermann of Mercyful Fate and Denner/Shermann: 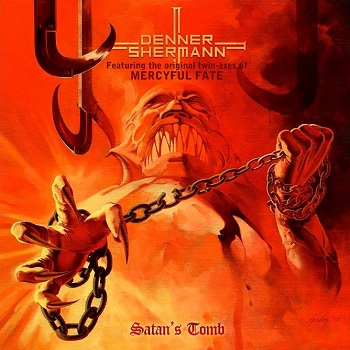