Bands come, and bands go. But the dedicated musicians find a way to create the music in their heads given enough time, queue Billy Keeton.

Regarding bands chronologically speaking, Audiotopsy, is still a babe in the woods. However, Greg Tribbett (guitar), Matt McDonough (drums), Billy Keeton (vocals), and Perry Stern (bass) have seen a time or two around the block and relish the new adventures. The guys will be touring the foreseeable future in support of the new album, Natural Causes. The Loudest Month in Music is about to get a little louder with these guys helping push things to eleven.

NRR: Thanks for taking some time out to answer some questions for National Rock Review. What’s been going on with the band, Audiotopsy, in 2016?
Billy Keeton: We’ve been gearing up for supporting the record, Natural Causes, rehearsing as well. We shot a video for our single “The Calling” and recently did a tour with All That Remains, Devour The Day, and Sons of Texas. 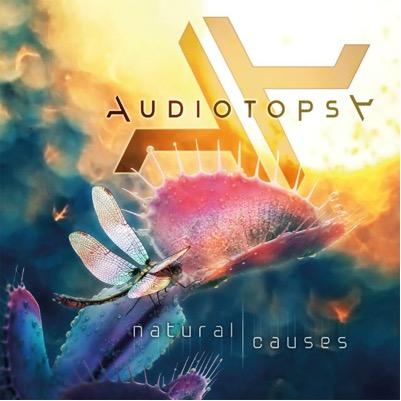 NRR: Okay, so your debut album is Natural Causes; if my ears weren’t horribly wrong, and came out in October of last year. How did the process go with self-producing the album and just using Tim Laud to engineer the LP? With the experience of all the band members in previous stops, was that really the only way to make sure it came out with the “Audiotopsy” sound?
Billy Keeton: Our D.I.Y. process was easy and natural. We were confident we could do it ourselves. Our sound was born from the four of us being plugged in and in the moment. It’s just its own thing with a no rules approach. We never once plugged our other bands sounds into the equation.
NRR: I’ve seen your sound described as everything from prog hard rock, to alt metal, to even post-grunge. For the vibe of the band, how would you describe it to new listeners in the band’s own voice?
Billy Keeton: I will say that its progressive hard rock.
NRR: Fair enough. How did the group come together and were there any growing pains or has it been a fairly smooth transition into a new musical entity for everyone?
Billy Keeton: Greg and Matt had been getting together and laying down tracks and when it came time to find a singer they thought of me. Greg got my number and called me up asked me if I wanted to sing basically. I was already working with Perry, so we just brought him in. From there we started the recording process. Audiotopsy was born, and it’s been great we all work very well together.
NRR: We’ve recently lost a few big names in music with Scott Weiland to Lemmy and Bowie, and more recently Glenn Fry passing. Is longevity the dividing line between being a rock legend and a guy that lived way too fast and will be remembered more for his drug demons then maybe his music?
Billy Keeton: We all want to be in this game as long as we can but when your time is up its up. That’s it; it’s your time. But people will always remember the music first.
NRR: You have been labeled as a sort of super group even though I really dislike the term. Has there been any experiences from other times in other bands that have made things easier to just worry about making great new music with Audiotopsy?
Billy Keeton: We’re just a band not a “supergroup.” For sure, having made some great records in the past, made writing this record seem easier. We were all on fire.
NRR: For a new fan listening to the debut record for the first time, is there one or two things that you’re really proud of how it/they turned out and hope they hear it that way as well?
Billy Keeton: Love the way “Frozen Scars” came out, and I really dig the way the vocals came out in the bridge of “Darken The Rainbow.”
NRR: What has been one or two of the more difficult lessons you’ve had to learn since you started out to make your mark in music that you would pass on to new artists just starting to figure things out on their own new journey?
Billy Keeton: Work on your own sound, perfect it, own it, live it, and do it for the art. It has to be sacred.
NRR: Is there a moment, that thinking back on it now, in the your career, either with prior stops or with the band now, that you can’t help but still feel a tad bit embarrassed about, makes you laugh about despite yourself, or just still makes you shake your head in disbelief? A Spinal Tap moment if you will, that you’d be willing to share with me?
Billy Keeton: I’ve fell down on stage a few times that always sucks. Nothing really major though.
NRR: Do the big festivals like the Carolina Rebellion and say Rock on the Range have a different feel to then that just makes them a bit more special for a band like you guys?
Billy Keeton: Definitely, big festivals rule for any band.
NRR: How does the group go through the writing process, is it all one person with help or is it a group effort from start to finish?
Billy Keeton: It usually starts with a riff from Greg then Matt does his thing then vocals and bass.
NRR: Tell me about the name, Audiotopsy. I know this is one of those dreaded questions. Is there a story behind the name or was it a random thought that sounded good and stuck?
Billy Keeton: Matt came up with the name. It was a name he had on a long list of potential band names. We all liked it, and felt like it was the one.
NRR: How is the experience with Napalm Records? Is it still better to have a label behind you even in this day of DIY, especially with self producing the album?
Billy Keeton: Napalm is great! Its very important still to have a label even if you are doing everything yourself. It gives you the ability to do more.
NRR: Has there, or might there be, a time when a show got/gets scheduled because it’s close to something the band wanted to see/do on a day off just to recharge, and if so what was/would it be?
Billy Keeton: No not once! Ive always been at the mercy of the schedule in place, but maybe someday we can do that.