Richie Kotzen took a few minutes to talk about his new album, Cannibals, life on the road, and Wii basketball with National Rock Review.

Richie Kotzen has led a very interesting musical career. From learning the guitar at an early age because of the band KISS, to releasing his first solo album in 1989, Richie has the credentials of someone that has earned his stripes. Having fun playing with the “super” band, The Winery Dogs, and finishing up a solo tour in Japan, Richie discusses life.

NRR: Tell me about the album, Cannibals, the background on it.
Richie Kotzen: Well, this record just released and its got some interesting things on there. One of the highlights on the record is a song I wrote with my daughter. And it’s a very different sounding song for me because it’s something that she actually wrote on the piano. I later put lyrics to [it], and the song is called, “You”. And, it’s kind of a introspective type song. It really stems from this piano piece she had been playing for many years. To a certain point after listening to this over and over, one day I asked her. I said, “August, what is that that you keep playing?” And she said, “Oh well, it’s something that, something that I wrote.” And I said, “I really like it. Let’s record it.”
So we recorded the piano part and… it sat on my hard-drive for many years. And this past summer I found it. And I was listening to it again. I thought this really needs to be a song. So, I had the ideas for the lyrics and I worked on them. And that ended up being what you here on the record. We, we did a music video for it. That’s actually out on YouTube so people can see it. That’s probably my favorite thing on the record, just because of the way it came about, you know what I mean?

NRR: You are a very prolific artist, if a new person comes across you or this album, what would you like them to take away from the album other then the background story to the song “You”?
Richie Kotzen: To be honest, I really don’t think totally in the terms of what I want people to take away, I think music is personal for everyone. So, I think that I am an artist that I kind of do whatever it is I feel like doing. Buying one of my records is not like buying a normal record from a band where you know… if you buy a Foo Fighters record you know what you’re in for. Not to say they’re not diverse, but there’s a consistency from song to song, a similarity in the production and core progressions in what they do. That’s what people get connected to.
With someone like me, you have a song like “Cannibals” and then you have one like “You” and then a song like “Shake It Off”. Those three songs are kind of stretching artistic boundaries, and it’s all me it’s all my perception. I think the scope is wider as far, as far as a genre if you will. It’s hard to kind of define, you know, by nature I guess I’m a rock artist but there is so many other elements of music in what I do. Everything from R & B to glam rock you know, it covers a wide scope, you know? Partially because I’ve been putting out records for so long, but it doesn’t matter to me what someone takes away as long as they make a personal connection. That’s the most important thing is… you know, someone makes a personal connection to a song, a lyric, then I’m happy with that. 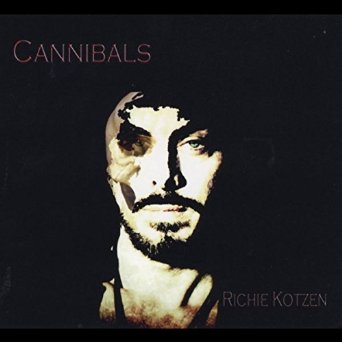 “I was using Steve Nash a lot. Every time I went up for a three, I was making them. Guys I was playing with were getting pissed. It was pretty funny. (Laughing)” ~ Richie Kotzen

NRR: Are there plans for a tour in support of the most recent album?
Richie Kotzen: In support of Cannibals? We’ve been out for three months. We did Europe, [and] we did South America. We did the United States. …Because I’ve been out touring so much, I’m just going to take a break from touring for a while. I really feel like I need it. Just because of the fact that I went from a long Winery Dog tour directly into a fairly long solo tour. I need that balance to stay fresh and stay inspired. The plan is to go to Japan and do the four shows. We’re going to record a live DVD in Tokyo. After that, I’m going to go home and focus on writing material for The Winery Dogs. In a perfect world, I’ll go back out on tour with The Winery Dogs at the end of the summer.
NRR: Is there any band that you’d love to have go on tour with you for that summer/fall run?
Richie Kotzen: There are a lot of bands out there that would be fun packages. The guys in Alice in Chains are friends of mine. It could be a fun package if they were to tour which I don’t think they are. You know the reality is, is that, sometimes I really just enjoy doing our own shows. Because we’re playing to our audience. As cool as it is to be out with other bands, you’re playing for the most part to their audience. If you buy a ticket to see whoever it is, if you buy a ticket to see U2, you want to see U2. I think, my desire, which is to make a great record, and get out there and do like we did last time and elevate that to another level. And enjoy the fact that the band [The Winery Dogs] is well received.
When the new The Winery Dogs material is close to release, stay tuned to National Rock Review for all the important information on it and tour dates that may come to your neck of the woods.