Presented by Colne Town Council, The Great British Rhythm and Blues Festival is shaping up to be the best blues-rock based event of the year – and not just because of the quality and quantity of the acts performing. 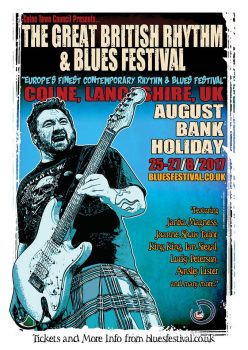 The event has over forty artists on the ticketed main stages alone, including many top international acts from the world of blues, roots and beyond.

Stars such as King King, Joanne Shaw Taylor, Ian Siegal & Band, Lucky Peterson (USA), Janiva Magness (USA), the Stevie Nimmo Trio, Jo Harman, Aynsley Lister and Gwyn Ashton (Australia) are all lined up to play. Aside from the Main Stage acts, there will be other live performances across various venues over all three days (25th – 27th August 2017).

The festivalâ€™s ‘Road House’ performances offer an intimate setting to hear some of the best new, and established blues and roots musicians showcasing their talents. Set across nine venues hosting thirty-plus shows over the course of the weekend, featured artists on these stages include Jack Hutchinson, Mike Ross, the Mark Pontin Group, and many more. All of the ‘Road House’ shows are free-to-enjoy.

The Great British Rhythm and Blues Festival also nurtures new talent, as festival director Jason Elliott explains: “This event is bursting with talent, some of it as yet undiscovered. We’re proud to be showcasing and cultivating such a wide variety of musicianship and to help these musicians – in any small way – achieve, succeed and thrive. Think a northern UK blues-roots style event, akin to SXSW Conference & Festivals, Austin, Texas”.

One such example is Alex McKown who, in 2008, was taken backstage at The Muni venue in Colne during the blues festival to meet one of his idols, Walter Trout. Roll forward nine years to a 20 year old Alex McKown (now a six times finalist in the British Blues Awards) who is appearing at the 2017 event on the very same stage as his idol did.

So, this tremendous amount of talent and no end of festival fun takes place in the beautiful town of Colne in Lancashire over bank holiday weekend in August. Now in it’s 28th year, the event is well supported and much-loved; and 2017 promises to be something really rather special.

For further information on the festival, including everything from camping accommodation, to tickets and fully scheduled line-ups, events and timings, head to the official website: http://www.bluesfestival.co.uk

Ian Siegal & Band – celebrating 25 years of professional touring with his songs that are real, shows that resonate and vocals served raw +
The Lachy Doley Group – “The Jimi Hendrix of the Hammond Organ” +
Tom Attah & The Bad Man Clan – A modern, living bluesman…

Over the course of three days, in excess of 100 acts will perform across the twelve official venues at this year’s Great British Rhythm and Blues Festival in Colne. Tickets are proving HUGELY popular, so make sure you don’t miss out and get your tickets in advance via the official Blues Festival website.