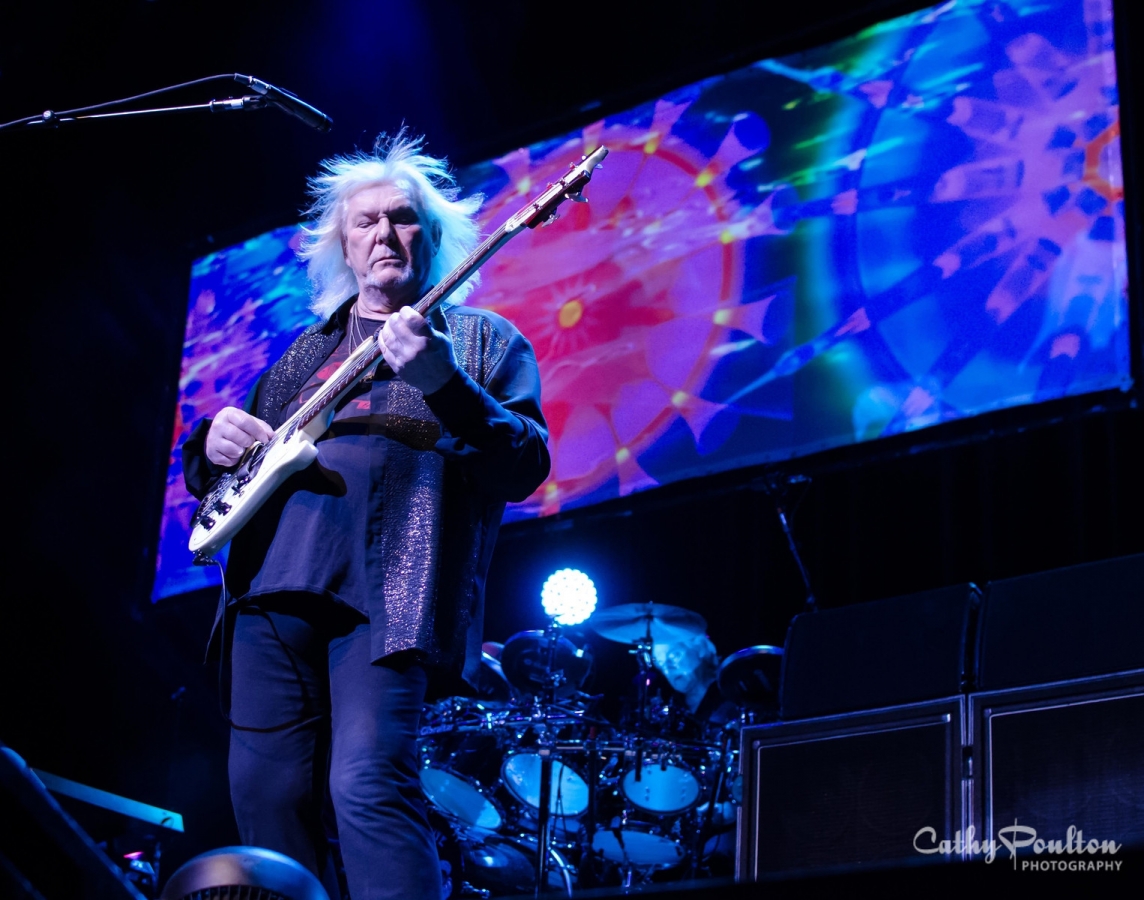 A few thousand fans packed the Borgata Event Center in Atlantic City, New Jersey Friday night to see legendary rockers, Yes. Over the last decade or so, their tours have been more of a greatest hits type show. But tonight, they played three of their albums in their entirety.

Having seen the original version of Yes multiple times at the now defunct Spectrum in Philadelphia during the day, I wasn’t sure how I’d feel seeing them without Jon Anderson and Rick Wakeman. However, having just seen Steve Hackett and his Genesis Extended Tour last, I was feeling nostalgic and decided to give them try.

I’m guessing the majority of the audience were from the Philly/South Jersey area. This region was an early supporter of the 70’s progressive rock movement and bands like Yes, Genesis, and Emerson, Lake and Palmer loved playing here. This version of Yes tonight included guitar greats Steve Howe and Chris Squire, drummer Alan White, Geoff Downes on keyboard, and singer Jon Davison.

The show started off with a slide show on a large screen of magazine articles, early band photos, Yes album covers (which got some applause as each came on), and ended with a photo of the current lineup. It was backed by the music from The Firebird Suite.  The show opened up with Close to the Edge. Having not seen them perform in decades, I got goosebumps when I saw Howe with his beautiful guitar, his beloved Gibson ES-345.

Next was And You And I, which received the first of many standing ovations throughout he night. They ended this set with Siberian Khatru. It brought back great memories from their performance (in the round) in Philly in 1979.

The second set started off with, Going For The One. It was a fun to see Howe stomping away on his pedal board. It looked like he was really enjoying himself on this number. The band performed beautiful versions of Turn Of The Century and Wondrous Stories, the later accompanied by some great lighting effects which complimented the song.

Geoff Downes (keyboard) was awesome on Awaken. Squire, armed with his triple-necked bass, made it even more perfect. It was a slow set and it let the crowd relax a bit which was perfect as they’d be needing their energy for the closing album to be played (the Yes album).  What impressed me the most were the vocals from Jon Davison throughout the set. He was great and the audience responded well to him. They band was met with a thunderous standing ovation, then took a 20-minute intermission.

They returned, starting with the classic Yours Is No Disgrace, backed by some great drumming by Alan White. Steve Howe pulled up a chair and slowed it down, going solo with Clap. The audience really got into Starship Trooper by clapping along.

This show was reserved seating only, but I was standing next to a group of young women to the right front of the stage who literally danced and sang throughout this entire album. They were especially loud on I’ve Seen All Good People. They were obvious fans of Chris Squire as he acknowledged their enthusiasm many times with a smile and a nod.

The shows encore was Roundabout, from the album Fragile. For fans that love that album, Yes is kicking off a 35-date summer tour which starts in Boston on June 8th. They will be playing that entire album, as well as Close To The Edge, some of their greatest hits, and a few numbers from their forthcoming album, Heaven and Earth, due out in early July.

I have to say, I was pleasantly surprised tonight. Singer Jon Davison did a great job. Of course, it would be nice to see the originals members of Yes play just one more time, just as people are waiting on Peter Gabriel with Genesis. There will always be a hardcore fan base waiting for an original line-up reunion, who boycott tours and new material by a new line-up, being unwilling to give them a chance.

I get it; I respect their loyalty…to a point. But, it is a shame actually. All I know is tonight I got to see some of my favorite guitarist’s at work, sang along with thousands of other fans to some of my favorite Yes songs, had some goose bump moments, and walked out of the venue happy as could be.

For the young fans in the audience (and there were many) who never got to see them in their heyday, tonight was certainly the next best thing, and it was way better than sitting home listening to their old records. You’ll get another shot of seeing them live this summer. I would highly recommend it.