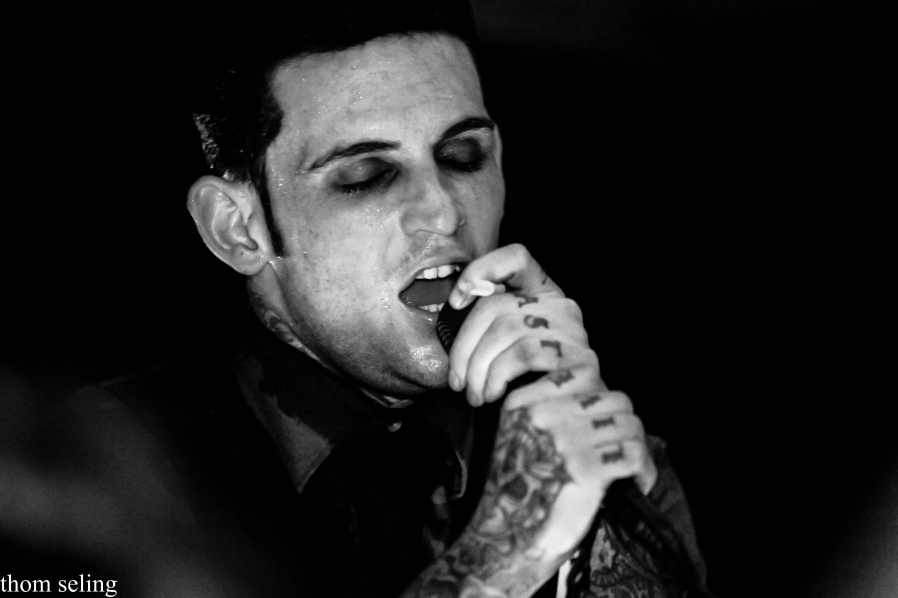 The â€œRevel Without A Causeâ€ Tour made a pit stop at the Pike Room in Pontiac, MI on 11/29/13. The tour featureâ€™s William Control, Davey Suicide and the Fearless Vampire Killers. The 100+, mostly underage, crowd seemed to LOVE every minute of it!

They split their vocals between two vocalists, have some decent hooks and are a very animated live act. They play gothically inclined alternative rock songs with a little punk mixed in. Highlights, was the song All Hollows Evil and a cover of Phil Collinsâ€™ Easy Lover. The crowd spent the whole time waving their hands back â€™n forth and bouncing along to their songs. This, promising, young band will, most likely, get bigger with more tours here in the US.

Next up was Davey Suicide. Davey comes to us from the dirty, gritty, and seedy under rock world of Los Angeles, California (UnHolywood, Killafornia, as Davey likes to tell his fans!). Playing, alongside him, was Brent Ashley (bass), Drayven Davidson (drums) and another on guitar. Daveyâ€™s music is a mix of goth punk industrialized heavy metal (Marilyn Manson comes to mind) while the band thrashes around with an energetic theatrical live show. He has built a loyal following due to a constant touring schedule and remains one of the most recognizable figures within his genre.

At one point, Davey had the crowd pumping their fists in the air and chanting along to the song God Head Killers then had the crowd swaying back â€˜n forth, mesmerized to the mellow groove of One More Night. The highlight of his set was the song, Generation Fuck Star, an anthemic call-to-arms for the 21st century disillusioned & disenfranchised youth. The song is heavy, powerful & pissed off! Davey also told some personal stories that his audience seemed to relate to. He is very personable with his audience and seems to be in music for the long haul. He is the perfect mix of Rob Zombie & Marilyn Manson with a little Axl Rose swagger!

Headling the show was William Control (Wil Francis of Aiden fame). Alongside him were Kenneth Fletcher (bass) & another on keyboards. Originally the front man for the rock band Aiden, mastermind William Francis created William Control to create music that did not match the style of Aiden. It is an outlet for Wil to experiment with musically. This was a great move for him! He has built a large fanatic following with his enigmatic post-punk gothic dark electronic rock music.

They have had several tours opening for acts like Escape The Fate, Jeffree Starr & Black Veil Brides and are now out on a headlining tour. Wil is the perfect front man for the dark wave generation. He oozes charm and knows how to get the crowd in the palm of his hand. It was as if Wil had the audience in some type of hypnotic trance. He had them bouncing, waving their hands in the air, swaying and dancing to the music for the entire set. The crowd did NOT take a break. They danced along to such great tracks as The Velvet Warms And Binds, New World Order & Kiss Me Judas. The audience belonged to Wil for the entire set!

Wil mixes the charisma of Andrew Eldridtch & Ville Vallo with the swagger of Frank Sinatra. He has the look, he has the voice, and he knows how to entertain the crowd. Even if you donâ€™t like the music, William Control is worth seeing just for the tricks Wil can pull off with his microphone! Whether swinging it above his head or launching it into the air and catching it just in time to sing the chorus, he pulls it off flawlessly. Those that missed the chance to see William Control will have a second opportunity when they come back to the area in April on a tour with Combichrist.