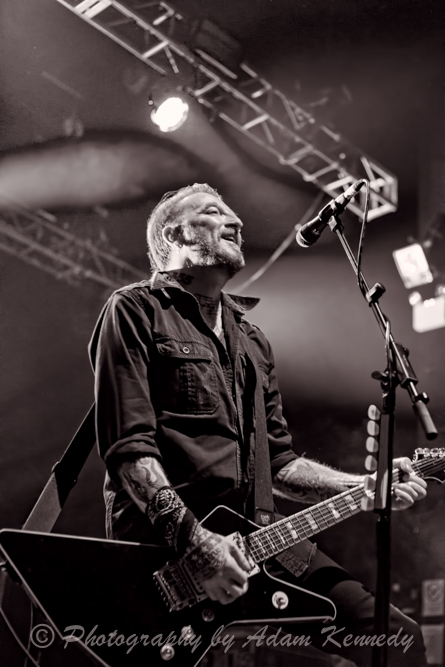 Tonight sees the homecoming of one of Newcastleâ€™s most successful hard rock bands, The Wildhearts.  Last year marked the 20th anniversary of their celebrated album, Earth vs the Wildhearts. I remember seeing the band on that tour the first time around.  The Wildhearts reunited this time with Scott Sorry back on bass duties joining Ginger, CJ, and Ritch.

The night kicked off with Anglo-American hard rock band Hey! Hello!, from New York featuring none other than Wildheart frontman, Ginger Wildheart on guitar.  Lead vocalist Victoria Liedtke, reminiscent of a young Debbie Harry from Blondie, danced around the stage, telling the crowd, “You should stick around… I hear the other bands are pretty good” giving a mischievous look to Ginger.  The band brought their set to a close with their single Swimwear from the Hey! Hello! dÃ©but self-titled album.

Next up was the Finnish band, The Von Hertzen Brothers.  The five-piece band formed by three brothers, Mikko von Hertzen (lead vocals, guitar), Kie von Hertzen (guitar), and Jonne von Hertzen (bass), brought their brand of psychedelic rock with a deep groove to the Newcastle crowd and were watched from side stage by Ginger Wildheart.

The crowd was now warmed up and ready for the Wildhearts.  The band took to the stage to the classic Nothing Ever Changes but the Shoes before smashing their way through a crowd pleasing, career spanning, greatest hits set.  The loyal Wildheartâ€™s fans lapped it up pogoing and crowd surfing their way through the likes of Caffeine Bomb and Suckerpunch. The floor even started bouncing during Vanilla Radio.  Front man Ginger told the Newcastle crowd they had looked forward to this show since the start of the tour.  The Wildhearts finished their main set with the classic I Wanna Go Where the People Go, complete with flying scissor kicks all round.

The band returned to the stage to rapturous applause from the crowd and played Geordie in Wonderland, much to the pleasure of the Newcastle crowd, arms aloft swaying from side to side.  CJ told the audience this was the best time he has had in Newcastle.  Scott Sorry took to vocal duties on The Only One.  The band also played a great cover of White Lies by Jason and the Scorchers which according to Ginger, is the greatest song ever written. They brought their set to an emphatic ending with 29 x The Pain.

The Wildheartâ€™s Set List:
Nothing Ever Changes but the Shoes
TV Tan
Nita Nitro
Sick of Drugs
Caffeine Bomb
Vanilla Radio
The Revolution Will Be Televised
Someone That Won’t Let Me Go
Mazel Tov Cocktail
My Baby Is a Headf*ck
Suckerpunch
I Wanna Go Where the People Go

Encore:
Geordie in Wonderland
The Jackson Whites
Greetings from Sh*tsville
Stormy in the North, Karma in the South
Junkenstein
The Only One
White Lies Play (Jason & The Scorchers cover)
29 x the Pain